The Captain of the police from Golden City.

Carl (カール) is the farmer in Sart Farm that attacks the Servbots with a pitchfork.

Diggers that appear inside the Shala-Kun Ruins. They are voiced by Mitsuru Ogata and Mami Horikoshi in Japan.

Anna is a pregnant woman in Apple Market.

Art, known as Artillery (アーティラリー, Artillery) in Japan, is a young researcher (and apparently a Digger) that wants to solve the mysteries of Kattelox Island, appearing around the island during the game. He was planned to be Mega Man Volnutt's rival for Roll Caskett's affection.[1]

Ira (アイラ, Aira) is a young girl that is in the Uptown hospital. She is very ill and is confined to a wheelchair, unable to walk, and the hospital does not have sufficient equipment to help her. If MegaMan donates 15,000 Zenny to Amelia, the hospital will receive the technology and Ira does get better. As a thanks, she will give MegaMan the Flower Pearl.

Jim (ジム), Osh (オッシュ) and Bensley (ベンスリー) are a trio of rascals that lives in Downtown. In the beginning of the game they suspect Tron Bonne is a pirate and try to warn the police about her, but no one believes them and they sent a dog called Paprika to chase her. They later ask Mega Man to help them build a "secret base" in Yass Plains by finding tools. After completing their base, Mega Man can exchange three items with Jim, one of them, the X Buster, being necessary to create the Shining Laser.

The Museum Curator (美術館館長 / 美術館の館長さん, Bijutsukan Kanchou / Bijutsukan no Kanchou-san) is the curator of the art museum in Kattelox Island.

The curator is first seen making a painting of the hospital in Uptown. If Mega Man Volnutt talks to her, she will say that something is missing in her painting and asks him what she should add. If the player says red, she notes that she has no red paint, but thinks her painting is a little drab without it. Mega Man can help her by taking a lipstick in Apple Market to be used as a makeshift red paint. After giving the lipstick, the curator finishes her picture and returns to the museum, opening it. Mega Man can help her further by donating specific objects he finds in ruins for exhibition, increasing the number of visitors.

Wily (ワイリー) is the owner of a boat house in Uptown that had his boats stolen by the Bonne Family, which were probably used to create the Balkon Gerät. He lends his remaining boat to MegaMan and Roll Caskett in order to reach the Lake Jyun Sub-Gate.

He has a short mention in The Misadventures of Tron Bonne, where his name appears in the back of a boat that was "borrowed" by the Servbots to use in the harbor missions.

Maria is the owner of the bar in Yosyonke City. She found Joe hurt and without memories 10 years before the events of the game and took care of him. After Mega Man obtains the last key, she moved with Joe and her daughter to another island.

Johnny (ジョニー) is a man that works with the Guildmaster in Nino Island. He helps Mega Man against the Birdbots invasion, using a fire extinguisher in cannons that are damaged and placing crates in front of the first gate.

Mad Mossa is a man in Komotoma City that takes care of the golden statue of the city's founder. If the statue is destroyed in the battle against Blitzkrieg, he will accept donations to restore it. He was a fast racer known as "Mad Mossa" when he was younger, and holds the top records of three racing courses: Manda Circuit, Calinca Circuit, and Saul Kada Circuit. After the statue is restored (or didn't broke), he challenges Mega Man to beat his records in the courses. 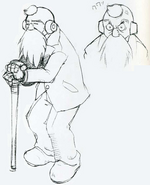 Concept art of the Guildmaster.

Concept art of Mad Mossa.
Add a photo to this gallery

Retrieved from "https://megaman.fandom.com/wiki/List_of_minor_Mega_Man_Legends_series_characters?oldid=329318"
Community content is available under CC-BY-SA unless otherwise noted.