List of minor characters from the Mega Man game series.

Cavemen seen in flashbacks from Super Adventure Rockman. When one of them touched Ra Moon, his hair became white and he became vicious, apparently becoming a leader that waged war against other cavemen.

In promotional art for the Mega Man 2 boss character contest, Dr. Wily appears tinkering an unnamed yellow robot that never appeared in a game. Several years later the robot was used briefly in a flashback from the manga Mega Man Gigamix volume 2, where Dr. Light and Dr. Wily built him together when they were young.

Light and Wily with the robot in a Mega Man Gigamix postcard.

When Duo was helping Mega Man in the ending of Mega Man 8, four images of Mega Man's memories are shown, three of them having him dealing with unknown robots. The first scene shows Mega Man fighting against three red flying robots that can attack with electricity, in the second he saves a dog, in the third he stops a robbery, and in the last he saves two kids from a big robot with treads and hammer arms.

The chairman from the committee in the opening from Mega Man 11. He is voiced by Chris Smith in the English version and by Masaki Terasoma in the Japanese version.

The Day of Σ criminals

A group of Reploid criminals that appeared (dead) in Chapter 3, of the Mega Man Maverick Hunter X OVA, The Day of Σ. They were supposedly hired by Sigma to hack industrial Mechaniloids stationed around Abel City, causing them to rampage. He later executes them to keep them quiet about his involvement in the events.

In the image to the right, the pair on the left are simply referred to as mass-produced criminals, one of them being named Mannequin Seawater.[1] The short, stocky yellow Reploid is identified as the criminal leader and the skeleton themed Reploid to the right of him is called "bone" (骨, "bone").[2]

In the crossover Worlds Unite, Mavericks resembling them appeared as part of Sigma's forces in Sonic Universe #76.

Mannequin Seawater in a screen

The bodies of the criminals in The Day of Σ. 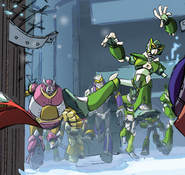 The criminals in Sonic Universe #76

The Day of Σ Maverick Hunters

Several unnamed Maverick Hunters appear in the animation. They appear to be mass-produced Reploid models due to the similarity between themselves and the civilian Reploids seen in one scene. Besides the generic Hunters, in one scene there are three different Reploids inside Hunter Base: A green Reploid, a black panther-like Reploid, and a brown bear-like Reploid.

Several Maverick Hunters in The Day of Σ.

Sigma overseeing the Hunters after the defeat of a Maverick. 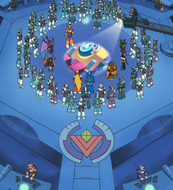 Several Hunters in the Hunter Base.

Various concepts for Maverick Hunters that appear in The Day of Σ. 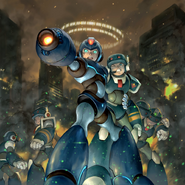 Maverick Hunters in a TEPPEN card.

Unnamed mass-produced Reploid navigators from Mega Man Maverick Hunter X and The Day of Σ. The pink-haired female is a superior version, so there are fewer of her type compared to the blue-haired female model.[1] There is also a male model that seems to be based on the generic hunter except with lighter colors.

The "Green Biker Dude" (abbreviated to GBD), as called by fans of the series, was an unnamed green Maverick Hunter who came along with X in the Opening Stage of Mega Man X2. As his nickname suggests, he is a male Reploid with green armor and rides a Ride Chaser bike. He was destroyed by the shots of a Cannon Driver during the beginning of the opening stage of Mega Man X2 while preforming a wheelie. Since his death, the Green Biker Dude has become a sort of icon to hardcore fans, rallying them to fight in his memory, or more often, a subject of ridicule. His popularity stems mainly from the throwaway or "Redshirt" nature of his single appearance, as he was only onscreen for a matter of seconds before getting killed.

In the Rockman X2 manga, there is a similar character called "Boy" that was killed in the first chapter.

He is referenced in the Mega Man comic. In the story arc Proto-Type, Proto Man calls a human "Green Biker Dude" due to the fact he rides a green bike.

In Zero's story, some Maverick Hunters are seen working for Sigma in a flashback from the time he was the commander of the Hunters. They see Sigma enter to fight against a red Maverick that wiped Garma's unit, and he barely managed to survive the battle. The Hunters initially thought that he was uninjured and became certain nothing could harm him but then are surprised when they see the conditions their commander was after the battle. Sigma then relayed orders to recover Zero as well as contact Dr. Cain in order to have him studied, although when they asked him if he was alright, Sigma slapped the soldier with his remaining arm and angrily told him "silence!" before walking off.

In X's story, after X defeats Colonel in the Space Port, some Maverick Hunters were preparing to follow X to the Final Weapon. They told off Double for causing an accident, causing the latter to apologize. They eventually called Double a freak, although they then noticed Double undergoing a strange transformation, with two of them being killed, and the third ending up killed just as he tried to send an S.O.S. signal to X, with Double covering up his actions by claiming it was a false alarm. Double had killed them on Sigma's orders, and Double went to the Final Weapon in their place to terminate X.

Two Hunters saluting Sigma in the flashback from Zero's story.

Two Hunters seeing Sigma after his battle against Zero.

The Hunters in X's story.

Concept for the Hunters killed by Double in Mega Man X4.

Gamma's Unit,[4] known as "Garuma's unit" (ガルマの部隊, Garuma no butai)[4] in Japan, was a unit of Maverick Hunters that was mentioned by Sigma in a flashback from Zero's past. Zero wiped out all members of the unit, and Sigma decided to fight against the red Maverick himself to avoid more sacrifices. It's unknown if the Reploids seen destroyed in Zero's dream in the beginning of the game were members of this unit.

The unit was also mentioned by Halloween Sigma in the beginning of the Mega Man X DiVE Halloween event "The mysterious master of the Nocturnal Castle".

In the good ending, three years after Sigma's defeat, three Hunters are seen ready to go out in a mission with X to stop a Maverick in HORTE 2146 block. One of them comments that X's eyes have changed and sharpened since the time of Zero's disappearance. Those three Hunters also appeared in the TEPPEN card Supply.

In the bad ending, one week after Sigma's defeat, two Hunters are talking with X about how he and Zero managed to defeat Sigma, but X doesn't remember what happened in the last battle and completely forgot about Zero. Despite that, they think it's a miracle X was able to return safely, and there will finally be peace. One of them asks what is X's dream, and after thinking a bit, X says that someday he wants to create "Elysium", a paradise where the human race coexists with Reploids peacefully. 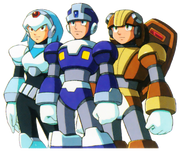 The three Hunters in the good ending

The two Hunters in the bad ending 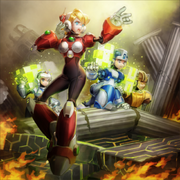 The three Hunters in the TEPPEN card Supply

Two Maverick Hunters seen in the Opening Stage. They got hurt by D-1000, and X told them to return to the Hunter Base and leave it to him.

In Zero's solo ending of Mega Man X6, the "Researcher" (研究者, Kenkyuusha),[5] also known as "Mystery Scientist" (謎の科学者, Nazo no Kagakusha, "Mysterious Scientist"), is an unnamed Reploid scientist that performs Zero's sealing process. He is voiced by Yoshinori Fujita.[6] Players are left to assume that Zero has known him at least long enough to trust his motives. It is implied that this ending leads to the events of Mega Man Zero. Also, the symbol on the back of his clipboard resembles the Square button of a PlayStation controller.

An unnamed type of Maverick Reploid appeared in the opening scene of Mega Man X7. Axl transforms into this Maverick in the scene he explains his abilities to Zero.

Axl transformed in the Maverick.

Axl disguised as the Maverick in the comics.

The Rowdy Reploid is an unnamed Reploid from Mega Man X: Command Mission that reported X's presence to the Rebellion Army during Chapter 2. While approaching X in Central Tower's Air City North Square, he claimed he was not truly a supporter of Epsilon's actions, but as Reploids, they should still support the idea of their independence. He was killed by Spider shortly after.

Saffron (サフラン, Saffron), Cumin (クミン, Cumin) and Jasmine (ジャスミン, Jasmine) are three female Reploid merchants in Mega Man X: Command Mission. They first appear in Chapter 2, where they are rescued by X in Central Tower's Base Security Station and they sell items to him as thanks. After Chapter 2's completion, they move to the Lagrano Ruins' Area 5F-East to sell some of the game's rarest items. The area can only be accessed with the Lagrano Key, found via the Deployment Center after Chapter 3. They also reappear at the beginning of Far East HQ in the game's final chapter.

Three runner-ups from the game's first boss character contest have a cameo appearance in the game as a Battle Memory. The winner, Arcade Man, also appears as a boss.[7]

In the second contest for bosses themed after Japan's 47 prefectures, four of the 47 winners received a Mega Man style design, and the winners of the "Dengeki Game App Award" and "Famitsu App Award" (Udon Man and Sudachi Woman) appeared as Battle Memory.[9]

Later, seven more entries from the second contest were selected and received a Mega Man style redesign, but they did not appear in the game:

Tuly, the mascot of the theme park Huis Ten Bosch, appeared as Tuly Rockman in an event Battle Memory.[13] 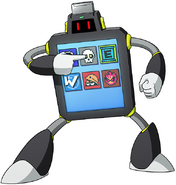 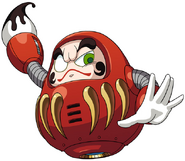 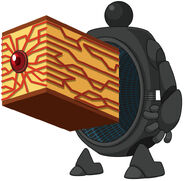 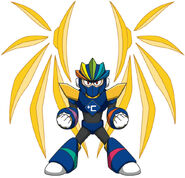 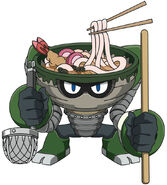 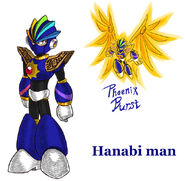 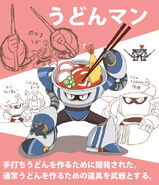 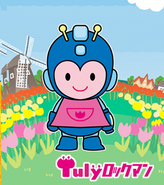 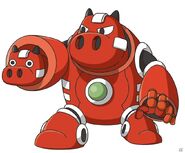 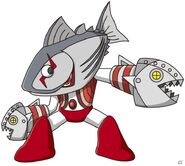 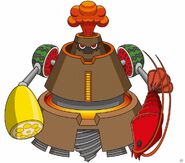 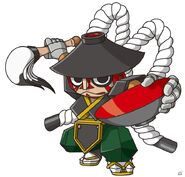 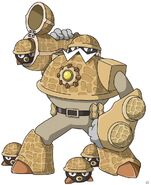 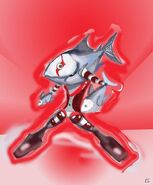