MMKB
Register
Don't have an account?
Sign In
Advertisement
in: Articles in need of cleanup, WWW, Mega Man Battle Network characters,
and 6 more

Lord Wily, also known as Wily (ワイリー, Wairi) or Dr. Wily (Dr.ワイリー, Dokutā Wairi), is the main overall villain of the Mega Man Battle Network series. Though not the main antagonsit of the every game in the series, Wily's actions and influences was the catalyst of almost every threat Lan Hikari and MegaMan.EXE face. He is the biological father of Dr. Regal and the adopted father of Baryl.

Wily is a truly devoted villain, his classic series counterpart. He is driven by madness, greed, and rage from his failure to defeat MegaMan and (indirectly) Dr. Hikari, who he hates. This insanity seems to grow more violent over time, as his plots become more haphazard, and his regards to the sanctity of life drift away completely. He is, however, overly persistent, able to walk away from any setback and start anew.

Despite his capability for committing great crimes against humanity and evil, Lord Wily in this incarnation showcases some instances of humanity, and to his wretchedness, a reason for why he is the man he is today. In the endings of Mega Man Battle Network 5, Wily approaches his wayward son Regal and tells him that he was not the greatest father he could have been, erasing his memory of the past ten years. He mentions that he would never use the SoulNet (Kokoro Server) like Regal had to take over the minds of others, proving that he is not evil to the point of being supremely totalitarian and throwing away his humanity. As revealed in Mega Man Battle Network 6, he also briefly gave up on evil when raising Baryl, whose parents were participating in an unspecified war, and were likely close friends to him for leaving him in his care. After Baryl's last parent was revealed to have been killed in battle, he relapsed, ensuring he became a villain by the first Mega Man Battle Network. This likely implies that although he was willing to get his revenge on his unbeatable rival, at that point in time, he was willing to just simply direct his jealousy at his adversary; the point that when Baryl's parents died in the world that was essentially directed by Hikari's innovations drove what jealousy and madness that already persisted into sadness and resentment, giving him a weighted, albeit possessive and irrational, reason to start the WWW and eradicate Net Society.

Although Wily didn't appear in Mega Man Network Transmission, the game's main antagonist, known only as the Professor was a colleague of Wily and had vowed to finish what the latter had started via creating and releasing a second version of the Life Virus known as the Life Virus R, though both the Professor and the Life Virus R would eventually be defeated by the combined efforts of Lan, MegaMan, and Zero.EXE.

Although Wily is absent for the entirety of Mega Man Battle Network 4, his son, Dr. Regal attempts to rule the planet with his Nebula organization.

At the end of the Mega Man Battle Network 6, Wily has seemingly given up his former life. He cooperates with the authorities interrogating him in the aftermath of the Cybeast incident, and even sends Lan a letter of thanks for showing him the error of his ways. In the series' epilogue, it's revealed that he also created new Colonel and Iris programs designed to help in peacefully maintaining the Net.

In the Mega Man Battle Network series, Dr. Wily is a robotics expert who was previously the best friend and prime competitor of Dr. Tadashi Hikari's research into computer networks. The two were often in direct conflict, as they battled over the rights to various government funding opportunities and projects. Wily's research, however, was pushed aside in favor of Hikari's vision of computer sciences and the further development of the internet, prompting the scientist to pursue a life of crime through the use of the viruses and NetNavis created from his hated rival's technology, with his ultimate goal being the destruction of Net society.

In the first game, Wily forms the NetCrime syndicate World Three (WWW) to cause havoc in the cyberworld, and unleashes the Life Virus by combining four elemental programs, with the intent of hacking military networks around the world to launch missiles. His plans are foiled by Lan Hikari and MegaMan.EXE, who manage to destroy the virus. Wily is supposedly killed when the original WWW Research Facility explodes with him still in it, but it is later revealed that Wily himself had survived and went into hiding.

In the post-game of Mega Man Battle Network 2, it is revealed that Wily was not only the true mastermind behind the NetMafia Gospel, manipulating an emotionally vulnerable Sean Obihiro to do his bidding in an attempt to clone Bass.EXE, but was also preparing the resurrection of the WWW in the deepest part of the Undernet in a secret base led by temporary leader PlanetMan.EXE and guarded by both NapalmMan.EXE and PharaohMan.EXE.

Despite PlanetMan's deletion, this preparation comes to fruition in Mega Man Battle Network 3 when Wily returns with a new WWW and aided by the real Bass, in an attempt to steal the Tetra Programs to release the proto-internet Alpha. After using Bass to destroy the seal on Alpha, he is absorbed by the proto-beast and subsequently rescued by authorities and arrested

In an exclusive ending scene for Mega Man Battle Network 5: Team Colonel, Dr. Wily approaches his son, Dr. Regal, and tells him that he raised him wrong, and restarts SoulNet to wipe out the last 10 or so years of his life, before he became evil, reforming his wayward son and giving him a second chance at life. The next game is foreshadowed in this scene as it also shows that Wily and Baryl are associated with each other.

In Mega Man Battle Network 6, Wily resurrects WWW for the third time, capturing the Cybeasts Gregar and Falzar, and placing them into giant Copybots (Copyroids). He employs Iris, Colonel's younger sister, as means of controlling them to bring chaos to the real world. Lan, MegaMan, Colonel, and Iris band together to oppose Wily, and the scientist ultimately decides to give up his dream of destroying the Net after seeing Colonel and Iris sacrifice themselves to destroy one of the Cybeasts. Despite being caught in the explosion of his headquarters, Wily survives, and resolves to working alongside Lan's father over the course of the next twenty years. He creates two programs for the Net affectionately called "Colonel" and "Iris", a virus search-and-destroy program and net repair program respectively.

In the anime, Wily does not deviate too far from his video game counterpart. He is still the leader of WWW, but instead of creating the Life Virus as he does in the first game, Wily seeks the "Ultimate NetNavi" (PharaohMan) in order to achieve his goals. He does this through the use of his team of NetNavis, all of whom are from the first game. Though his goals at first appeared to be to destroy DenTech City, he sends his whole group to participate in the N1 Grand Prix. All four of his human operated NetNavis failed at this task as most were defeated almost instantly, but he makes up for it by having two more henchmen working for him, who are later revealed to be solo NetNavis (who can operate without operators), BlasterMan and StoneMan. They succeed in taking down every Navi they fight, but are taken down in the semi-finals by MegaMan and ProtoMan. Wily believes from this that one of the two finalists must be his ultimate NetNavi, and watches the finals from his lair. Although a clear winner, the combatants awaken the true ultimate NetNavi, PharaohMan, who proceeds to cause destruction to mankind deleting MegaMan in the process. Wily then makes it his goal to capture PharaohMan, using an army of BlasterMan and StoneMan clones. Although PharaohMan is weakened in a battle with MegaMan and ProtoMan, then imprisoned by Wily's forces, he retaliates by destroying his base of operations while making it clear that he would rather be deleted than serve a human. During the second season of EXE, Wily emerges from hiding as the force behind Gospel (Grave in the English anime), but is thwarted by Lan and MegaMan.

From there, he fades from the storyline of Axess, but returns in Stream as a character of neutral alignment and walks with a missile-launching recycling cart. It is revealed towards the end of the season that Barrel had requested him to help out people to fight against the Cybernetic God (Duo). That makes him abandon his 'evil' attitude and fulfill his trusted friend's request. It is during Stream that his relationship with Dr. Regal and Yuriko is addressed: they are his adopted children, both of whom washed up on shore near his island research facility after Duo rescued them from a plane crash. Wily's past self plays an important role in the fight as well, as he aids Barrel in traveling to the future to join the other twelve Cross Fusion members. Wily built the 'Time Server' to allow Colonel to travel to the current timeframe using Duo's 'Past Tunnel'.

A parallel version of Wily makes an appearance in Beast. This doppelgänger hailing from Beyondard is nothing more than the remains of Wily's consciousness, stored inside an "Android Brain". He is also responsible for masterminding the war between the Glaga and the Falzer as well as the Beast Factor's creation and of the consequent Big Change. Using the "Synchronizer" powers of the child Navi, Trill, he claims the Super Cyber Beast Glazer as his new body, but is defeated in a confrontation with Netto and Rockman.

After vanishing at the end of Stream, he is revived in Beast+ and appears before Chirol and Captain Kurohige. It is revealed that his home is located under a panel on the floor of Onibi Island (which had been flattered by a volley fired upon by Zoano FlameMan in the 4th episode of Beast because it housed a Copyroid factory of the Falzer's army) . He refused to help them in their quest for revenge and is interrupted when Dark Miyabi walks in carrying a rather large bottle of liquor. When Captain Kurohige constantly begs him for Synchro Chips (he got the idea after seeing how Miyabi was talking with Wily about giving back the Synchro Chip Wily had given him in the Stream season), Wily gets annoyed and fires a missile toward Kurohige from his recycling cart, but misses intentionally to intimidate Kurohige. He later gets buried by a rather large pile of cans that flooded into his room while sharing a drink with Dark Miyabi. He gets pulled out of the pile only to discover that Chirol and Captain Kurohige had used his Reverse Synchro Chips. He then gets rid of the two by having them work at an aquarium, so that they 'learn what the rules of this world are', according to him. Dr. Wily last appears in the series finale being turned into cached data by Cache while drinking with Miyabi. He and the rest of the world are restored when C.F. Rockman destroys Cache. Netto + Rockman 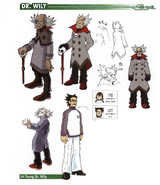 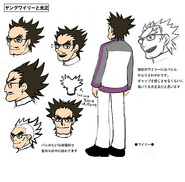