"Am I OK? Of course. Now that you've defeated Sigma, I suppose you're satisfied. Thanks to you, the plan has gone smoothly."
―Lumine, Mega Man X8

Lumine (ルミネ, Rumine) is a new generation Reploid and director of the Jakob Project that X, Zero, and Axl encounter in Mega Man X8, as well as secretly the game's main antagonist.

Lumine appears as a young male Reploid with long lavender hair, most of it styled into a half-moon motif with a fringe covering one half of his face, which features gold eyes, but no eyebrows. His armor is of a slim design, having a white and dark purple color scheme with green hexagonal accents and a large blue jewel on his chest. Lumine also lacks a helmet with the intention of giving him a more human appearance and has a slight feminine figure.[3]

His final form is based on an angel in direct contrast to Sigma's demonic final appearance.[3] Lumine's armor changes and he gains a helmet similar to Zero's, his skin turns pale white, and his hands become claws. He also gains a unique set of wings, with four large compartments, connected to him by thin appendages. Lumine's overall design and abilities, along with his voice, invoke feelings of him being a transcendent or divine being, not limited to any specific form or gender.

Lumine normally maintains the façade of a benevolent, if not somewhat eccentric, leader. He seems talkative and intelligent, able to easily surmise X's concerns as well as provide highly-detailed explanations, but with an oddly emotionally-detached demeanor. He appears very confident in the capabilities of New Generation Reploids such as himself.

However, these qualities belie the fact that he has truly gone mad with ambition. Upon revealing his true intentions to the Maverick Hunters, his tone changes drastically to something more wicked, accompanied by maniacal laughter. He arrogantly derides X, Zero, and Axl for being outdated Reploids who have no place in the future. He claims to have used Sigma, showing he is a patient and cunning strategist, and also crushes Sigma's remains with his foot, showing how little he cares for others. After he is defeated his face is shown stuck in an insane smile, and he indignantly shares his belief that the world will be compelled to approach his goals regardless of his death.

X first met Lumine while investigating an accident at the Jakob Orbital Elevator. After X saw the New Generation Reploids who transformed into Sigma to survive the accident, Lumine explained the situation and told him he had nothing to worry about. He then introduced himself as the lead supervisor of the Jakob Project.

At the end of the opening stage in Noah's Park, Vile appeared, having kidnapped Lumine with a Bindholder. He explained to the Maverick Hunters that he and his fellow Mavericks took control of the Jakob Elevator before departing with Lumine in hand. It became a major goal for the Hunters to rescue Lumine.

Lumine was finally rescued in the Sigma Palace on the Moon. After Sigma's defeat in Easy mode, the game ends as Lumine emerges from the shadows with the significance remaining a mystery, though an ominous silence implies his true nature. After vanquishing Sigma in Normal or Hard mode, Lumine revealed that Sigma had "fulfilled his purpose," and that he and the new generation Reploids had taken advantage of Sigma, not the other way around. Sigma's ambition and leadership helped accelerate the supremacy of the new generation Reploids, but Lumine revealed himself as the true leader of the new "Maverick-at-will" generation of Reploids. Lumine then attacked the Hunters using data from the eight Maverick bosses.

After being beaten the first time, Lumine explained to X, Zero, and Axl that the Copy Chips included in the new generation Reploids were composed of hundreds of old Reploids, including Sigma. He also mentioned that Axl, as a prototype, was incapable of becoming like Sigma, and explained that Sigma turned Maverick of his own free will and not strictly because of the Maverick Virus. He implied that the new generation Reploids had even less restraints in becoming willing Mavericks, and that their hijacking of the Jakob Project was merely evolution running its course. He also taunted X and Zero for being outdated and ridiculed their attempts at stopping the future from marching on. Axl, however, fired a shot at Lumine to shut him up, encouraging X and Zero to ignore him. Lumine transformed and attacked once more, claiming the Hunters were obsolete in the new world.

Lumine expressed disbelief at his final defeat, but claimed it was already too late to stop what had begun and it would take far more to stop the future than just fighting Reploids. Afterwards, a tentacle lashed out from Lumine's body at the approaching Axl, implanting an object in Axl's head crystal. Zero sliced the tentacle off, which disintegrated upon being severed, and X destroyed Lumine's body with a Charge Shot.

Despite his death, Lumine's final words continued to haunt X, and to a lesser degree Zero. X in particular was disturbed by Lumine's claims about awakening and evolution for future Reploids, although Zero reassured X by stating that evolution could never be "becoming Sigma", and that even if Lumine was correct regarding old reploids such as themselves being "destined for the scrap heap" when the evolutionary step occurs, they'd still need to fight, only that time they'd also need to fight against their destinies and not just Mavericks. Zero himself also pondered whether Lumine's claim about Sigma's permanent demise meant there's no longer a reason for him to fight.

Lumine is Latin for "light." The name was most likely chosen as a reference to Lucifer, as per the ever-popular Origen-Tertullian interpretation: named Lucifer ("light-bearer") as one of God's best Archangels in the beginning, afterwards fallen and best known as Satan ever since. This namesake's likelihood is further supported by the subtitle of the game and the name of his final attack, Paradise Lost, which was an epic poem written by John Milton that covered the fall of humanity and the angels, specifically Lucifer.

Lumine is possibly the most powerful antagonist in the Mega Man X series, far above the likes of Sigma and the X-Hunters for fighting Mega Man X, Axl and Zero at the same time and holding his own very well. This makes him arguably one of the the most powerful reploids of the era alongside X and Zero. He is also very intelligent much like Sigma, capable of manipulating the likes of him.

Lumine will levitate throughout the room surrounded by eight colored orbs—the same colors corresponding to the transporters in Gateway, and thus the same powers of the Maverick in said transporter. Among his random taunts, Lumine will eventually summon an energy surge, and one of the small colored orbs will float above him and descend back down into his chest, granting him the Overdrive attack and weakness of the corresponding Maverick. 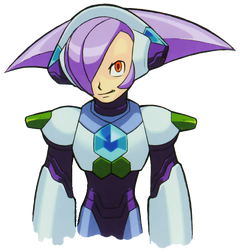 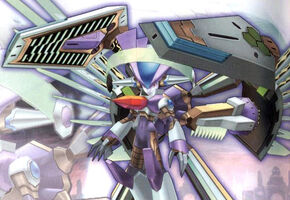 After defeating his first form, Lumine transforms into a seraph-like form, assuming the appearance of a winged Reploid. The confrontation takes place out on a large platform before a golden cloudy backdrop. His attacks will keep players on their guard at all times and many can be difficult to dodge due to their space constraining properties. Also, Lumine does not have any specific weaknesses to exploit in this form, leaving it up to the player to decide what the best weapons are in regards to their play style and choice of characters.

Lumine will begin on the right of the screen (where he positions himself for the majority of the battle) before flying low across the screen; he will make a low pass across the platform after performing many of his attacks. Lumine will keep repeating the same attacks until he has been damaged enough to trigger his Overdrive desperation move.

Announcement: There has been an accident on board the No.4 descending container. All personnel...
X: This is X. I’ve encountered an accident while on patrol of the Orbital Elevator... Dispatch rescue Mechaniloids immediately...
X: Si... Sigma!?
Lumine: To protect ourselves from damage during the accident... We had to copy a sturdy Sigma Body. We new generation Reploids enjoy complete and total immunity to all viruses... So even copying something as dangerous as Sigma provides no risk.
X: Who are you?


Lumine: I’m Lumine. I’m the director in charge of the Elevator, and of the Jakob Project.

X: Oh, Lumine. Are you OK?
Lumine: Am I OK? Of course. Now that you've defeated Sigma, I suppose you're satisfied. Thanks to you, the plan has gone smoothly.
Axl: But Lumine, weren't you just used by Sigma?
Lumine: Used? I don't think so. You see, he merely helped my plan along...


Lumine: The new generation Reploids have been awakened, and the new world is at hand!

X: Lumine! What are you doing? Don't tell me you've gone Maverick, too...
Lumine: Maverick? You don't really think that's the case, do you? That's why you can't finish me off, right? You don't have it in you...
X: .........!
Lumine: The copy chips we new generation Reploids possess... They were derived from data from hundreds of old model Reploids. That means, of course, that Sigma was also included in the mix. Do you understand what I'm getting at here?
Axl: Copy chip? Sigma? Does that mean that I'll go nuts like he did?
Lumine: Sorry, but prototypes like you don't have the specs to cause something like that. Besides... Was Sigma really crazy?
Axl: .........?


Lumine: He rebelled against your world. But he had his reasons... The rest of us new Reploids could turn like that at any moment...

Lumine: This decision to wage battle against the old world was made consciously. In other words... We possess the power to go Maverick at will! X... Do you really have what it takes to stop us? You're merely tools of the humans. Tools of the old world... You think you can stand up to those of us who have evolved this far? The world is changing! Therefore it's only natural that evolution take its course. Now, line up to be exterminated!
Axl: Don't let him get to you, X. He's the enemy.
Lumine: Enemy. Ally... This issue isn't so black and white. Reploids, along with humanity, have irrevocably changed. The nature of their existence has also changed. You are not needed in our new world!


Zero: You can babble all you want, but we're not going to let you get away with this!

Lumine: Unbelievable... You may have defeated me, but it's too late to stop what's already begun...
Axl: I'll take on plenty more like you, if that's what it takes.
Lumine: Ha ha ha. You really don't have a grasp of the situation, do you? Oh well... You'll find out soon enough... 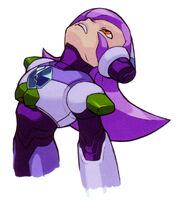 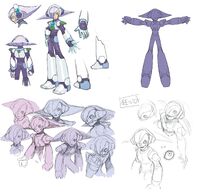 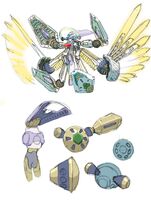 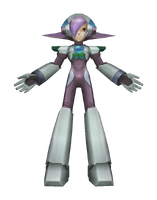 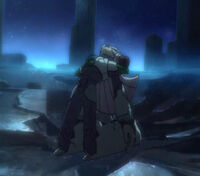 Lumine after his defeat. 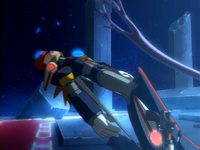 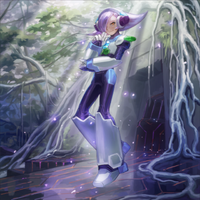 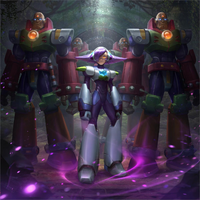 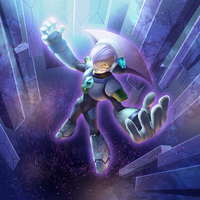 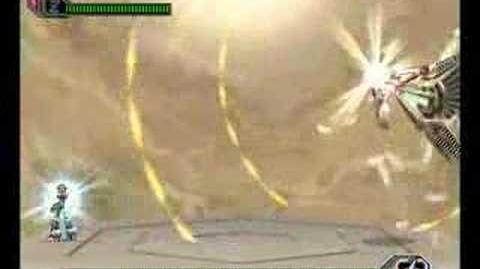