MMKB
Register
Don't have an account?
Sign In
Advertisement
in: Robot Masters, Robot Masters without a Netnavi Counterpart, Rockman Strategy bosses,
and 3 more

Temple of the Moon 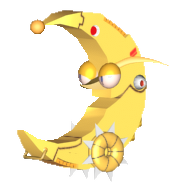 Luna (月之神, Luna lit. "Moon God") is a boss from Rockman Strategy. Luna, alongside Apollo, are the leaders of the alien robots who came to Earth seeking for the energy of plants to bring back to their planet. When the alien group arrive on Earth, the first person they meet is Dr. Wily. Wily convinces the aliens to help him conquer the world by saying that's the only way to save their home. By using their alien technology, they start to drain energy from plants around the world, making them rapidly grow and wither. Wily uses this to blackmail the world, saying that if his demands are not met, all plants, and in the process, all living beings would die.

Dr. Right sends Rockman, Rightot, Eddie and Beat to investigate the situation and stop Dr. Wily. After discovering the involvement of the aliens, Rockman tries to talk with them. The aliens wish no harm, and when they ask if there is a better solution to their problem, Wily takes control over Apollo and Luna, forcing them to fight against the heroes. In battle, Luna is accompanied by Sword Man and Skull Man. Luna's element is Wind.

After their defeat, they all go after Dr. Wily, putting an end to his scheme, and the two aliens are sent to Dr. Right's laboratory. Months later, Dr. Right finished repairing them. They learn several cultivation methods and are given seeds, allowing them to improve the floral life from their planet.

Luna with no background