Luna Platz, known as Luna Shirogane (白金ルナ, Shirogane Runa) in Japan, is a main character in the Mega Man Star Force series. After encountering Mega Man, she apparently develops affections for him, yet visibly states that she does not care for Geo. Still, it is obvious that she has a crush on Geo, and that she sees his partner, Sonia Strumm, as one of her rivals.

Luna is a very perky and bossy person in both the games and the anime. She is also a capable leader (to some degree) as she was able to lead Zack Temple and Bud Bison without much difficulty. Luna is, in most cases, a perfectionist, partly due to having parents with incredibly high standards. She is also a very persistent person, trying to convince Geo to come back to school early and fail several times in the first game. Eventually Geo made the decision alone to return due to a suggestion from Sonia. Luna has a fondness of cute things like her rabbit-like Wizard named Vogue.

Luna is first shown as the 5th Grade class president, with her 'lackies', Bud and Zack. She runs into Geo, and tries to get him back to school. After many failed attempts, which include following Geo wherever he goes to try and get him to warm up to other people, eventually, Geo returns on his own. Luna, however, ends up putting herself in the middle of the many incidents involving Mega Man and FM-ians. Her parents believe that her friends are dragging down her potential, and decide to transfer her to another school. After confronting her parents in front of Geo and Sonia, she runs off and encounters Ophiuca. Ophiuca offers Luna the ability to get back at her parents and they then Wave Change to become Queen Ophiuca. After the incident is resolved, Luna hugs Mega Man as the Wave World deteriorates, giving him no time to escape, causing him to transform back into Geo. Luna is then the second person after Sonia to know Mega Man's secret identity.

She plays a less prominent role, being rivals with Sonia Strumm for Geo's affection. It is also more obvious that she has feelings for Geo, for instance, if the player looks in the secret section of her personal page after forming a BrotherBand with her, it will say that there is a boy she likes almost as much as she likes Mega Man, which the player will assume to be Geo.

Early in the game, she is kidnapped by Hyde, known in Wave form as Dark Phantom, and taken to the top of the IFL tower. Geo later saves her. Later in the game, she is kidnapped again to lure Geo out and Hyde revealed that some of Ophiuca's data is still inside her. He then unlocks her heart to force her to become Queen Ophiuca. After Geo defeated her, he was almost consumed by the power of the OOPArt. Luna told him he can trust her to help him which allowed him to control the OOPArt through Link Power, the power of trusting others.

Further developing the relationship between her and Geo, if the player chose to save Luna's item instead of the others, a scene will play out between the two, where she holds his hand and they both blush. When Geo asked why she's holding his hand, she says that it's because she knows that he was thinking about how scary the ocean is at night and thinking about falling in. She then talks about how she can't fight alongside Geo, like Sonia does, but he then states that Luna is already fighting along with him, and continues to mention the times she was always there giving him support, when she made him go to school when he was sad and locked in his house, and when she encourage him to fight when he was thinking of giving up. On the other hand, Geo states that if it wasn't for her, he probably would have given up being Mega Man.

Luna is shown with a Wizard named Vogue, therefore she now has a Hunter VG. However, she does not use it to Wave Change, as Vogue is not a battle Wizard and clearly states that she finds combat terrifying. After Jack and Queen Tia reveal their true identities, she was destroyed by Dread Joker and separated into six pieces of EM waves. With the help of Ace and Acid, Geo is able to find Luna's data and bring her back to life with Dr. Goodall's machine. She was completely unaware of being deleted until later in the game, where she states that is thanks to Geo's and everyone else's effort that she is alive and owes Dr. Goodall, implying that she is now aware of the events that happened.

In the anime, Luna became infatuated with Mega Man after he saved her life, though she was unaware of his secret identity. Her infatuation becomes a fangirl-like obsession, even creating schemes to try to see her "hero", such as ordering a lot of packages to herself in hopes Mega Man would deliver them (prior to that, Geo had taken it upon himself to deliver several wrong address packages after a virus attack in the mail sorting facility, with one of his stops being Luna's house) these end up failing.

It was because of this weakness that she is targeted by Ophiuca during one of Sonia's concerts, taking advantage of Luna's desire to see her hero and her jealousy over Harp Note, who she believes may be romantically involved with Mega Man. However, Ophiuca could not take full control because of Luna's love for Mega Man, such as when she tries to hug him by constricting him. This, in turn, gave Mega Man and Harp Note an advantage, since Ophiuca and Luna kept switching between each other, thereby preventing Ophiuca from using her full power, allowing them to defeat Queen Ophiuca.

After witnessing Mega Man change back into Geo as the result of one of Andromeda's attacks, she goes into self-denial of seeing it even though Zack and Bud were present at the time. Luna refuses to accept Geo and Mega Man as a single being despite Bud and Zack's words and meeting Omega-Xis. However, in the last episode of Tribe, she calls him Geo whilst in wave change form. Although in the games she seems to have a hastily growing infatuation for Geo as well as Mega Man; this was toned down in the anime.

Luna appeared in the Shooting Star Rockman 3 manga, with a role similar to the game. 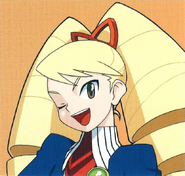 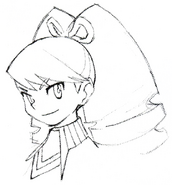 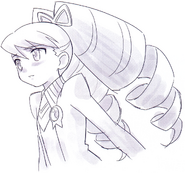 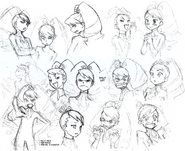 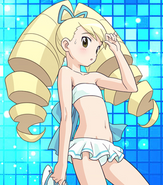 Design reference for the anime. 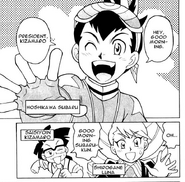 Luna, Kizamaro and Subaru in Shooting Star Rockman 3 (manga).
Add a photo to this gallery

Retrieved from "https://megaman.fandom.com/wiki/Luna_Platz?oldid=323925"
Community content is available under CC-BY-SA unless otherwise noted.