Lunch Rush (昼食ラッシュ, Lunch Rush), renamed as Servbot Takeout in the English version of Marvel vs. Capcom 3: Fate of Two Worlds, is one of Tron Bonne's and Servbot's most powerful attacks in the crossovers they appeared.

In Namco × Capcom and the Marvel vs. Capcom fighting games, Tron attacks an opponent with the Beacon Bomb, and 40 Servbots appear to take food from the Servbot accompanying her, running over the opponent in line while carrying their plates. 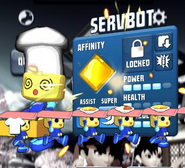 Puzzle Fighter
Add a photo to this gallery
Retrieved from "https://megaman.fandom.com/wiki/Lunch_Rush?oldid=293984"
Community content is available under CC-BY-SA unless otherwise noted.