Lyra, known as Harp (ハープ, Harp) in Japan, is an EM Being from Planet FM. She has the power to EM Wave Change with Sonia Strumm to become Harp Note. Lyra is not only Sonia's partner in combat, but also helps Sonia write songs, and sometimes plays the role of a parental figure for Sonia.

Lyra tends to make flirtatious comments towards Omega-Xis after they become allies, which generally annoys Omega-Xis. Whether this is out of a genuine attraction or just another way to bother him is debatable.

Lyra is first encountered after Geo Stelar defeats Cygnus Wing. She convinces Sonia Strumm to let her into her body, after Sonia's manager tries to force her to sing. After Mega Man defeats Harp Note, their merged form, Sonia forms a Brother Band with Geo and Lyra abandons the FM-ians and stays with Sonia. She is shown to be arguing with Omega-Xis after he obtains the Andromeda Key, later taken from him by Taurus Fire.

Her last appearance in this game is one where she is seen on top of Geo's house, talking with Omega-Xis. With Andromeda defeated, she decides to stick around on Earth.

Lyra continues as Sonia's partner, and stays with her even while the two appear to be teamed with Dr. Vega, helping Sonia with the facade. The two later return to help Geo and Omega-Xis.

Lyra is given a much lesser role in the plot of the game. Lyra and Sonia are still partners, both in fighting and in music, but are not seen as often nor play as large of a role as they used to. Sonia and Lyra help defend the National WAZA Headquarters during the Dealer's attack, aiding them in holding off until Geo and Omega-Xis arrive.

The events that occur with Lyra in the anime are somewhat different than in the games. She is responsible for causing an annoying noise that forces Omega-Xis to exit out of Geo's Transer, to challenge him to a EM wave battle for the Andromeda Key. When she was defeated, she quicly retreats and performs with Sonia Sky (when she was sleeping) an EM Wave Change to become Lyra Note. When she (in this form) was about to defeat Omega-Xis, she quickly withdrew from the battle when she noticed Geo's presence. The next day, Lyra again took possession of Sonia's sleeping body and as Lyra Note, played a lullaby that put all who heard it to sleep. This time she was challenged by Omega-Xis, now in his Star Force Mega Man form to a rematch. After a battle, Lyra Note was easily defeated by the Gatling Gun Battle Card.

Later, Sonia scolds Lyra for causing trouble for both herself and all the people. Therefore, Lyra leaves the FM-ian team to stop being a nuisance to Sonia. Since then, Sonia and Lyra decide to fight on the side of Geo and Omega-Xis. 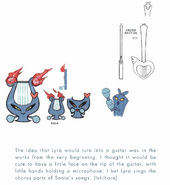 Lyra in the anime