M-422A is a stationary underwater enemy from Mega Man 4 and Mega Man III. When Mega Man approaches this jellyfish-like survey robot, it will move up and down in an attempt to harm him if he passes by them. The M-422A is invincible to Mega Man's attacks. It is found only in Dive Man's stage. 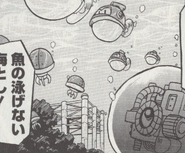