MagicMan.EXE (マジックマン, Majikkuman) is the NetNavi of Yahoot and former antagonist in the MegaMan NT Warrior anime series. A member of the WWW with his fellow NetNavis TorchMan, ElecMan, and WackoMan, MagicMan helped cause chaos and confusion in society until the downfall of the criminal organization. Since then, MagicMan has remained loyal and faithful to Yahoot as the two became more friendly to their former enemies Lan Hikari and MegaMan.

In the English dub, MagicMan talks in rhymes, while in the Japanese dub, he speaks in a very polite manner, much similar to Glyde.

MagicMan hypnotizes everyone watching Yahoot's yoga program (basically everyone except Lan Hikari and Maylu Sakurai) into thinking that they are animals. Lan eventually finds Yahoot and MagicMan at the TV station. MegaMan cannot stand up to his attacks, and he unleashes his most powerful attack, the Magic Fire. ProtoMan reflects this, and he is defeated. He later enters into the N1 Grand Prix, where he easily counters all of MegaMan's attacks only to be narrowly defeated by an incomplete Program Advance launched by MegaMan. MagicMan, along with Yahoot and the other WWW members make a return appearance in MegaMan NT Warrior Axess and Rockman.EXE Stream.

He appears in episode 48.

He appears in episode 41. 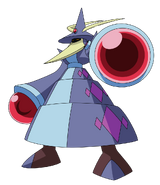