Magic Man (マジックマン, Majikkuman) is an illusionist themed Robot Master, and a member of King's army. He was formerly a member of a circus, but he enlisted in King's army in order to show off his talents. His Special Weapon, the Magic Card, can steal energy from enemies to restore his health. His stage is one of the two stages unlocked by beating Ground Man.

Magic Man is a natural showman who puts incredible effort into practicing his magic tricks, but because of his egotism and a bad habit of performing tricks at inopportune times, he is not regarded well by his comrades. He is something of an attention seeker -- he enjoys amazing people and especially receiving applause for his performances but tends to be very secretive about the trickery involved to make them work. He has also recently taken up fortune-telling as a hobby.

Magic Man will start off the battle dashing away from Mega Man or Bass, and for the majority of the battle he will dash across the room. After dashing, he will either throw out a Magic Card at them that quickly returns to him, which can steal health from the player so he can recover a little bit of his own health, or toss a magic orb that spawn Romper Gs when shot at. Magic Man can also jump into the air and toss a ball with stars on it directly at Mega Man/Bass, which spawns white birds once they hit the ground. These birds can be destroyed easily with a charged Mega Buster shot if playing as Mega Man. Magic Man is weak to the Tengu Blade; if he is hit by this weapon, he will be (nearly) cut in half, momentarily stunning him. The projectile sent out after using Tengu Blade cannot stun Magic Man, however. If the player runs out of weapon energy for the Tengu Blade, the Wave Burner is also a good weapon to use against Magic Man.

Amount of damage in units that Magic Man receives from each Special Weapon in Mega Man & Bass.

Magic Man and King's other robots appear in the Rockman 8 manga, but with the exception of Pirate Man, they leave shortly after their appearance.

Magic Man appears as part of the Robot Master army serving Dr. Wily and Dr. Eggman during the Worlds Collide crossover. He is among the Robot Masters who suffer the ill effects of Silver the Hedgehog's psychic powers, though their assailant soon found himself immobilized by Flash Man. 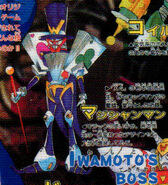 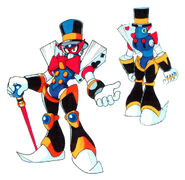 Retrieved from "https://megaman.fandom.com/wiki/Magic_Man?oldid=338724"
Community content is available under CC-BY-SA unless otherwise noted.