Magma Dragoon, known as Magmard Dragoon (マグマード・ドラグーン, Magmard Dragoon) in Japan, is a dragon-based Reploid from Mega Man X4. Once the leader of the 14th Special Unit, he betrayed the Maverick Hunters, becoming a Maverick himself, all for a chance to duel with X and Zero.

Under the promise of obtaining what he desired most, Magma Dragoon followed Sigma's orders and sabotaged the power generator of the floating colony Sky Lagoon, causing it to crash onto the city below it. This not only killed probably thousands of innocent civilians, but resulted in Repliforce (who were on patrol in the area for helping at the time) being blamed for the incident, pushing General into starting a bid for Reploid independence which in turn was viewed as a coup d'état by the Maverick Hunters. After the Sky Lagoon incident he hid in a volcano to goad X and Zero into fighting him. When defeated, he apologizes for his actions, stating how he had always dreamed of fighting X/Zero, and that "a mysterious man" offered him that chance, which he simply could not refuse.

X can defeat him easily with Double Cyclone. Zero on the other hand will have a much harder time, and will have to get creative in order to damage him with the Raijingeki. When encountering him, if the player can manage to bring the Ride Armor with close to full health, it may be possible to defeat Magma Dragoon before the Ride Armor is destroyed. Otherwise, probably the safest (but still dangerous) strategy is to cling to the right wall as much as possible only coming down to attack or to possibly avoid a Shoryuken or the fireballs he throws in to the lava under the wall to make the lava erupt (which will result in death if touched). If on the ground the player will have to either dash or jump over his Hadoukens. When he hunches over and opens his mouth, he's preparing to unleash a long stream of fire; this can be avoided by jumping over him, by climbing up the wall, or if playing as X and have gained the Fourth Armor Foot Parts from Web Spider's stage, hover. Dragoon will also perform a flaming downward kick, which is easily avoided by dashing under him. When his health is down to half, Dragoon will rear back and roar, causing large fire balls to rain down from the ceiling; afterwards he will continue on with his normal attack patterns.

Most bosses show the ability that the player will gain during the battle. For X, his Rising Fire is a fusion between Dragoon's Hadoken and Shoryuken. Zero's Ryuenjin is very similar to the Shoryuken as well, as he nearly does an uppercut action with his Z-Saber.

Stage description: Dragoon of the 14th unit is a traitor. Locate and bring him back to Hunter H.Q..

Magma Dragoon has great speed and strength, his fighting style being very similar to Ryu, Ken, Sagat, Akuma, and to a lesser extent Adon and Dhalsim from the Street Fighter series. He has most of his moves in common with Akuma.

X: You're Dragoon from the 14th unit!

X: What?! Then the Sky Lagoon will... come crashing into the ground!

Dragoon: It's too late, X! It's time I made my escape. I suggest you do the same... don't do anything reckless on the way out, okay?

X: The city below will become a sea of flames. Many people will perish... I have no choice but to escape from here and head to the city below!

Dragon: Heh... You'll have to defeat me first.

X: No! Those were innocent people! You're not Dragoon! Just a Maverick!

Dragoon: You got that right! Power up X! It's time you showed me what you can do!

Dragoon: ...told me to work for Repliforce. To goad you into fighting...

X: You did it just so you could fight me?

Dragoon: This doesn't look good, Zero! That Maverick took out the power!

Zero: What! Then the Sky Lagoon will... come crashing into the ground!

Zero: We have to do something!

Dragoon: It's too late. I must escape now. You'd best do the same, Zero...

Zero: Damn! If the Sky Lagoon falls... it will be disastrous! There's no time... I'm going down!

Zero: Why did you betray us?!

Dragoon: I have no answer for you my friend.

Magma Dragoon appeared in the manga.

Magma Dragoon is among the many Mavericks cloned by Sigma-1 to serve in his multiverse-conquering army in Worlds Unite. He went to the world of Street Fighter to set an Unity Engine in Metro City, but is defeated by the new Team Sticks. 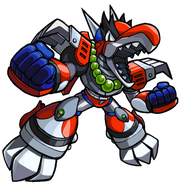 Magma Dragoon in the Rockman X4 manga.
Add a photo to this gallery

Retrieved from "https://megaman.fandom.com/wiki/Magma_Dragoon?oldid=264989"
Community content is available under CC-BY-SA unless otherwise noted.