Magma Man (マグママン, Maguma Man) is a Robot Master from Mega Man 9 modeled after an incinerator that Dr. Light created to oversee safety operations and manage a geothermal power plant. He is able to withstand incredibly high temperatures and loves to visit hot spas.

Magma Man is one of the eight Robot Masters whose period of use had expired and was scheduled to be scrapped. Dr. Wily pretended to be concerned by offering to repair them, reprogramming the tricked robots to help him conquer the world.

Magma Man moves by jumping while shooting his Magma Bazooka. As long as the flames on his head are ignited, he will fire off charged shots.

His weakness is the Tornado Blow, which not only damages him, but also blows out the flames on his head. Afterwards, Magma Man can only fire normal shots until he recharges.

In the end credits picture, he is seen heating up a bathing oil drum that Dr. Light is relaxing in, having been rebuilt after the events of the game.

Displays the amount of damage in units that Magma Man will receive from each Special Weapon in Mega Man 9.

On Superhero Mode, Classical Cannons appear in the stage. The number of Popo Heli's, Fire Totems and Jump Rollers drastically increase in numbers.

Magma Man was also featured in the Worlds Collide crossover event between the Archie Mega Man and Archie Sonic the Hedgehog and Sonic Universe comic series. He appeared as part of a large army of Robot Masters assembled by Dr. Wily and Dr. Eggman to defend their flying fortress, the Wily Egg. He joined several other fire-equipped Robot Masters like Heat Man and Pharaoh Man in attacking Blaze the Cat, but they were overcome when she turned the fire they had generated against them.

Magma Man appears in the short story "For Whose Sake?" included in the booklet of Rockman 9 Arrange Soundtrack and in Rockman Maniax. 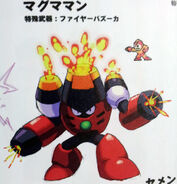 Magma Man in the ending credits of Mega Man 9.