Magna Centipede, known in Japan as Magne Hyakulegger (マグネ・ヒャクレッガー, Magune Hyakureggā), is a ninja centipede-like Reploid in the Mega Man X series. He is a former Maverick Hunter of the Special 0 Unit that was captured by Sigma's forces during Sigma’s first uprising and brainwashed. Now a Maverick, Magna Centipede became a cold, emotionless killer that would do anything to complete a mission given to him, even destroy his former comrades without hesitation.

Magna Centipede is one of the eight bosses. He snuck into a computer center where he began transmitting the Maverick Virus around the world. X went to the area to stop the virus and destroyed Magna Centipede, obtaining his Magnet Mine. He is later fought again in the fourth X-Hunter Stage.

Magna Centipede appears as a reproduced boss data inside the Hunter Base's Mother Computer. He is one of the four bosses in Hard Mode and one of the eight bosses in Extreme Mode. He fights like his original version, and X obtains the Magnet Mine after deleting him.

In Mega Man X2 and the Game Boy games, Magna Centipede poses and attacks like a ninja, moving fast and "teleporting" around the room. He will also cling to the ceiling, throw shurikens or attract X magnetically to his tail in order to infect him with the Maverick Virus. He also attacks with his main weapon, Magnet Mine. At times, he will jump across the room. If the Silk Shot is used against him, his tail will break off, rendering him unable to use the Magnet Mine or infect X with the Maverick Virus. He is also vulnerable to Strike Chain.

Magna Centipede disguises himself as female human model Reploid named Silky (シルキー, Silky) in an attempt to get close to X, revealing himself only after dealing him a mortal blow and infecting him with the virus in his tail. Despite being at a disadvantage, X manages to defeat Magna Centipede by enduring his attacks.

Magna Centipede was one of the many Mavericks revived by Sigma during the Worlds Unite crossover. After an initial assault on the good guys, he is sent to the world of Alex Kidd to plant an Unity Engine when he runs afoul of Alex and Stella. They challenge him to a game of rock-paper-scissors over the right to activate the engine, but Centipede's multiple limbs give him an unfair advantage. In response for his cheating, Alex and Stella smash him to pieces. 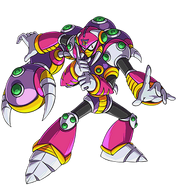 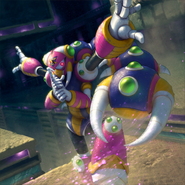 Retrieved from "https://megaman.fandom.com/wiki/Magna_Centipede?oldid=314977"
Community content is available under CC-BY-SA unless otherwise noted.