Magnes, known as Magnets (マグネッツ, Magnets) in Japan, is a Wizard who helps watch over the electrical appliances in Echo Ridge Elementary's science lab along with his brother, Coil.

He is a very cheerful and nice Wizard who loves his job and has a strong can-do attitude. He also has the tendency to say "yup" a lot.

Queen Tia and Jack corrupt him with a Spade Noise Card, turning him into Spade Magnes and causing a rocket from the school science club to malfunction. With Coil's assistance, Mega Man defeats Magnes and he returns to normal. Afterwards, Magnes becomes emotional and apologizes for the trouble he caused, and eventually realizes his dream of guiding a rocket into space, as he helps Geo get close to Meteor G, due to his rocket being immune to high levels of noise because of his previous transformation into Spade Magnes.

Magnes is then forced to pulse out of the rocket, back to earth as the rocket came apart from the high levels of of Noise from Meteor G. 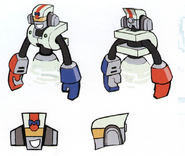 Concept art of Magnes.
Add a photo to this gallery

Retrieved from "https://megaman.fandom.com/wiki/Magnes?oldid=293035"
Community content is available under CC-BY-SA unless otherwise noted.