"Fire an adjustable beam that can be used as a platform!"
—Mega Man Powered Up description

Magnet Beam (マグネットビーム, Magunetto Bīmu) is a transport item from the Mega Man series that can temporarily create beams that can be used as platforms.

The Magnet Beam is found in Elec Man's stage, and can be obtained by using the Super Arm or the Thunder Beam to remove the blocks in the way. The longer the fire button is held down after using it, the longer the platform it creates becomes, at no additional weapon energy cost. It makes navigating through stages considerably easier, as it helps to avoid Appearing Blocks, spikes, pitfalls, Foot Holders, and Drop Lifts. The item is also necessary to clear a room in the first stage of Dr. Wily's factory. Of note is that, when dropping down from the Magnet Beam (unless jumping), Mega Man will fall faster than normal.

Magnet Beam is one of the items that can be selected in the Wily Tower mode.

Magnet Beam appears in the Old Style mode, which reproduces the gameplay from the original Mega Man game. Just as in the the former, if the player falls off of a beam, they will fall extremely fast.

The Magnet Beam also appears in Archie's Mega Man comic and the Rockman manga. In both media the Magnet Beam was created by Dr. Light to assist Mega Man.

In the Archie Comics adaptation, Mega Man declares it to be the "coolest weapon ever". It was created by Dr. Light after he had Mega Man restrained due to the latter becoming reckless from letting the Special Weapons data get to his head. He also assured Mega Man that the weapon couldn't blow things up even if Mega Man tried it. Mega Man later used it to bypass an otherwise unavoidable spiked trap in Wily's factory, and eventually to temporarily retreat from Copy Robot and think of a strategy to defeat it, although the six Robot Masters made this unnecessary by blowing up Copy Robot, using a loophole to get out of destroying Mega Man while at the same time technically achieving their stated goal of doing so. 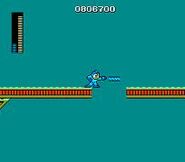 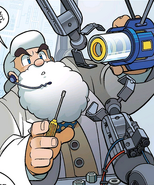 Dr. Light working on the Magnet Beam in Mega Man #3. 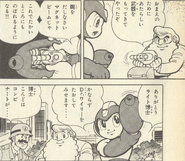