Magnet Man (マグネットマン, Magunettoman) is a Robot Master created by Dr. Light and Dr. Wily to generate powerful magnetic forces, making his debut in Mega Man 3. In that game, Dr. Wily reprograms and uses him as a combat robot. Magnet Man's Special Weapon is the Magnet Missile, horseshoe-shaped missiles that can home in on nearby enemies, fired from a launcher on his right wrist. He is also capable of generating a powerful magnetic field to draw his metallic opponents closer to him with his magnetic powers, so he can attack them from close range, and is thus classed as a bit of a rough-and-tumble type of character.

A good leader and tactician in combat, Magnet Man is skilled in the field of management, but he has quite an abrasive personality, and is often considered by his colleagues to have no sense of direction. Though he is a robot, he takes care of his health, enjoying finger-pressure therapy and massages. He has to be kept away from floppy disks and any other nearby magnetic storage mediums due to accidentally corrupting them when he is near them. He has been observed utilizing his powers to magnetically stick himself to ceilings when sleeping.

Magnet Man is one of the eight bosses. He jumps from side to side, which Mega Man can easily avoid by sliding. The player can attack him while he is jumping, but they also have to make sure to avoid him when he does a second jump. After that, he has two attacks: first, he may fire three Magnet Missiles, that travel from the ceiling to the floor in an attempt to land on Mega Man. The player has to avoid it by standing close to Magnet Man and by moving to the opposite side of the room by sliding, then shooting at him when he lands. He may also stand still and start pulling Mega Man in with magnetic waves. The player has to avoid it by sliding to the opposite side of the room. Magnet Man is invincible to any and all Special Weapons and the Mega Buster while doing so.

Magnet Man's weaknesses are Spark Shock and Shadow Blade, both weapons capable of destroying him in four hits. It is recommended to combine all the strategies above with Spark Shock, as it can hit him easier than the Shadow Blade. Magnet Man is also weak to his own weapon, like all other Robot Masters in Mega Man 3, which can defeat him in seven hits, but this is only possible in the rematch battle against him in the Wily Castle.

Magnet Man is one of the four bosses in the Wily Castle. His actions are the same from Mega Man 3. He is weak to Needle Cannon.

Magnet Man is one of the six bosses from the "Mega Man 3~6" course. He uses the same attacks from Mega Man 3, sometimes varying how he uses them, being able to warp between each side of the screen while pulling the player's character.

Magnet Man is one of the robots revived by Ra Moon in the Lanfront Ruins, and appears as the first boss from Episode 3. In battle, he moves around while attacking with Magnet Missile, and he has a barrier around him, which Mega Man must destroy to damage him. After losing half of his health, he will also launch spheres made of scrap and spiked objects. If the player is defeated by him, Bomb Man will appear to save Mega Man, giving him the chance to try again.

Later, Magnet Man and Wily's other robots are revived again near the end of the episode, and they are apparently destroyed alongside Ra Moon's temple.

Translation: A robot that manipulates powerful magnetic force. He attracts enemies and attacks them with search-type missiles. He has a rough personality, which is probably why he hangs on ceilings in his sleep (?). His special weapon is Magnet Missile.

*The enemies in Magnet Man's stage in Mega Man II are the same, except that Proto Man doesn't appear.

Amount of damage in units that Magnet Man receives from each Special Weapon in Mega Man 3.

Magnet Man appeared in the Mega-Pinocchio episode from the Mega Man animated series. His design is similar to the games. Mega Man is controlled by Wily in this episode, but when he returns to normal, he keeps up the facade of being evil long enough to trick Magnet Man into high-fiving him. Mega Man steals Magnet Man's power while touching him and uses it to slam Magnet Man into a nearby wall, knocking him out with the impact.

Magnet Man is never shown using his Magnet Missile - instead, the launchers on his hands are projectors for his magnetic fields. He is shown using it once, before being told by Crash Man to "step aside" so he can finish the job.

Officially, Magnet Man had been assigned to manage the scrap iron that would inevitably pile up when excavating foreign planets, but he was actually created by Dr. Wily to be a seasoned combat robot who uses his ability to manipulate magnetic fields to damage his opponents. His main weapon, the Magnet Missile launcher, fires homing missiles that are capable of sensing their target's location within a certain range. Magnet Man is said to rely completely on magnetism as far as fighting is concerned, which has resulted in a rather simplistic outlook and personality.

Magnet Man appears in the story "Metal Heart" trying to recover the Yellow Devil MK-II. He also has a short appearance in the story The Strongest Enemy to Date, where Dr. Wily's robots have a party in his hideout.

In Mega Man Gigamix, Magnet Man appears in "Asteroid Blues" as one of the robots that assist Wily to steal Gamma, in "White Nightmare" attempting to stop the alien robot, and in "Toward a Bright Tomorrow" giving support in the battle against the Stardroids.

Magnet Man, alongside Needle Man, Hard Man, Top Man, and several minions, attack Mega Man inside a room from the Wily Castle. Mega Man has a tough battle against the large number of enemies, but manages to defeat them one by one. In the manga Magnet Man fires Magnet Missiles from his head instead of his arm.

Magnet Man appears in some of the shorts. In one of them he tries to pull Mega Man, but as the hero holds on a structure, he increases his magnetic force and ends up pulling several metallic objects, such as a car and a freezer. 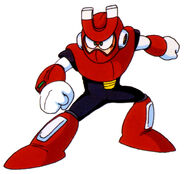 Front, side, and rear view of Magnet Man. 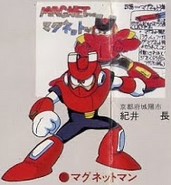 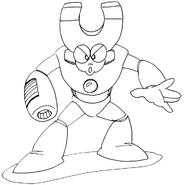 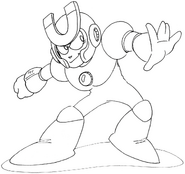 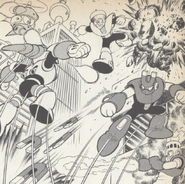 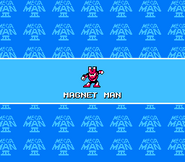 Magnet Man with an arm cannon in Super Adventure Rockman.