Magnet Missile (マグネットミサイル, Magunetto Misairu) is Magnet Man's Special Weapon, a magnet-shaped missile that tracks its target with a magnetic force. In most games, Magnet Man first jumps in the air, then fires three Magnet Missiles that travel horizontally until it is parallel to the target, and then travels vertically toward the opponent.

When equipped by Mega Man, these Magnet Missiles function the same as that from Magnet Man, however he can only have two Magnet Missiles on the screen at a time. If a Magnet Missile hits an enemy during its horizontal track, it will just explode without vertically tracking anything.

Mega Man obtains Magnet Missile after defeating Magnet Man. The missile only moves vertically if the target can be harmed (even if it is immune to Magnet Missiles), skipping enemies that cannot be harmed such as Mets under their helmets and Hammer Joes with closed eyes.

One Magnet Missile uses two Weapon Energy units. With a full weapon energy gauge, it can be used fourteen times. It is the weakness of Hard Man and Doc Robot (Metal Man and Air Man), and also does a good amount of damage against Magnet Man during the rematch in the Wily Castle.

The Magnet Missile is the same from Mega Man 3, except that now it also changes trajectory to follow indestructible objects that can harm Mega Man, like Mets under their helmets, and also energy projectiles. This greatly reduces its efficiency as the Magnet Missiles may change directions during an enemy attack and miss the target. Besides the Mega Man 3 remake, Magnet Missile can also be used in the Wily Tower mode. The "Wily Machine" from the Wily Tower is immune to it.

Magnet Missile acts like Mega Man 3, except that it moves vertically even when the targets are invincible, like Mets under their helmet and Hammer Joes with closed eyes. It doesn't follow projectiles like Mega Man: The Wily Wars. One Magnet Missile uses two Weapon Energy units. With a full weapon energy gauge, it can be used nine times. Magnet Missile is Hard Man's weakness, and the Wily Machine II is immune to it.

Magnet Missile is obtained by defeating Magnet Man in the Mega Man 3~6 course. It acts like Mega Man 3 and is most effective against Gemini Man. With a full weapon energy gauge, it can be used fourteen times. When used by Magnet Man, he can also release four at a time, which stay in the air for a while before moving down.

Magnet Missile is the first weapon obtained by Mega Man in episode 3. It is Hard Man's weakness.

Main article: Magnetism
The Magnet Missile is absent in the cartoon, with Magnet Man only using his magnetic power. In the episode Mega-Pinocchio from the animated series, Mega Man got Magnet Man's power by pretending to be evil long enough to get close to him, before tricking him into giving him a high five to steal his power. After he obtained it, Mega Man used his magnetic power to slam Magnet Man into a wall, before pulling Dr. Wily's mind control helmet to him, taking it to use himself.

As Magnet Man's weapon, Magnet Missile was created with him by Ra Moon in issue 14 based on designs created by Drs. Wily and Light. He is seen using it for the first time in issue 32 to take down Bomb Man.

Mega Man obtained Magnet Missile in issue 43 and used it in issue 44 to defeat Hard Man. Also in Mega Man #44, in a flashback from Spark Man, Magnet Man says that Magnet Missiles can home-in on Ceratanium, which is only paramagnetic.

Magnet Missile is a specialized homing missile that can sense the target's location within a certain range. The missiles run a magnetic current, and alter course according to geomagnetic and Fleming's left-hand rules.

In the manga, Magnet Missile is only used by Magnet Man. When Magnet Man, Needle Man, Hard Man, and Gemini Man are stuck in a small space in the story Metal Heart and attacked by guard robots, Magnet Man uses Magnet Missile to attack them, but it also ends up hitting Hard Man, making it no good to be used in small areas alongside allies. 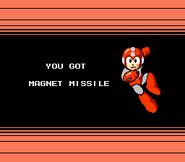 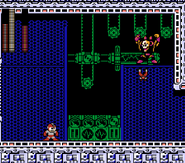