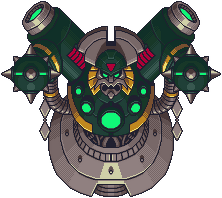 Maoh the Giant (マオー・ザ・ジャイアント, Maō Za Jaianto) is the boss of the Opening Stage of Mega Man X3. It is a gigantic Mechaniloid[1] that was part of Dr. Doppler's army when they attacked the headquarters of the Maverick Hunters. It attacks by punching with the large, spiked steel balls attached to its arms, crushing its enemies and building alike. Its only weak points are its head and arms. Unlike the Opening Stage boss in Mega Man X2, Gigantic Mechaniloid CF-0, touching Maoh's head or arms while they are in the background will not damage the player, and its attacks only inflict 1 unit of damage.

Maoh the giant appears in the first chapter from the Rockman X3 manga and in card #93 from Rockman X Mega Mission 3.

Maoh the Giant, as he would appear in Rockman Online.

Maoh the Giant in the Rockman X3 manga. 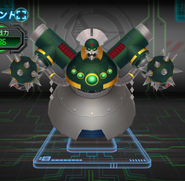 Retrieved from "https://megaman.fandom.com/wiki/Maoh_the_Giant?oldid=349693"
Community content is available under CC-BY-SA unless otherwise noted.