"I don't care who this Rebellion Army is. All I know is I'm not gonna stand by while they steal stuff I could be stealing!"
―Marino, when joining the party, Mega Man X: Command Mission

Marino (マリノ, Marino) is a female Reploid from Mega Man X: Command Mission encountered by X in the Giga City region, at the Gaudile Laboratory. She joins the Resistance and becomes a member of X's party.

Marino prides herself as a thief specializing in targeting trade secrets, such as new information, inventions and data on the latest developments in curing modern illnesses (including the Sigma Virus). Marino then spreads the acquired information throughout the world without seeking compensation.[1]

Marino is a Reploid with a slender female frame. Her armor is lightweight, fitting for a stealth operative, and pink in color with white and gold accents. She has curly pale green hair with bangs and a large ponytail. She wears a helmet with a mask that can be pulled over her face for anonymity. Her equipped weapon is held to her back by a holder/sheathe Mechaniloid called Hayohn (ハヨーン, Hayohn), which floats close to her.

Marino is a sly and charismatic individual. Despite being a thief, she tries not to be a mere crook, carrying a gallant and upbeat personality.[2] Unlike most criminals, Marino specializes in leaking technology and information to the public, showing that she is a philanthropist with very anti-corporate sentiments.[3] She does this for little to no pay, showing she is very selfless. Despite her under-handed ways, she has a kind heart, treating Cinnamon with friendliness and respect even though she was kidnapping her. Judging by her comments after Spider's supposed death and later Redips' betrayal, Marino seems to have had a checkered past and dislikes getting close to people, out of fear of getting hurt.[4]

Little is known about Marino's past. At one point a nurse Reploid in Central Tower recognizes her as a "model-type" Reploid (the context doesn't make clear if the term is meant as "celebrity" or "production" model).[5] Additionally, several Reploids in the Resistance are already familiar with her and look up to her, showing that she already has quite a reputation.

First appearing in the Gaudile Laboratory, Marino uses X's group's entry as a cover to intrude unseen into the facility, where she discovers Cinnamon. The two quickly form a bond, as Marino realizes she must take Cinnamon with her, especially if she is to make off with the new Force Metal Generator technology she is after.

During her escape, Dr. Psyche finds them and she ends up nearly killed by his Preon companions. Fortunately, Marino survives thanks to Cinnamon's healing ability, but she falls unconscious until X rouses her. She decides to join forces with X to get Cinnamon back. Once the party defeats Dr. Psyche, Cinnamon encourages Marino to join the Resistance with her, which she accepts.

After her introduction to the party, Marino has little role in the rest of the story, but is available to be spoken to or used in battle freely. Speaking to her between chapters reveals that Marino is interested in Axl's Copy Chip, and she begins investigating copy abilities in her spare time.[6] From this investigation, she learns that Spider's data was once checked into a copy research facility, a fact which irks her.[7]

Before heading up to the Heliport to await the transport that Colonel Redips had arranged to ferry X, Zero, and Axl back to base, Marino mentions that she's going to try a more legitimate lifestyle, though she does admit to maybe just stealing on the weekends. When Redips later exposes himself to be a Maverick and frames X and his friends, she compares his actions to that of a corrupt corporate executive. She accompanies them to defeat the corrupt official and clear their names.

In battle, Marino fights like a ninja, or more specifically, the kunoichi. She utilizes a pair of Beam Knives initially, which she draws with lightning speed (moderate hit ratio). Later on, she can be equipped with elementally themed bō shurikens and even a laser-bladed Chakram, with which she shows off her martial arts prowess and performs a 1-2-3 combo of slashes and a high-kick. She is the only playable character in the game able to equip either a shot or combat type main weapon, while others are limited to one type. 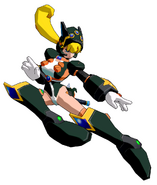 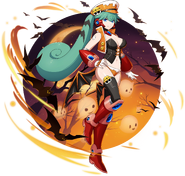 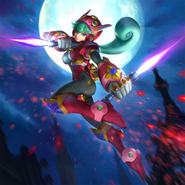 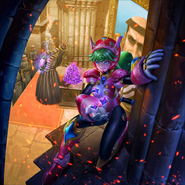 In the TEPPEN card Dauntless Work.

Marino in Tower of Saviors.

Illustration of Marino by Yoshihiro Iwamoto.