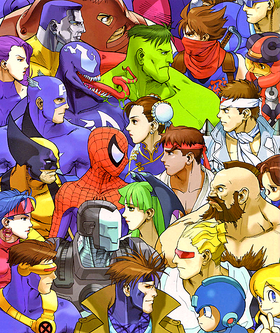 Marvel vs. Capcom is a sub-series of fighting games within the Versus series of games created by Capcom, in which characters created by the iconic superhero comic book company Marvel Comics and Capcom's own characters appear together. It was the first Versus series of crossovers involving Capcom, with other games later including other companies.

Many of the characters and fighting mechanics used in these games were first developed and refined in two other fighting games Capcom had developed earlier, serving as precursors to the series: X-Men: Children of the Atom, which featured characters strictly from the X-Men universe and also had Akuma as a secret character, and Marvel Super Heroes, which gleaned characters from Marvel's entire roster (X-Men included) and had Anita as a secret character. The first game to combine characters from the two companies was X-Men vs. Street Fighter, featuring Marvel's X-Men and Capcom's Street Fighter, and later Marvel Super Heroes vs. Street Fighter, where Mega Man had cameo appearances. Mega Man later became a playable character alongside Roll in Marvel vs. Capcom: Clash of Super Heroes and Marvel vs. Capcom 2: New Age of Heroes. Other playable Mega Man characters in the series include Tron Bonne, Servbot, Zero, X, and Sigma.