"Thanks for being friends with me"
—Mary Towa, Mega Man Battle Chip Challenge

Mary Towa (都輪 マリィ, Towa Marii), is an Electopian-Netopian girl with a pacemaker who prefers being alone and operates Ring.EXE. She and her NetNavi constantly argue with each other about whose fault it was that causes them to lose the tournament. She is a playable character in Mega Man Battle Chip Challenge and participates in the Battle Chip GP. Mary came from Netopia to stay a while in Yai's house as her homestay sister.

Mary stayed at Yai's house and became an exchange student in ACDC Town's School for a week. Although she envied other students who could play freely, she kept telling herself that it couldn't be helped, and she prefers to be alone anyway. Unknown to her, Ring, her NetNavi, secretly registered her name as a contestant in the Battle Chip GP. Ring told her that it was a 'special plan' to help Mary make a lot of friends. Mary was enraged at first, but soon after being introduced to Lan, Mayl, and Dex by Yai, she decided to enjoy the tournament to the fullest.

After finishing Class E tournaments, she was 'introduced' to Chaud by Lan. Lan described Chaud as a 'distant friend who always come to aid when needed'. This interested Mary, as how it is possible to help friends in trouble should the distance is faraway. Mary wondered to herself if she is somehow able to do the same like Chaud, helping and socialize with friends regardless of distance or health. Afterwards, Ring secretly (again) built another plan to socialize with Chaud and ProtoMan using a fake threat email. Chaud and ProtoMan explained that they admit Lan and MegaMan's strength, but do not really consider them as 'friends'. Chaud told her that they simply have their own way to socialize with others, thus suggesting Mary and Ring to do the same.

Mary and Ring appeared in the Battle Story Rockman.EXE manga by Keijima Jun and Miho Asada, in Volume 4. Mary ran away from Ayanokoji's Family bodyguards, and met Lan. They explained their intentions to participate in N1 Grand Prix, which purpose to execute a 'secret operation'. But since they absent in the preliminaries (probably because of Mary's bad health or Yai's disapproval) they attempted to sneak in instead. On the way, Lan and Mary fell into a pit where they encounter Anetta and PlantMan who were currently executing one of WWW plans. Mary and Ring cooperated with Lan and MegaMan, thus defeat PlantMan, with Anetta escaping afterwards. Afterwards Mary explained her true intention to make friends through Net Battle because of her poor health. Lan easily accepted them as friends, leading Mary to hug Lan in joy, resulting in Mayl's jealousy.

Next, cancelling their plan to sneak in the tournament, Mary followed Chaud to the Gas Supply Control Room on Ring's suggestion: "Should we solve the problem before Official do, we shall become famous!" Inside, Mary used Ring to assist ProtoMan in a fight against Mr. Match and FlameMan, who seemed to be immortal. Thanks to their help, Chaud realized FlameMan's secret (regenerating by using two candles), and the two pairs came victorious. Mary and Ring aren't mentioned again after this event. 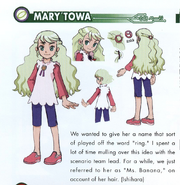 Concept art of Mary Towa.
Add a photo to this gallery

Retrieved from "https://megaman.fandom.com/wiki/Mary_Towa?oldid=324717"
Community content is available under CC-BY-SA unless otherwise noted.