Masa (マサ, Masa) is a fish salesman in the Mega Man Battle Network series. He is an energetic character who likes fish and calcium, and is the NetOp of SharkMan.EXE.

Masa appeared in the first Mega Man Battle Network game as an optional boss character that appears with a fish stand near Sal in the Government Complex after the defeat of ColorMan. He is a fish seller who plays a small role. He challenges Lan when he arrives at the Waterworks and loses. In the ending, he is having a bit of trouble competing against Sal's stand.

Masa appeared as a contestant from the Battle Chip GP.

Masa makes a cameo appearance in this game seen in the quarter-finals of the N1 Grand Prix, facing off against Tora and KingMan.EXE. He loses and didn't appear afterwards.

Masa was mentioned at the end of game by Ms. Mari, saying that he, Sal and Miyu has sent a letter congratulating the students. All three of them being mentioned together was possibly a reference to their roles in the anime.

Masa, known as Maysa in the English dub, is a main character in the first season of MegaMan NT Warrior where he, under the disguise of Commander Beef, Sal and Miyu are secret agents who act like everyday people while fighting criminal organizations and aid Lan Hikari and his friends fight evil. Maysa is the rival of Mr. Higsby for Ms. Mari’s affections over the course of the season, though Higsby is unaware that Commander Beef is Maysa and idolizes him. Though he is a main character throughout the first season Maysa is only makes one appearance in MegaMan NT Warrior Axess before disappearing completely, though a Beyondard version of him appears in Rockman.EXE Beast, and a JammingMan masquerades as him in Rockman.EXE Beast+.

In the manga, Maysa is a skilled fishseller. SharkMan won a tournament when he first appeared, where he says he wanted to challenge the two kids that defeated World Three (Lan and Chaud). Maysa asks Dex if he knew about them, who in turn states that he is one of the kids. Maysa challenges Dex, saying that he can take all the fish from his stand if he defeats SharkMan, but GutsMan has trouble defeating him and Mayl calls Lan to help him. MegaMan defeats SharkMan and Maysa gives a lot of fish to them before leaving. 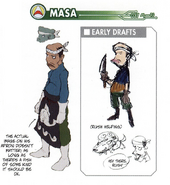 Masa in Mega Man NT Warrior (manga).
Add a photo to this gallery

Retrieved from "https://megaman.fandom.com/wiki/Masa?oldid=342158"
Community content is available under CC-BY-SA unless otherwise noted.