Start a Wiki
watch 02:27
The Loop (Games)
Do you like this video?
Mash Burner is a mushroom-based enemy from Mega Man 11 which appears exclusively in Torch Man's stage.  It emits flames from the top of its head, and can be seen walking or standing still.  If it is attacked, the flames can be shut off temporarily and it can briefly be used as a platform. Attacking a Mash Burner while its flame is out can destroy it completely, but doing so will cause it to explode, damaging Mega Man if he's caught in the blast.

Mash Burners are sometimes seen walking underneath metallic platforms, which poses a new threat: the heat of their flames can cause the metallic platforms to heat up as they pass beneath them, and the heated platforms can damage Mega Man if he steps on them.

Mash Burner is weak against Blazing Torch and Chain Blast as those will destroy it instantly, though Tundra Storm is useful for putting out the fire on top of its head, especially if used with Power Gear.

A kitchen assistant robot that can heat hotplates or boil water with the flames from its head. Hit it once to turn off the flames, and again to make it explode. Safe to ride when switched off. 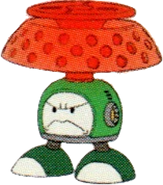 Mash Burner
Add a photo to this gallery
Retrieved from "https://megaman.fandom.com/wiki/Mash_Burner?oldid=284784"
Community content is available under CC-BY-SA unless otherwise noted.