"You know how I love a good mystery--just thinking about seeing all those things for myself gives me goose bumps!"
―Matilda's Letter, Mega Man Legends 2

Matilda basically resembles an adult version of Roll, sharing many characteristics such as the hair and eye color. However, her hair is short and groomed in contrast to Roll's wilder look. In Mega Man Legends 2, she wears a skintight black outfit with yellow lines similar to those from Yuna's dress, along with matching high heels and a brown shirt underneath. The outfit is complemented by a yellow plated necktie with the same symbol from Yuna's outfit, and she also wears one of Yuna's bracelets, indicating their connection.

Since Matilda's body is controlled by Yuna during the entire game, the only indication of her true personality comes from a letter she wrote to Barrell before her departure to Forbidden Island. The letter indicated a very adventurous and optimistic spirit, fitting of a Digger, although she did show concern for her family and asked Barrell to take care of Roll if something happened.

Under Yuna's control, Matilda has demonstrated superhuman speed and agility, easily dodging gunfire from Von Bluecher's security forces. She also seems to be unaffected by the harsh weather from Forbidden Island despite the lack of any protection. Although there is no explicit explanation for this, it is possible that this is the result of the parts Yuna used to save Matilda.

Matilda and her husband Banner are Diggers that traveled all over the world exploring ruins. 10 years before Mega Man Legends 2, ignoring Barrell's warnings, Matilda and Banner made an expedition to Forbidden Island using a Dropship to pass by the storm, and they never returned, being believed that they had perished.

In the beginning of Mega Man Legends 2, a mysterious woman that looks like her was seen posing as a reporter at Verner Von Bluecher's press conference onboard the Sulphur-Bottom, where she had taken the microphone of the reporter from Kattelox TV. She warns everyone present that the Mother Lode is not a treasure, but a disaster, and leaves with a flying Reaverbot (Gatz). It is this event that makes MegaMan and Roll start their adventure to discover if she is Roll's mother.

It's later revealed that she is actually Yuna using Matilda's body. Yuna had found Matilda severely injured on Forbidden Island, and in order to save her, Yuna transferred some of the nanotechnology from her body in an attempt to heal her. Matilda survived, but as Yuna used too much energy and parts from her body, she wasn't able to move and had to take control over Matilda's body. During the game, Yuna never leaves Matilda's body, and Roll's mother never does speak with Roll or other characters at all. Yuna tells MegaMan that she will return Matilda to Roll once it's all over, but at the end of the game, Yuna still resides within Matilda's body while Sera now resides in Yuna's original body, and they are trapped in Elysium with MegaMan. 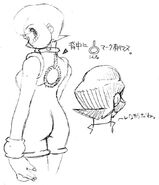 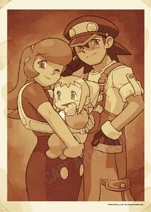 Photo of Matilda with Banner and Roll.
Add a photo to this gallery
Retrieved from "https://megaman.fandom.com/wiki/Matilda_Caskett?oldid=340107"
Community content is available under CC-BY-SA unless otherwise noted.