Mega Man 11
Mawaru C (マワルシー, Mawaru C) is an enemy from Mega Man 11. It's a rotund greenish robot that rolls around inside a wheel-shaped vehicle that has one small opening. The outside of Mawaru C's vehicle is completely indestructible, so the only way to destroy one is to aim for the opening by firing at the right time, which can be made easier by using the Speed Gear so you have a larger window of opportunity to shoot at the opening, especially if it is rolling around in a smaller area. An alternative is using a Power Gear-enhanced Tundra Storm due to its ability to effect the entire area. Marawau C's make their most prominent appearance in Block Man's Temple, but can be found in other stages such as Pile Man's construction site and even the Gear Fortress.

A roller robot designed to flatten uneven ground. Its tough shell lets it ram into walls all day without suffering damage, but sometimes it loses control and plummets into pits.

Location: Block Man's Stage (And Others) 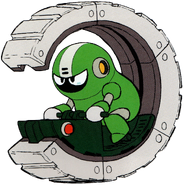 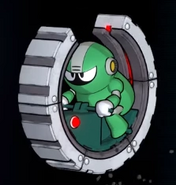 Its name is probably a combination of the words, "mawaru" (回る, roll) and "C" (its shape).