Mecha Dragon (メカドラゴン, Mekadoragon) is a giant robotic dragon boss from the Mega Man series. Most of the Mecha Dragon's body is a hydrogen balloon that allows it to fly. It mainly attacks by releasing flames from the mouth.

Mecha Dragon is the first boss of the Wily Castle. When the Mecha Dragon appears, it will chase Mega Man breaking the platforms along the way, and at the end of the path battle will commence. While the Mecha Dragon is chasing Mega Man prior to the battle, it is invulnerable to all weapons and any contact with the Mecha Dragon is lethal. During the battle, it hovers on the left side of the screen shooting fireballs, and touching him is lethal. Being full of hydrogen, the Mecha Dragon is extremely sensitive to heat, and a fully charged shot of Atomic Fire deals significant damage. However, Mega Man can only fire up to two fully charged shots with this weapon before most of its weapon energy runs out, so charged Atomic Fire shots cannot be used alone to destroy the Mecha Dragon. One strategy when facing it, is to stand on the top block to avoid falling into the pit and use Quick Boomerangs. As the Mecha Dragon does not have a recovery period after being hit unlike the Robot Masters, the rapid shots of the Quick Boomerang can deal damage faster than its actual weakness. Another and somewhat safer method, is to simply use the Mega Buster since it inflicts the same amount of damage as the Quick Boomerang and allows the player to keep their distance.

A third strategy that involves timing, patience, and caution requires the player to stand on the top block and lure Mecha Dragon to him, and once it approaches close enough the player must quickly climb down to the bottom block taking care not to get hit by the fireballs the creature occasionally spits, as they can knock Mega Man down into the bottomless pit below, losing a life. Once standing on the bottom platform, the player should shoot a Crash Bomber at its belly, and, although it does not seem at first that the boss receives any damage, the creature will quickly fly down towards the low platform where the player is standing while the explosions of the detonated weapon are still taking effect, reaching its head and dealing damage multiple times. Then, as the boss approaches again, the player should quickly climb back to the upper platform and repeat the process. If the player is successful at waiting for the right opportunity to time the detonations, it will take two to three turns to finish this boss battle using the bombs. However, this last method is not recommended for beginners, as it is too risky moving continuously from upper to lower blocks and vice-versa while watching out for or evading Mecha Dragon's attacks.

Mecha Dragon (named Mech Dragon in the game) is the penultimate boss from the "Recover the new parts!" course. At first it only attacks by releasing flames, but after losing half of its energy, it will also release longer flame streams and spit eggs that contain smaller versions of itself. Mecha Dragon can only be damaged on the head, and as it often changes the height it is flying, players may need to Wall Kick or use attacks able to reach the head when jumping isn't enough. Its weakness is the Quick Boomerang.

The smaller Mecha Dragons also appear to assist the Wily Machine in the same course.

Amount of damage in units that the Mecha Dragon receives from each Special Weapon in Mega Man 2.

The Mecha Dragon appears in issue 12 of the Mega Man comic by Archie Comics. It attacks eight of Dr. Light's Robot Masters-Bomb Man, Elec Man, Guts Man, Fire Man, Cut Man, Ice Man, Oil Man, and Time Man-when they enter the Wily Castle looking for Mega Man. The mechanical beast was joined in its attack by Mega Man, who was under Wily's control due to a virus. However, the Robot Masters succeeded in freeing their friend, who promptly destroyed the Mecha Dragon.

Mecha Dragon is a large dragon-shaped robot that protects Wily's fortress. In order to make flight a possibility for this giant robot, it is mostly composed of helium tanks. All non-essential parts were also removed from Mecha Dragon's design to reduce his physical weight as much as possible. Mecha Dragon's external parts, including his head, arms, legs, tail, and even wings are all mechanical and each have multiple functions. The main function of its head, for example, is to spew flames with its built-in flamethrower, but it also acts as a temperature control system which adjusts the heat of the gaseous bodies contained within its torso.

In Mega Man Megamix, Quick Man uses the Mecha Dragon as a transport to reach Mega Man in the Skull Satellite, and Quick Man cuts the dragon into pieces alongside Flash Man as he wants to face Mega Man by himself.

Later in Mega Man Gigamix, Quick Man uses Mecha Dragon to save Shadow Man, who was falling to his doom after facing the Stardroids in space. 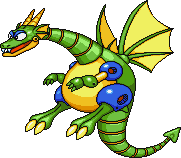 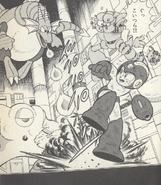 Mecha Dragon in Rockman: Yomigaeru Blues.
Add a photo to this gallery

Retrieved from "https://megaman.fandom.com/wiki/Mecha_Dragon?oldid=304115"
Community content is available under CC-BY-SA unless otherwise noted.