"Rockman no Theme - Kaze wo Tsukinukete" by Jin Hashimoto

The series is the second animated series in the Mega Man franchise after the 1994 series, and is the longest running Mega Man TV show to date, having spawned four more seasons totaling 209 episodes and a film. The first of the next seasons, Axess, was dubbed in English while Stream, Beast, and Beast+, and the movie, Hikari to Yami no Program, set during Stream, only aired in Japan. Dubs of many non-Asian countries are based on the MegaMan NT Warrior English dub, keeping the music changes, censorship, and dialogue alterations.

It would later be succeeded by Mega Man Star Force, set 200 years in the future, which spawned a second season that only aired in Japan, Shooting Star Rockman Tribe.

The WonderSwan Color video game Rockman.EXE WS features an rough retelling of the first season of the anime as its plot.

The season is split into two parts, known as “First Area” and “Second Area” in Japan. While some stories were influenced by the games, it heavily diverges from the source material in terms of how events are played out and when they happen.

The "First Area" consists of episodes 1 to 26 and contains story elements of the original Mega Man Battle Network. It details the adventures of Lan Hikari and his new NetNavi MegaMan as they battle against Mr. Wily and his criminal organization World Three. Lan and MegaMan meet many new friends and learn about the Program Advance while preparing to face off against their rivals Chaud Blaze and ProtoMan during the N1 Grand Prix. The First Area's reaches a climax with the revival of the dangerous PharaohMan and the deletion of MegaMan. With the help from Lan's father and the Net Agents, MegaMan is brought back to life to finally stopping PharaohMan's threat.

The "Second Area" starts with episode 27 to 56 and contains a loose adaptation of Mega Man Battle Network 2. It follows Lan and MegaMan’s adventures around the world as a prize for winning second place in the N1 Grand Prix. Lan, MegaMan, and the rest of their friends then battle against the NetMafia Grave and learn about Bass. MegaMan gains the power of Style Change and new technology sets the background for Axess. Second Area reaches a climax with the Grave Virus Beast devastating the entire internet, with MegaMan being the only one who can stop it all. The remainder of the episodes cover more lighthearted stories, ending with the Life Virus acts as the final battle of the season in episode 56, mirroring the finale of the original Battle Network.

As a way to promote the newest game at the time of the anime's airing, Mega Man Battle Network 3, certain aspects from it are mixed in. This includes the N1 Grand Prix tournament and introducing the new characters from that game: Tora, KingMan, Chisao, and DrillMan. As well as MegaMan's brand new form, Bug Style.

In the English dub, certain episodes were omitted, aired out of date and/or censored. Also the original American broadcast Kids' WB created two episodes that were edited down from multiple episodes: There's No "I" In Team (Part 1)/There's No "I" In Team (Part 2) and DenTech City's Deep Freeze!/Crimson Flash!. Episodes 18 and 30 are absent on the anime's English official site, leaving it with 50 episodes, causing the numbering of the episodes from episode 18 onward to be wrong.

MegaMan NT Warrior edits out the entirety of the original Japanese soundtrack in favor of rock and techno songs. The intro and ending themes were replaced by a techno/video game theme.

"It is the year 200X, and it is almost like living in a video game. I'm Lan Hikari, welcome to DenTech City, where the whole city is linked together through a cyber matrix that connects everything. My friends and I have these powerful handhelds called PET that lets us battle in a virtual world with our cyber-warriors. They are called NetNavis; and my NetNavi is MegaMan. There's also an evil force, World Three, which wreaks havoc in the City by infecting the cyber matrix with computer viruses! Along with our friends and their personal net-warriors, MegaMan and I are gonna delete these viruses, and rinse society of all chaos and crime. Jack In! MegaMan! Power Up!"
—Lan Hikari's introduction from the English dub

The MegaMan NT Warrior English dub was done by VIZ Media and produced at Ocean Studios. The dub contains many notorious traits by other dubbed kids anime at the time. These include straying away from the Japanese script, adding dialogue that wasn't there, names are changed from the English video game, giving characters random accents, complete soundtrack change, cut out scenes for time, and heavy censorship. The initial broadcast also suffers from reorganized episode airings, skipping entire stories to get to the N1 Grand Prix faster, then later skipping to get to the introduction of Net City faster. The initial American broadcast also had 2 episodes that were edited down version of multiple episodes. The entirety of this season's dub came out in DVD and are censored like the broadcast.

The English dub has an "announcer" for events that happen on the internet, such as a NetNavi being deleted or logged out (i.e., the announcer saying “MegaMan logging out” when MegaMan returns to his PET) where as there was none in the original Japanese dub.

In the English dub of the show, the episodes Ice Ice Baby!, Hot Tempers!, and Game Off!, which featured Maddy, Mr. Match, and Count Zap's rematches with Lan and MegaMan respectively, were all shown towards the end of the season rather than at the beginning of the season like the original Japanese version, making it seem as if the World Three had become active again after Grave was defeated. In the original Japanese version, the World Three stayed disbanded and its members had become more like allies to Lan and MegaMan at that point. This is reinforced in the dub of Axess, where Mr. Match vows the defeated the two one day, whereas in the Japanese version he was simply happy to help them defeat PlantMan.

An alternate English dub of the first season, done by Voicework Unlimited, was made for the South-East Asian markets with a script that faithfully followed the original’s with no episodes cut out. The show also kept the Japanese names, terms, and the original Japanese soundtrack. However like MegaMan NT Warrior, some characters were given random accents.

It aired in Singapore on Kids Central[3] from 2005 to 2007. All 56 episodes were released in two VCD sets with the Chinese dub with Ep. 1-27 on the first set and Ep. 28-56 on the second, mirroring the First and Second Area split of the Japanese version. While it's lost to time as to how the show aired on TV, this release, unlike the NT Warrior DVDs, is uncensored.

In Japan, the series was released across 65 DVD volumes containing all five seasons as well as a separate DVD release for the film. The first season was also released on VHS. Rental stores had different DVD art than retail DVDs to differentiate them.

In America, only the first season of MegaMan NT Warrior was released across 13 volumes. The DVDs include only the censored English dub and the Latin America Spanish dub.

MegaMan NT Warrior achieved popularity among Japanese viewing audiences. According to a viewership sample conducted in the Kantō region by Video Research, the anime drew in an average of 4.5% and a maximum of 5.9% of households during the last year of its original run.[6] 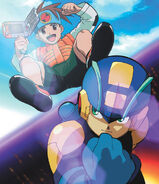