Mega Buster, known as the Rock Buster (ロックバスター, Rokku Basutā) in Japan, is a powerful buster that is the main weapon of all of the main characters carrying the name of Mega Man (Mega Man, Mega Man X, Model X, Mega Man Volnutt/Trigger, MegaMan.EXE, and Star Force Mega Man) in the Mega Man franchise.

The original Mega Buster, originally called simply "P" (possibly standing for "player" or "power" as in the menu it displays the player's life energy instead of weapon energy) in early games, also known as Arm Cannon[1] outside Japan, is Mega Man's primary weapon in the Mega Man games.

This Mega Buster is an ambidextrous arm cannon built by Dr. Light. It fires "Solar Bullets" (ソーラーブリット, "Solar Bullets"), energy bullets made of highly compressed solar energy,[2][3] the same energy source used by Mega Man. It is a powerful weapon capable of puncturing steel and destroying boulders. A single, uncharged Solar Bullet can blow a five foot diameter hole in a wall of solid stone.[4] With a few exceptions, like the non-canon remake Mega Man Powered Up, its bullets can pass through most walls.

The New Mega Buster (ニューロックバスター, Nyū Rokku Basutā, New Rock Buster) is an upgrade made in Mega Man 4. Mega Man can now charge solar energy to increase the power of his shots, attacking with a Charge Shot. The buster can be charged to two different levels: The first charge shot is bigger than normal shots, but causes the same amount of damage, although it can rip through enemies that it defeats (compared to standard shots, which dissipate even if they destroy an enemy). A fully charged shot is bigger than the first, and deals three times more damage than normal shots. Except for the color, the charge shot from Proto Man's Proto Buster uses the same graphics from this buster's charge shot in Mega Man 9 and 10.

Super Mega Buster (スーパーロックバスター, Super Mega Buster , Super Rock Buster) is a modification made by Dr. Cossack in Mega Man 5. The charge shot gets more power having a larger projectile and shorter charge time, but if Mega Man suffers damage while charging a shot, the charged energy will be lost and he will need to charge again.

In Mega Man IV, Mega Man doesn't lose charged energy when hit, but a fully charged shot causes recoil, throwing Mega Man backwards a small distance from his current position. If the player gets a Game Over several times in the same stage without leaving it, Dr. Light will give an enhancement that will make it charge energy faster. The recoil is also present in the opening scene of Mega Man V, where the charge shot couldn't harm Terra.

The Mega Arm, known as Rock'n Arm (ロックンアーム, Rock'n Arm) in Japan, is an upgrade of the Super Mega Buster done by Dr. Light in the game Mega Man V to help Mega Man in his battle against the Stardroids. Unlike the Super Mega Buster, it doesn't have recoil from charge shots, and the charged energy isn't lost when hit. It can charge energy to fire Mega Man's fist like Hard Man's Hard Knuckle and the Rocket Buster. Mega Man is incapable of using his regular Mega Buster while his arm is detached from his body, and therefore is incapable of fighting back until it is reattached.

There are three enhancements for the Mega Arm:

From Mega Man 7 onward, Mega Man's main weapon is only referred to as the "Mega Buster" and functions like the New Mega Buster in most appearances, using a similar charge effect (in terms of color and flickering pattern) and projectile behavior (the shot is a narrow, fast-moving projectile instead of the wide, medium-speed shot produced by the Super and Hyper Mega Busters) and does not lose charge upon damage.

Super Adventure Rockman
Super Smash Bros. for Nintendo 3DS / Wii U
The Double Mega Buster is the Mega Buster used on both arms. The Double Mega Buster was only used by Mega Man at the end of Super Adventure Rockman in order to defeat Ra Moon, charging a large amount of energy in both busters, which he then fires simultaneously to generate an incredibly powerful charge shot. However, it is too dangerous for Mega Man to use regularly, as it drains his energy much faster than he can normally replenish it, also causing him to overheat.

In Super Smash Bros. for Nintendo 3DS / Wii U and Super Smash Bros. Ultimate, Mega Man will transform both of his arms into busters when using Flame Blast and Spark Shock, with a similar effect of having to vent heat from them afterward.

Besides its default setting, Mega Man can use the Mega Buster to fire Special Weapons. It can also be enhanced with additional power up parts.

The X Buster (エックスバスター, X Buster) is the Mega Buster Mark 17[5] used by Mega Man X, his primary weapon in all games from the Mega Man X series. Like the original Mega Buster, it can be used in any arm and fires highly compressed blasts of energy, which can be charged up for extra power.

Mega Man Volnutt's Mega Buster differs from most models in that it does not allow for charging; it instead allows for rapid fire, similar to the Bass Buster or Axl's pistols, only being able to charge in Tatsunoko vs. Capcom. Mega Man's buster is modified by Buster Parts. These modify four abilities: Attack, Energy, Rapid, and Range. Normally, Mega Man is only allowed to use 2 Buster Parts at a time, but upon obtaining the Adapter Plug, he can equip 3.

Throughout the Mega Man Battle Network series, MegaMan.EXE's Mega Buster goes through many upgrades and modifications. In the first two games it starts weak, slow, and unable to charge, but after receiving enough Power UPs it becomes a powerful rapid fire weapon with the ability to fire charge shots. Charge shot is available from the beginning in later appearances.

The Mega Buster from the Star Force Mega Man is, instead of a traditional buster, Omega-Xis's head. This version charges automatically, with automatic rapid fire added. Its stats and abilities are changed with various weapons. In the third game, as an effect of wearing the Hunter-VG, Mega Man's left hand is now normal, with a design similar to Omega-Xis. The Mega Buster is now more traditional in design as well. This version of the Mega Buster allows Mega Man to lock on and teleport to the enemy to use close range cards.

A copy of the Mega Buster appeared in Power Stone 2 and the Dead Rising series.

The Mega Buster appears in Devil May Cry 5, available to Nero as a Devil Breaker for those who purchased the Deluxe Edition of the game or purchased the Deluxe Upgrade DLC. Modeled after Mega Man's Mega Buster, this essentially grants Nero a second firearm in the form of plasma shots and can be charged for a more powerful blast. Using the Mega Buster also changes Nero's jump to mirror that of Mega Man's as well as a Slide dodge maneuver and holds the Buster in the same fashion when running. As standard for all Devil Breakers, the Mega Buster has a Wire Snatch tool that immediately pulls enemies towards him or to them.

Mega Man's Plasma Cannon functioned somewhat differently from the Mega Buster in the animated series. It is a plasma weapon that fires plasma shots instead of solar powered shots. Mega Man could only use the blaster on his left arm, giving him an asymmetrical arm design. It was never show to have charging capabilities, but Mega Man was shown at least once to be able to manually adjust its power, and apparently on a subconscious level as well as, depending on how angry he was. He can make his shots very small,[6] powerful enough to pierce a robot,[7] or even ricochet.[8] By touching a robot, Mega Man can steal that robot's power with his internal weapons converter instead of copying it, leaving the target defenseless.

Mega Man's Mega Buster functions similarly to others Mega Busters, being able to fire normal and charged shots. It has three rectangles that functions as a display to select copied schematics manually. Unlike other busters, this version uses a replication beam to download a Robot Master's schematics, allowing Mega Man to copy a weapon without defeating or making physical contact first at the cost of taking time to fully acquire the weapon.

Like in the games, Mega Man can utilize the Mega Buster. The Mega Buster was also the primary reason why Rock was named "Mega Man" instead of "Rock Man" or "Copy Man." However, he cannot use it when utilizing a Special Weapon, due to his Variable Weapons system only allowing himself to use one weapons system at a time. In addition, its power source was a chip. Removing the chip would disable the Mega Buster, as Sonic the Hedgehog proved during their fight in the Worlds Collide arc. Sonic, when continuing their fight in Mega Man's realm, sarcastically referred to the Mega Buster as a "lemon shooter" when arrogantly telling Mega Man that he can't fire his weapon and that he'll destroy Eddie, Rush, Tango, and Beat easily.

Prior to the fight with Sonic, Mega Man encountered the Roboticized Masters and learned that a charge shot from the Mega Buster was able to stun them in combat. After teaming up with Sonic, the charged shot combined with Sonic's Spin Dash caused a cascade failure in the robotization process with Tails Man, returning him to normal when his weapon data was downloaded. Later on, Tails performs an upgrade on the Mega Buster in mid-battle against Charmy Man, Espio Man, and Vector Man while Sonic distracts them, giving Mega Man's charge shot the same properties as Sonic's Spin Dash, creating the Spin Dash Blast[9] / Sonic Shot[10] which can deroboticize a target with a single clean shot, though Mega Man still needed to make use of Special Weapon weaknesses in order to get a clean shot in some cases. Later, Mega Man and Sonic, in super forms, used a giant charge shot with Super Sonic as projectile to destroy the Egg-Wily Machine X. Mega Man then charges Chaos energy in the Mega Buster to use Chaos Control, reverting the effects of the Genesis Wave in his world.

Mega Man later used the Double Mega Buster as a last ditch effort to stop Ra Moon, an act that came very close to destroying him.

In the Off Panel for Sonic the Hedgehog #248, Metal Sonic was outfitted with a Mega Buster, replacing his rocket torso. However, it sent him flying when he attempted to use it.

The Mega Buster is an unique weapon able to scan and replicate the weapons of other robots, the Weapon Change System being one of Dr. Light's greatest accomplishments. Even a century later, in 21XX, scientists still would not be able to replicate anything close to the Mega Buster for common use. It was later upgraded to be able to fire charge shots, and as Mega Man gained experience, he became more efficient in battle without having to rely on special weapons.

The Copy Mega Man is capable of exploring the limits of his own potential regardless of personal danger, whereas the real Mega Man's power levels are set to the maximum level that is possible without running the risk of overloading him.

Five Mega Mans with their Mega Busters in Super Smash Bros. for Nintendo 3DS / Wii U.

The Mega Buster in the Archie Mega Man comic. 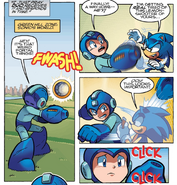 Mega Man with a Mega Buster in both arms in the Mega Man comic. 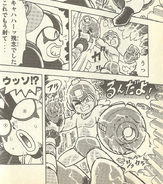 Mega Man using the Mega Buster in the Rockman 8 manga.