MMKB
Register
Don't have an account?
Sign In
Advertisement
in: Weapons and abilities, Time and space weapons

Mega Man uses the Black Hole Bomb to catch the opponents, and then X (Mega Man X), Star Force Mega Man (Mega Man Star Force), MegaMan Volnutt (Mega Man Legends), and MegaMan.EXE (Mega Man Battle Network) all appear alongside the original Mega Man. All of them then use their Mega Busters against the trapped opponents. The screen will focus for a split second on the character being hit, and then the cutscene will end as the character is blasted away.

In Super Smash Bros. Ultimate, Proto Man and Bass also appear in the move, firing the Proto Buster and Bass Buster alongside the blue heroes. 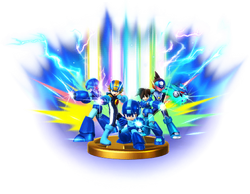 For Mega Man's Final Smash, he teams up with all-stars X, MegaMan Volnutt, MegaMan.EXE, and Star Force Mega Man, and they fire their Mega Busters in unison. The Black Hole Bomb fired at the start draws enemies in, and as long as that hits, the Mega Busters will follow. Make your foes see stars!