Single-player
Multiplayer (up to two players)

10-megabit ROM cartridge
Mega Man's Soccer, named Mega Man Soccer in the American box art, known in Japan as Rockman's Soccer (ロックマンズサッカー, Rokkumanzu Sakkā), is a soccer video game released by Capcom for the SNES in 1994. This is the first game in the classic Mega Man series to appear on the SNES.

A few months had passed since the battle with Dr. Cossack in Mega Man 4.[1] One day, Mega Man, Roll, and Dr. Light are watching a game of soccer on TV, when suddenly, robots take over the field. Soccer fields all over the world were thrown into chaos! Familiar enemy robots restored by Dr. Wily were running out into the field and ruining soccer games. To deal with this emergency situation, Dr. Light modified Mega Man and sent him to make things right, saving soccer and the dreams of those who love the sport by playing soccer against Dr. Wily's robots.

Mega Man's Soccer doesn't have an ending and the player returns to the title screen after completing the game, but the game does contain an unused ending and credits sequence.[2][3] They are only accessible through a cheat device.

As noted above, the game had unused endings and credits sequences that were only accessible via a cheat device:

In Championship mode, Mega Man managed to confront and defeat Wily at his arena. Wily then proceeded to beg for mercy, and then fled when the lair began to collapse. Mega Man then collapsed to his feet as rubble rained down on them. Proto Man then watches the sea, and then teleports out. It then shows Wily's lair collapsing while Wily's saucer escapes into the distance. It is unknown whether Mega Man managed to escape from the lair.

In Tournament mode, Mega Man celebrates his win with Beat carrying a banner saying "You Are The Champ!" and Kalinka and Roll arriving to stand at Mega Man's place. It then shows Proto Man watching the sea and teleporting out, just as in the Championship ending.

The game has four modes:

Each Robot Master uses a special ability with the ball. Dr. Wily is only playable in Elec Man's and Dust Man's teams from League Mode.

*One member from each team defeated by Mega Man in Capcom Championship joins his team, having a total of 10 reserve players in the last field. 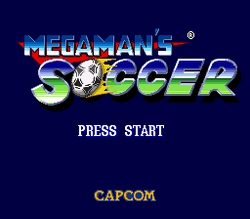 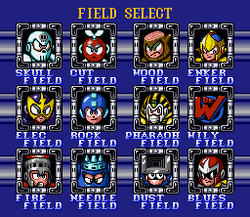 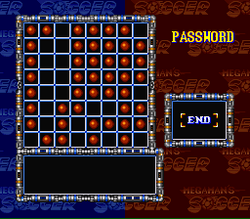 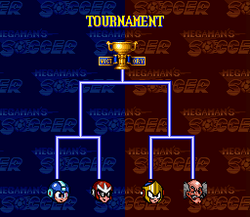 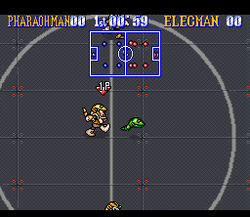 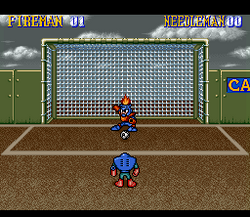 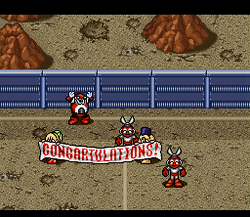 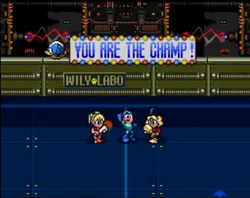 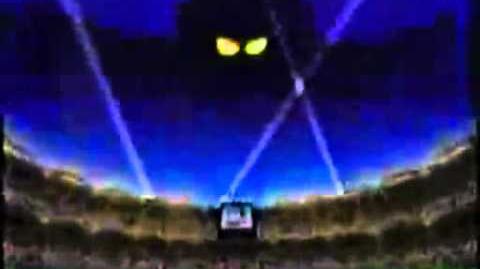 While the game itself was not covered in Archie Comics' Mega Man comic series before the series went on hiatus, Ian Flynn has stated that he had a plan for Mega Man's Soccer.[4] It was however referenced in Mega Man #23, where one of the swarming reporters questioned about a potential Soccer Endorsement Deal for Mega Man.