Mega Man: Dr. Wily's Revenge, known as Rockman World (ロックマンワールド, Rokkuman Wārudo) in Japan, is the first Mega Man entry in the Mega Man World series for the Game Boy in 1991. The game was also released for the Nintendo 3DS eShop.

The game recycles content from the original Mega Man for NES and its sequel, Mega Man 2. At the start of the game, only four Robot Master stages are available to choose, all of which are from Mega Man. The second four Robot Masters, all of which are from Mega Man 2, are fought as bosses in the Wily Castle. This would become a staple of the Game Boy games until Mega Man V, the only Mega Man game for Game Boy not to recycle large amounts of content from the NES games.

Thanks to the efforts of Mega Man, the super robot created by Dr. Light, Dr. Wily's ambitions did not come to fruition. Peace had returned to the world, but Dr. Wily had secretly altered the industrial robots developed by Dr. Light. After everything that had happened, Dr. Wily had not abandoned his desire for world domination. In order to stop Dr. Wily from realizing his dream, Mega Man headed to the city.

Once the four Robot Masters are taken down, Mega Man heads to the Wily Castle only to discover that four more Robot Masters await him there. To make matters worse, Dr. Wily has constructed a new powerful robot, a Mega Man Killer known as Enker. Enker has the ability to absorb Mega Man's shots with his lance and return a powerful blast of energy at him with his Mirror Buster; however, Enker is defeated, and Mega Man chases Wily to his Wily Station above the Earth, using Enker's own Mirror Buster to defeat him. After the battle, the Wily Station is destroyed and Mega Man returns to Earth inside a space shuttle.

Unlike its NES counterpart, only four Robot Masters are available to choose from at the start of the game. These four are taken from the original Mega Man.

After Enker is defeated, Mega Man must fight the Wily Machine I in the Wily Station.

General critical reception for Mega Man: Dr. Wily's Revenge has been above average, a popular opinion being that the game retains the respectable Shoot 'em up gameplay of the earliest NES entries in the series.[1][2][3][4][5] "What makes this game especially attractive to adults," proclaimed Entertainment Weekly's Bob Strauss, "is that you can begin your quest on any one of four stages, thus avoiding that linear, start-over-again-from-scratch quality that only 12-year-olds find hypnotic."[5] The use of old stages and bosses has not been universally positive. GamePro was disappointed by the game's lack of originality but preferred its use of recycled content to poorly made new content.[4] In a 2007 retrospective of the Mega Man franchise, 1UP.com writer Jeremy Parish found the use of rehashed details acceptable for its original release, but believed that Dr. Wily's Revenge "hasn't really held up".[6]

Reviewers have also commented on the game's high difficulty level. Craig Skistimas of ScrewAttack stated that certain parts of the game simply require one to have played before in order to succeed.[1] Allgame contributor Colin Williamson noted the game as extremely hard due to its "pixel-perfect jumps", the "sheer number of attackers and flying bullets", and a lack of checkpoints within each stage.[2] IGN editor Lucas M. Thomas pointed out that the large size of the player character within the small Game Boy screen makes dodging enemy attacks overly challenging and sometimes impossible. He furthermore observed the difficulty to be compounded by a lack of helpful Energy Tanks introduced in the NES Mega Man sequels.[7]

The readers of GamePro voted Dr. Wily's Revenge the best handheld game of 1991.[8] Nintendo Power readers voted it the fifth-best Game Boy game of that year.[9] In North America, Dr. Wily's Revenge was released under Nintendo's Player's Choice best-seller label in 1996.[10] The game was followed by four sequels on the Game Boy, of which the first three similarly recycle content from the NES games.[7][6] In Japan, the game was made available on the Nintendo Power cartridge service on March 13, 2001.[11] Capcom had planned to release a full-color compilation of all five Game Boy games on the Game Boy Advance in 2004, but the project was cancelled.[12][13] In 2011, Dr. Wily's Revenge was released as a Virtual Console launch title on Japan's Nintendo eShop for the Nintendo 3DS.[14] The game made its way to PAL region and North American eShops later that year.[15][16]

The character Enker, who debuted in Dr. Wily's Revenge, appeared as a boss in the Game Boy game Mega Man V and as a playable character in the Super Nintendo Entertainment System game Mega Man Soccer.[17][18] A downloadable stage in Mega Man 10 features Enker as its boss and his Mirror Buster weapon as the reward for beating him.[17] 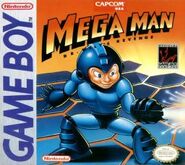 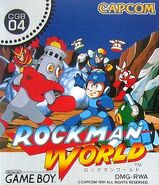 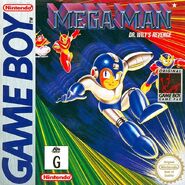 Europe
Add a photo to this gallery

Cutman in the ending.

Enker in the ending.

Mega Man walking inside a space shuttle in the ending.

The ending screen
Add a photo to this gallery

Guidebook
Add a photo to this gallery

Retrieved from "https://megaman.fandom.com/wiki/Mega_Man:_Dr._Wily%27s_Revenge?oldid=331319"
Community content is available under CC-BY-SA unless otherwise noted.