View source
watch 02:56
Raise a Floppa - The Loop
Do you like this video?
Play Sound
This article is set to be rewritten to fit MMKB's standards. Please note that large changes will be made and that your edits may be heavily edited or erased.

Roger Lee
Mega Man is a comic book based on the original Mega Man series published by Dreamwave Productions alongside other comic books based on Capcom games,[1] but they were cancelled due to complications that led to the company going out of business on January 2005. The series was published in four issues between September-December 2003, and the four volumes were also collected into a pocket-sized trade paperback.

The story takes place in a fictional setting known as Mega City, formerly known as Monstropolis.

Rocky Light and Dr. Light are talking in a car. Rocky doesn't want to go to school because he is a robot and not a human, but Dr. Light says that he should go as his independent determination programming matures by interacting with humans. Traffic is slow and they discover that a large robot called Barrage Man is jamming and destroying the Light Perfected Traffic Control System (LPTCS), being the third municipal system created by Dr. Light to be attacked. Mega Man fights against Barrage Man and defeats him, returning the LPTCS to normal.

Rocky is sent to the Mega City Junior High School, where he is bullied by a trio called the Boltz Brothers and befriends Alan and Chelsea. After school Auto takes Rocky and informs him that the Light Automatic Traffic Speed Governor has been overridden and an out-of-control auto chase is threatening the city, which Dr. Light is trying to solve, and Mega Man is sent to stop a bank-robber called Express Man. A mysterious red robot (Proto Man) watches their battle.

Mega City Aerodrome's tower, one of the safest airports from the world thanks to the Light Perfected Air-Traffic Control System, is attacked by Heat Man and causes one airplane to crash in other, making it fall. Mega Man and Rush arrive in time to avoid the jet from crashing, and they face a swarm of Mets. Heat Man leaves angry. In school, the Boltz Brothers pursue Rocky all day and they set a trap for him in the basketball court, fighting against him. The Boltzes' uncle (Dr. Wily) appears and stops their fight. He is a friendly man that tells Rocky he is an old friend of Dr. Light.

Dr. Light pick up Rocky at school and they talk about the differences between human and robots and the independent determination chip in the way back home. When they arrive, several robots known collectively as Multi Man attacks them, destroying Dr. Light's flying car, damaging Auto, and capturing Mega Man.

After hitting the Multi Man he was inside several times, Mega Man manages to escape, but has trouble with the other Multi Men. Proto Man appears and helps him, and they have a long battle against an army of Multi Men. After a while, all Multi Men leave the area, and so does the red robot. Mega Man tells what happened to Dr. Light as they return home.

In the next day, Rocky sees that there will be a student council dance at night and he invites Chelsea. At the party, the lights turn off for a moment, and when they return the DJ robot malfunctions and starts playing an awful and loud music. Rocky transforms into Mega Man and stops him, and soon after returns to normal and takes Chelsea home. Rocky is starting to like school, returning to home very happy, but in his way back he sees Dr. Light's house on fire. Heat Man and other robots are stealing the house, and Mega Man arrives on time to see their transport leaving. The house is completely destroyed with Dr. Light, Roll, Rush and Auto missing.

While searching the house, Mega Man sees the mysterious red robot that helped him before and goes after him believing that he attacked the house. After solving some misunderstandings, they team up and search for Dr. Light.

Dr. Light and the others were actually safe inside car, and Dr. Light visits "Dr. Wiley Robotics" to ask his former assistant Dr. Wiley (Dr. Wily) to stop sabotaging his municipal inventions, knowing that he is the only person that would know the weaknesses of the technology he developed. Wily angrily says that they developed the technologies together and he went out on his own so Dr. Light would not steal his ideas. Light doesn't understand why he left and why he is attacking him, and Wiley replies that he never understood him, sending skull-shaped robots to attack Light. Dr. Light uses a device to destroy Wiley's robots and informs that he notified the police. Unwilling to be defeated by Dr. Light, Wiley transforms his building into a gigantic Yellow Devil-like robot to attack the city.

Mega Man and Proto Man try to stop the robot, but it is immune to their attacks. The two split up, Mega Man going after Dr. Light while Proto Man cuts the giant robot's power and makes it explode. Proto Man then leaves, and Auto, Roll and Rush appear to pick up Mega Man and Dr. Light.

A short story at the end of the last issue. Mega Man X and Zero are fighting against an army of Maverick Reploids in the darker future of the Mega Man X continuity. With Sigma gaining ground and the odds unfavorable to them, "the doctor" (presumably Dr. Cain) agrees with their idea and X travels back in time to ask Dr. Light for help.

The last frame of the comic contained the message "To be continued in MEGAMAN X. Coming soon from Dreamwave!!". The company went out of business before the issues could be printed, alongside other Capcom comics that were planned to be released, including Darkstalkers and Rival Schools. 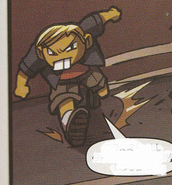