Mega Man is a playable character in the Marvel vs. Capcom crossover series of fighting games, appearing alongside other prominent Capcom and Marvel characters such as Ryu, Strider Hiryu, Captain Commando, Spider-Man, Wolverine, and War Machine.

Mega Man is one of the heroes from another universe that Xavier subconsciously summoned to help stop Onslaught. In his ending, Mega Man defeats Onslaught and obtains the Special Weapon Magnetic Shockwave. He also appears in Roll's and Captain America's endings.

Mega Man appears as an unlockable character with the same moves from the previous game.

Mega Man appears on a poster in the Days of Future Past stage along with other cast that were in Marvel vs. Capcom 2, with all but Mega Man with the label of either "Apprehended" or "Slain", which is also homage to the Marvel Comics' Uncanny X-Men storyline Days of Future Past.

He also appears in Nova's ending as part of the new Mega Nova Corps along with Proto Man, Beat, Roll and Zero, as well as Thor's ending which was redone to include him along with Ryu and Morrigan.

His other appearance in the game is that of a card in the "Heroes and Heralds" mode, as an "S Rank" card who's primary ability is halving the time used to charge attacks for characters with his secondary ability increasing the chance to gain rare cards of characters belonging to Capcom.

Concept art from Marvel vs. Capcom.

Mega Man in Marvel vs. Capcom: Clash of Super Heroes.

Mega Man in Marvel vs. Capcom: Clash of Super Heroes. 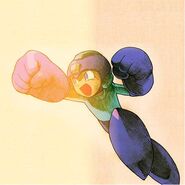 Mega Man in the versus screen from Marvel vs. Capcom 2. 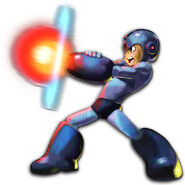 Mega Man Card from Ultimate Marvel vs. Capcom 3's "Heroes and Heralds" mode.
Add a photo to this gallery
Retrieved from "https://megaman.fandom.com/wiki/Mega_Man_(Marvel_vs._Capcom_series)?oldid=317572"
Community content is available under CC-BY-SA unless otherwise noted.