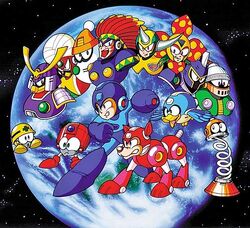 Script from the game Mega Man 6.

Narrator: In the year 20XX AD...
The 1st Annual Robot Tournament was held with 8 of the world's most powerful robots. But... Mr. X, the sponsor of the tournament, took control of the robots and began to take over the world.

Mr. X: It's time to tell you the truth. I have been manipulating that fool, Dr. Wily from the beginning. But now I no longer need Dr. Wily's help. Come and face my power, Megaman!!

(After defeating all eight Robot Masters, Mega Man confronts Mr. X in his fortress and eventually defeats him.)

Mr. X: My scheme for world domination has faild!(1) But I still have enough power to destroy you!

(Mr. X reveals himself to be Dr. Wily and flies away in his space saucer.)

(Mega Man fights through the rest of Wily's fortress until he encounters the scientist again and defeats his battle machine. This time however, Mega Man captures Wily and delivers him to the authorities, who put him in prison.)

Narrator: Triumphant at last, Megaman arrested the notorious Dr. Wily and brought him to justice. Sentenced to prison for his crimes, Dr. Wily now rules over a prison cell. At long last, the world is at peace.