Celebrate 25 years of Mega Man with this latest graphic novel installment of the Mega Man graphic novel series! Mega Man's adventures span the world over as our true blue hero battles a host of villains including Break Man, The Emerald Spears, and many more! Celebrate along with the blue bomber as he's awarded the key to the city--but will he survive the experience?

Mega Man 6: Breaking Point collects issues #21-24 of the Mega Man comic book series, including "For the Bot Who Has Everything", a Mega Man birthday celebration which ties into the epic Sonic the Hedgehog/Mega Man: Worlds Collide crossover!

For the Bot Who Has Everything

The Return: Prelude to Ra Moon 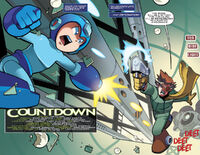 Retrieved from "https://megaman.fandom.com/wiki/Mega_Man_6:_Breaking_Point?oldid=294143"
Community content is available under CC-BY-SA unless otherwise noted.