Fresh from the history-making crossover with Sonic the Hedgehog, Mega Man is back with an all-new adventure! The world has gone dark. Robots have collapsed in the streets.  Mega Man awakes to a world without electricity—and a crumbling civilization! With the help of the brilliant Dr. Light, Mega Man and a handful of Robot Masters are sent to the Amazon to stop the source of the world's power failure. But their mission is not an easy one. The malevolent Ra Moon has awoken, and its out to destroy the world. At its command is the unwitting Dr. Wily and his army of Wily-bots and Robot Masters. Can Mega Man and his friends overcome the odds and save the world? Or is this the end of an era?

Blackout: The Curse of Ra Moon - Part Three: The Eve of Battle 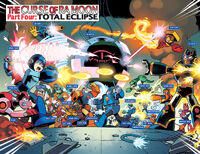 Retrieved from "https://megaman.fandom.com/wiki/Mega_Man_7:_Blackout_-_The_Curse_of_Ra_Moon?oldid=294144"
Community content is available under CC-BY-SA unless otherwise noted.