A new international NetBattling tournament has opened for the world, called the Battle Chip GP. Yai Ayanokoji is sponsoring the event while the others enter it. Even Eugene Chaud enters the tournament, but only for official business. It turns out that there is some type of new organization behind the scenes of the tournament who will delete the winning NetNavi and take its data for themselves. Will Lan Hikari and friends be able to stop whoever is behind these threats?

This game utilizes a different battle system from other Battle Network titles. Instead of battling one or more enemies in real-time with the sole objective being to deplete each enemy's hit points, players duel a single opponent by setting up a "Program deck" of 12 chips and the game selects three chips at random from it and their Navi uses them consecutively, followed by their special attack.[1] For example, if playing with MegaMan he will use the Charge Buster, and if playing with GutsMan he will use the Guts Hammer.

The Program Deck has three columns of chips, with the first column having two chips, the second having three chips, and the last having four chips.[2] Battles progress completely autonomously for upwards of five minutes while the player watches for results. Another interesting aspect is the ability to destroy an opponent's Battle Chips. Certain types of attacks not only do damage to an opponent, but to their ProgramDeck as well (each chip has a set amount of HP).[3]

There is only one row of panels and whether a NetNavi can dodge an attack depends on luck. Fights are won not only by utilizing power, but by deleting an opponent's entire deck, making them unable to fight. If ten turns pass and neither competitor has lost all of their HP, the game determines the winner based on how many chips are left in their decks.[1]

The game's battle system is very close to the Game Boy Advance Yu-Gi-Oh! games, but with a much smaller deck of "cards" and no actual player-controlled gameplay. Also, Mega Chips allow the player to play as the Navi depicted on the chip rather than summon them for an attack. That NetNavi is used for the rest of the battle. This allows for more variety and strategy building.

There is also an "Open Battle" feature in the game that allows players to select a certain area with a set amount of consecutive battles to fight. For every fifth battle, players receive a new Navi Chip to use as well as a variable amount of Zenny.

The game features six different playable character pairs, including: Lan Hikari and MegaMan, Dex Oyama and GutsMan, Mayl Sakurai and Roll, and Eugene Chaud and ProtoMan. There are also two characters exclusive to this game: Kai Todoroki and TurboMan and Mary Towa and Ring. The NetNavi Bass is also unlockable for play.

The exceptions to this are most Solo NetNavis (excluding Bass and FreezeMan, the latter of whom is being operated by Sean Obihiro), and DesertMan and Punk, although they have an operator.

Differences from the WonderSwan version include: 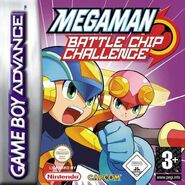 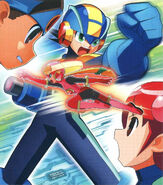