The Mega Man Battle Network series, known as the Rockman.EXE (ロックマンエグゼ, Rokkuman Eguze, also written as Rockman EXE) series in Japan, is the fourth series from Capcom's Mega Man franchise, which started in 2001 with the release of the first game, Mega Man Battle Network. The series was primarily released to the Game Boy Advance.

The series is set in a parallel universe from the original Mega Man series, where the Internet has become integrated with almost every piece of electronic equipment in existence (from TVs to ovens). In fact, it's become so complicated that special programs called Internet Navigators, NetNavis for short, are needed to efficiently process all of the data. NetNavis are stored in hand-held devices called PErsonal Terminals (PET). These devices act as phones, pagers, instant messengers, news beams, and hacking devices all rolled into one, essentially making them portable computers.

The main characters of the series are a fifth-grader named Lan Hikari (光熱斗, Lan Hikari Netto Hikari in Japan) and his NetNavi MegaMan.EXE (Rockman.EXE), this universe's incarnation of Mega Man. Although MegaMan.EXE has no body (unless the PET device itself counts), he can wander around in cyberspace and explore computer systems as if they were alternate worlds. Together, Lan and MegaMan cooperate to fight off cyber criminals and viruses.

The relative peace of ACDC Town, Lan's hometown, is shattered when the infamous net terrorists “World Three” (“WWW”) begin to spread chaos. MegaMan and Lan decide to tackle the problem from two sides—the real world and cyberspace, meeting interesting new people and digital versions of classic Robot Masters along the way. But they have no idea just what the WWW plans to do.

The first Battle Network game set the framework for later series to expand on. It was later re-released only in Japan for the Nintendo DS as Rockman.EXE Operate Shooting Star, an enhanced port and crossover with sequel series Mega Man Star Force.

Main article: Mega Man Network Transmission
Taking place just a month after Mega Man Battle Network,[1] Lan and MegaMan.EXE try to track down the mysterious and destructive "Zero Virus" that has been infecting Navis and causing them to go crazy. As they do so, they meet both old and new faces, as well as a remnant of WWW.

The only Battle Network game to be on a home console, Network Transmission removes Battle Network's overworld and random encounter system in favor of the platforming style the Mega Man series is known for.

Peace has been broken again, but the culprit is not WWW, it's a new Net Mafia called Gospel. Lan and MegaMan work to stop crises as they pop up, and eventually learn Gospel's plan: to create a Super Navi and rule the Net. Can our dynamic duo stop them in time?

WWW is back, but this time their plans seem completely random, ranging from driving animals in a zoo berserk to a phony tournament. Lan and MegaMan must figure out what the WWW is up to and stop them. Along the way, they will learn some shocking secrets involving their family, SciLab, the Undernet, and the Net itself.

A gaiden game taking place after Mega Man Battle Network 3. For the first time players can choose to play as other characters besides Lan Hikari. Whatever character chosen will compete in a series of tournaments, eventually escalating to either a battle against Lan or (if the player chooses Lan) Lan's rival Eugene Chaud.

Battle Chip Challenge is markedly different from other Battle Network games, with the total removal of movement, a complete restructuring of the folder and chip system, and a cast of characters from the three previous GBA games.

As the world's scientists secretly scramble to stop a meteor that threatens to destroy the Earth, Lan and MegaMan enter a series of tournaments in hopes of proving their abilities. However, Nebula, a new criminal organization, has been spreading an alluring power that threatens a Navi's very soul. Can MegaMan resist the temptation of the dark power?

Battle Network 4 greatly changed the series, abandoning the art style and basic game system of the first three games in favor of an all new one. It introduced Double Souls and the Karma system, as well as more extensive version differences.

In this Japan only release, the player can choose a NetNavi from a sizable cast of characters to play the game as. However, unlike other games where the player has full control over their Navi, this time the Navi will move on its own while the player simply selects attacks to use. This was done to simulate what actually operating would feel like.

This game has been officially stated to basically be a test version of Rockman.EXE 5's ability to play as other Navis in battle.[Citation needed]

Intending to spread its dark influence again, Nebula has seized control of several areas of the Net. Lan and MegaMan have been recruited to join an elite team of Navis with the goal of liberating the Net. MegaMan must learn to work with both new faces and certain former foes and rivals in order to save the day. This game expands on Battle Network 4's Dark Chips, rebalances basic game mechanics, and introduces Chaos Unisons and Liberation Missions. Unfortunately, just like its predecessor, legitimate E-Reader bonuses are Japan only.

A remake for the DS, Double Team DS, was later released, expanding on the Team mechanic with features such as the Party Customizer and Navi Assist.

(Unlike previous games, the year in this game is 20XX.)

The final game of the Battle Network series has Lan and his family move to Central Town. But, despite the new environment, their old foe the WWW shows up, this time with the goal of awakening the legendary Cybeasts that rampaged through the Net years ago. MegaMan manages to capture one of these beasts in a last ditch attempt to stop it, but now he must face both WWW and the beast inside him. This game introduced the Cross System and Beast Out and Beast Over, and also revamped much of the customizable features of the series.

Though Beast was half the length of the previous series, another series premiered after it called Beast+, taking elements and characters from Network Transmission such as the existence of Zero.EXE. At this point, the series had become part of the Oha Coliseum programming block in Japan, taking up only a 10 minute time-slot. Beast+ focused on the more obscure, left-over elements from the games that were previously ignored, such as Transmission and the Japan-only mobile game, Phantom of the Network. The twenty-sixth episode of Beast+ marked the series finale, and an anime based on Mega Man Star Force took its place immediately afterwards.

The MegaMan NT Warrior manga authored by Ryo Takamisaki was serialized in Japan's Shogakukan's CoroCoro Comic and later published in thirteen volumes between 2002-2006. The manga was published in English by VIZ Media between 2004-2008, and retains its right to left format of reading. Following suit with the conclusion of the Mega Man Battle Network games, the manga officially ended at Volume 13. The manga was also published in Brazil by Conrad between 2005-2006, but it was canceled after six volumes (equivalent to three volumes of the original, as each volume had three chapters). 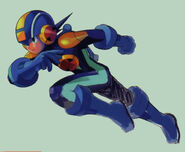 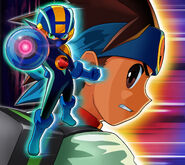 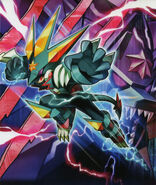