Battle Network 3 is the first game in the series to come in two versions. The original Japanese release started as a standalone game, however a second version titled Battle Network Rockman EXE3 BLACK was released a few months later. Like later alternate versions, it replaced and introduced exclusive Battle Chips, chip codes, a boss, a form change, and a number of cosmetic changes. Unlike later games however, the in-game shop stock greatly differs, there are exclusive Navi Customizer parts, and contains one new boss that doesn’t replace a Navi from the original. Despite releasing later, the same bugs from the original can be found in BLACK.

Story elements from Battle Network 3 were loosely adapted for the First Area of the first season of the MegaMan NT Warrior anime series; namely the N1 Grand Prix, while characters from the game were used in later seasons.

Months after the Netmafia Gospel tried to take over the world in Mega Man Battle Network 2, Lan Hikari and friends return to their ordinary lives, until the crime organization World Three (WWW) started surfacing again. At the same time, a NetBattle tournament called the N1 Grand Prix was being held, in an attempt to find the strongest NetBattler in the Electopia, attracting people from neighboring countries into entering. Lan and MegaMan manage to pass the preliminary rounds, only after numerous attacks by the WWW in an effort to get the TetraCodes. Once Lan and MegaMan get into the N1 Grand Prix, it was discovered that the tournament was a set-up created by WWW to announce their return to world.

Lan and friends, with the help of Eugene Chaud had pieced together the WWW's plan after their attacks on ACDC School and the Yoka Zoo, both of which are hiding places of two of the TetraCodes: needed to revive the monster Alpha, the original prototype of the Internet, and take over the world. As Alpha had went berserk and devoured Navis and programs upon its creation, scientists were forced to seal Alpha to prevent further damage.

In addition to the TetraCodes, WWW needed Bass in order to awaken Alpha. It was revealed that Dr. Wily, head of WWW, was moving behind-the-scenes in Gospel, and had put them to the task of creating a copy Bass specifically for the resurrection. However, this time Wily didn't need a fake Bass because he tricked the true Bass into removing the final security measure on Alpha. When Lan and MegaMan arrived, Alpha was awakened and after a battle with Bass, Alpha appears and devours Wily (who was in the Net via a Pulse Transmission) and Bass. Seeing that, the duo fight Alpha. Once they destroyed Alpha, a door appeared, leading to a Vision Burst of SciLab, where Lan (also on the Net) and MegaMan meet Tadashi Hikari, Lan and Hub's grandfather. Being only personality data, he was only able to give Lan and MegaMan an encoded letter to be delivered to Lan's father, and also remarking on how well Lan and Hub had become great friends and brothers, before the Vision Burst within Alpha collapses. Before being able to jack-out, Alpha captures Lan and MegaMan and begins devouring them, until MegaMan sacrifices himself to save Lan. MegaMan was thought to be deleted, until Lan's father finally decoded the letter from his father, which contained MegaMan's backup data, and Tadashi Hikari's personality data.

Once again, the game introduces a few changes to the folder building system. First, the Library has been split into four portions - Standard Chips, Mega Chips, Giga Chips, and Program Advances. This allows for a more balanced folder whilst allowing for amazingly powerful chips to be used.

The Navi Customizer (NaviCust for short) is introduced in this game. Instead of receiving PowerUps which are used to permanently upgrade the Buster, MegaMan now receives NaviCust pieces that grant him different abilities like the ever-useful Undershirt. Some parts of the plot also require the use of certain parts, like Press and Black Mind. This game is the only one in the series that uses Extra Codes and Color compatibilities, seeing that after MegaMan loses Styles in the following game, the codes and compatibilities are of no use afterwards and are hence scrapped.

Style Changes now serve a different function. Leveling up MegaMan's style no longer improves the damage of his charged Buster, but instead grants him special NaviCust pieces that can be used with the Style. Some existing Styles are also given new innate abilities, like the Custom Style's ability to yield special chips when S-ranking viruses. Three new Styles are also introduced, with two of them being exclusive to either version. However, MegaMan can now only hold one Style.

Finishing off opponents while they are in the midst of attacking - also known as Countering - will now give Bug Frags. These are used in many areas - for trading, virus breeding, and for trading at the Bug Frag trader. This game also introduces the Number Lottery, where the player can input a certain number code to get an item. Often these items would range from Sub Chips to rare chips unobtainable through any other means.

Both versions have identical plots, but distinct qualities unique to each game. White has the standard appearance of buildings and objects, evidenced by ACDC Town's squirrel statue, which is always pink. However, Blue has new color schemes for buildings, and some objects are totally different, such as the squirrel being gold (a color change that becomes prevalent between both game variations in later installments).

This is also the first time different chips can be obtained in separate games, such as unique, one-of a kind Giga Chips, which also becomes the standard among the later games. Giga Chips cannot be traded, but in this game, the Omega Navi Giga Chips are actually duplicated.

In addition, both versions have their own unique Styles that can be obtained by certain conditions. White has Ground Style which is focus manipulating area in combat, while Blue has Shadow Style that have their charge attack make MegaMan become invisible and invincible for a short period of time.

The games also have two separate bosses working with Serenade. White has MistMan, but Blue has BowlMan. As such, their chips must be obtained through NetBattles, not a Chip Trader, and even then, the Mega Chip library isn't complete until the chips of both Navis are traded between separate versions.

Blue Version also allows players to battle Mr. Famous and his Navi Punk outside of the Yoka Zoo, while White Version has Mr. Famous's assistant instead, who will provide the player with helpful tips.

There are secret achievements that can be activated in both games. One Giga Chip is only obtained by NetBattling a friend while both players have at least three stars, and then S-Ranking the friend. It has a 1 in 32 chance of showing up, but can only be obtained once, and these odds improve with additional stars, like the ten secret chips in Battle Network 2.

Even more secrets can be activated at five stars. By holding Left on the D-pad on the GBA at the Start screen and inputting the code, R R L R L R L L, the stars move closer together and make room for two more. After this, fifteen Omega Navis will surface on the Net to fight, and beating them grants the player another star. Finally, using a Program Advance only usable with KingMan V5, BowlMan V5, or MistMan V5, will finish the library of 32 Advances, the second largest P.A. library to date.

Lastly, this is the first time that a final boss will grow stronger after completing all the sidequests. Alpha evolves into an Omega form with new attacks, sporting more HP, after all seven stars are obtained. By beating him, his Giga Chip can be obtained to completely finish the game.

Some bosses are fought more than once in the story. 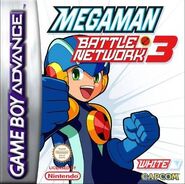 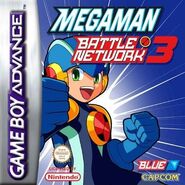 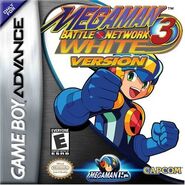 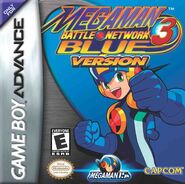 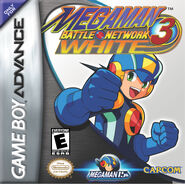 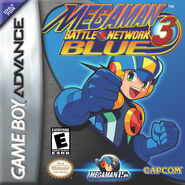 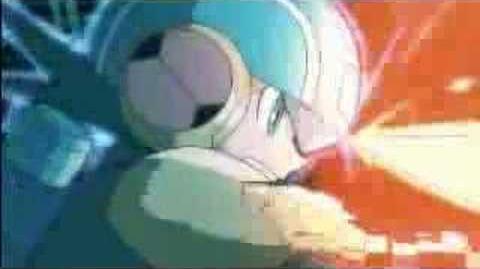