No
Mega Man Battle Network 6, known as Rockman EXE 6​[1] (ロックマンエグゼ６, Rokkuman Eguze Shikkusu) in Japan, is the sixth and final installment in the mainline Mega Man Battle Network series by Capcom released on the Game Boy Advance. It was released in two versions: Cybeast Gregar and Cybeast Falzar, known as ​Cyber Beast Glaga[1] (電脳獣グレイガ, Dennō Jū Gureiga) and ​Cyber Beast Falzer[1] (電脳獣ファルザー, Dennō Jū Faruzā) in Japan. They introduced several new characters, the Cross System and Beast Out as Lan Hikari and MegaMan uncover the history of the Cybeasts Gregar and Falzar.

Though Battle Network 6 ended the story, a final title, Rockman.EXE Legend of Network for cellphones, was released exclusively for Japan the following year.

Thanks to Lan Hikari's efforts, the evil aspirations of Dr. Regal, the leader of the Dark Chip Syndicate "Nebula", have come to a screeching halt, and peace has been restored to the world once again.

Lan has since returned to his normal daily life, hanging out with all his friends. Graduation from elementary school seems to be right around the corner. But that all changes one day when Ms. Mari, Lan's Teacher, tells the class she has sad news. "One of your fellow classmates is moving to another school," she says, calling Lan to the front of the class.

To the class, Lan explains, "...Um, my Dad got transferred, so my family has to move. I'm sorry I didn't tell you guys."

The next Sunday...with everything packed and ready to move, Lan's friends gather around him. Mayl shyly begins to talk. "Lan, I...was just thinking how great it would be if we could graduate from elementary school together, and then go to junior high school together... it'd be so nice.... being together... always... (sniffle)"

"We'll see each other again, and I'll definitely be back someday! So, don't cry...(sniffle)"

"I'm glad you understand. Well, everyone, I better get going. Take care!" And with that, with Lan waving from the back seat, his parent's car heads off for Cyber City where a host of new Adventures awaits.

Link Navis (リンクナビ, Rinku Nabi) are NetNavis of other characters that Lan can operate. Each Link Navi can remove specific obstacles in the internet, has their own Charge Shot, and one exclusive Battle Chip. Their maximum HP increases by 100 as the story progresses, with a max of 800 HP. Except for Custom 1, Mega Folder 1 and Giga Folder 1, Navi Customizer programs are disabled.

Another new status effect is "Bubble", normally caused by the Bubble Star chip series (this status effect became common in the Mega Man Star Force series). Enemies will be encased in a bubble, unable to act, and will take double damage from the next Elec attack.

Lava, Sand, and Water panels do not make a return; however, other new panel types exist. The chips "Coming" and "Going" Roads make draw panels, which do as the name describe. Another panel, which is rare and cannot be made via chips is the Geyser, which periodically causes fire damage to those standing on top of it and may be removed if hit by an Aqua attack. The Geyser panels also have an attack pattern in which they alternate between the player's field area and the enemies' area.

Battle chip exclusive to Link Navis can now trigger counter hit when used at the right timing, allowing for 2x damage for next chip. This was not possible in Battle Network 5.

Chips are now restricted depending on their MB size, and this has hence resulted in many chips (mostly non-boss chips) coming from being Mega chips to Standard chips now, allowing the player to load more Navi chips into the folder. A Tag System also has been introduced, where the two selected chips (both chips' capacities must not exceed 60MB) are "tagged" and always appear with each other in the Custom Screen. Additionally, a notable number of chips have been given the * code, inclusive of some Navi chips, allowing more fluid unicode folders to be constructed in the game, and some * Navi chips are required for Program Advances. These Navi chips include ProtoMan, Colonel, and Bass chips. The Program Advance chips for some of these program advances are WideBlade B, LongSword B and ProtoMan SP B for Double Hero, Vdoll and Bass for Gospel breath.

The Cross System is similar in concept to the Double Soul from previous games, in that MegaMan merges with another Navi (referred to as a Link Navi), but it does not use any Battle Chip sacrifices, and may last for the entire battle unless MegaMan is hit with an attack the Cross is weak to, in which case he takes double damage and loses the cross for the rest of the battle.

Beast Out and Beast Over

Beast Out is when MegaMan absorbs a Cybeast, either Gregar or Falzar, to become Gregar/Falzar Beast MegaMan. During Beast Out, MegaMan gains several abilities, inclusive of a rapid-fire buster, and chips being auto-targeted so short-range chips become more useful. He can also charge non-elemental chips to unleash the Beast Out's special attack. When used with a Cross, this forms a Cross Beast, with the benefits given by the Cross and the Cross Beast having its own unique special attack. Beast Out can also utilize Full Synchro.

Beast Over occurs when a Beast Out or Cross Beast expires due to the Emotion Window counter running out, MegaMan entering a "Tired" state. In this state, he cannot achieve Full Synchro at all (though he can still use Crosses), but gains the option to use Beast Over. In this state, MegaMan becomes fully uncontrollable for the following turn, becoming invincible and randomly jumping about, firing the buster, and using loaded chips with double the attack power. 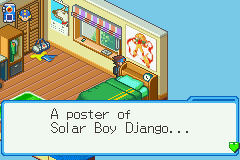 With the Boktai series' dwindling popularity in the US, Konami decided to not release a US version of the third game. As such, Capcom decided to remove most of the Boktai related elements in the game. Gun Del Sol EX, Otenko, Django 1-3, and The Count 1-3 were chips that were removed from the US version. Some, however, can be obtained via golden Mystery Datas (which Capcom forgot to remove). Django and the Count chips both freeze the game, but the Program Advance Crossover (Django 1, Django 2, and Django 3 in order) still function. It, and Otenko, however, use a white dot rather than the actual sprite. The normal GunDelSol chips still exist naturally in the game, as well as the Bat Key and Solar Boy Django/Sol Trance poster in Lan's room.

Another removed feature was additional areas in the game, as well as the area maps located throughout the Net for navigation. Undernet 3 and the Immortal Area were all removed from the US version. Graveyard 1 was also removed (because it had a Boktai related event), while Graveyard 2 remained, renamed simply as "Graveyard". The Bat Key was given a different function. It opened the Immortal Area in the Japanese version, while in the US, it simply opens a purple gate in the Graveyard which has the Attack MAX NPC.

With the destruction of the Dark Chip Factory in Mega Man Battle Network 5, Dark Chips are all but gone. That means that Battle Chips which used to be exclusive only to Dark MegaMan in previous games (e.g. Anubis, Muramasa and Static) can be used by normal MegaMan now, while still holding their usual effects. Also, a Dark Chip-esque Giga Chip is available which modifies the player's charge shot to an extremely powerful attack, only that it depletes BugFrags rather than HP. Bug Rise Sword is one of these chips. This means the removal of the all powerful DS Navi Chips as well, replaced by the V1/V2/V3 and V1/EX/SP system for Navi Chips. Also, since SoulNet was destroyed, MegaMan lost Double Souls as well.

Inside computers where boss fights will occur, a panel with a skull image precedes the boss's zone (with the following cutscene normally triggering immediately after crossing it) warning the player of the incoming battle. This feature was also carried over to the Mega Man Star Force series.

In order of appearance: 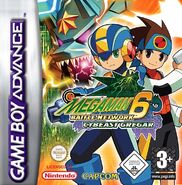 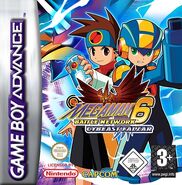 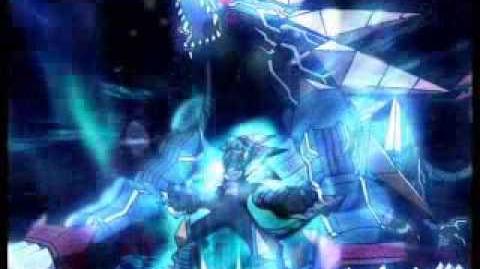