Mega Man Gigamix, known as Rockman Gigamix (ロックマンギガミックス, Rokkuman Gigamikkusu) in Japan, is a Mega Man manga drawn by Hitoshi Ariga and connected with Mega Man Megamix. The manga was published by BN in three volumes between 2009-2010 in Japan and by Udon Entertainment between 2011-2012 in the United States. It was republished by Fukkan.com in Japan in 2015, and this version was published in France by nobi nobi ! in 2017.

Asteroid Blues (アステロイドブルース, Asuteroido Burūsu) is a story from volume 1 based on the events of Mega Man 3, taking place between the stories "R Destruction Order" and "Metal Heart" from Mega Man Megamix.

Dr. Wily has finally been arrested. Some months later, an asteroid with mysterious ruins was located, and they contained eight powerful Energy Elements (also called Energy Crystals), but they were heavily guarded by ancient alien technology. The expedition managed to obtain only one of the Energy Elements. Dr. Wily was taken out of prison to help Dr. Light in creating Gamma, a powerful robot to face the alien machines. The two doctors create Gamma in a spaceship, and are accompanied by Mega Man and some security robots watchin over Wily. Sometime during or before Gamma's creation, Dr. Light created Rush to make company for Mega Man while the doctors are busy, and Dr. Wily also made a pet for him, Reggae. Unfortunately, Dr. Wily planned a escape and uses eight robots to attack the ship while he teleports to Earth and uses Doc Robots to steal the Energy Element.

Mega Man has trouble against the robots, and Reggae is destroyed by Break Man, who challenges Mega Man for a one on one fight, making the robots leave. During their battle, Dr. Light appears on a screen to contact Mega Man, and Break Man is distracted when he sees Light, being hit in the face. Dr. Light tells Mega Man that Rush is able to transform to help him, and he must use him to fly outside and stop the ship, as it is going to collide with the asteroid. As Break Man's mask falls, Light recognizes him as Proto Man, and Mega Man wonders if Dr. Light knows the red robot. Mega Man goes out and attempts to avoid the crash, but it is too much for him. Fortunately, Proto Man goes out and helps him by firing a powerful charge shot to change the ship's angle, and it slides roughly in the ground. This alerts the alien robots protecting the asteroid, many of them appearing to attack the ship and forcing Mega Man, Rush, and Dr. Light (in a space suit) to run away and hide. Gamma comes out from the ship and destroys the guardians, and Dr. Wily appears to tell Dr. Light about his plan, teleporting away with his robots, leaving Gamma to do the job.

Without a choice, Mega Man tries to stop Gamma, and Dr. Light tells him that he left a weak point on Gamma because he didn't completely trust on Wily. Despite knowing its weakness, Mega Man and Rush have trouble against the giant robot, but manages to defeat it with Proto Man's help. After repairing the spaceship, Dr. Light and Mega Man return home, with the two having a conversation while Light makes some repairs on Mega Man. Proto Man enters the damaged teleporter used by Wily, going to his hideout. Wily, angry with Gamma's defeat, orders his robots to attack Proto Man, who simply smiles as the story ends.

Burning Wheel (バーニングホイール, Bāningu Hoīru) is a story from volume 1 based on Mega Man Battle & Chase and Mega Man 7, taking place after the story "The Strongest Enemy to Date" from Mega Man Megamix.

A large bridge connecting Japan and the United States was recently completed, and to commemorate, a race of robots called "Battle & Chase" is held in the bridge. Roll decides to participate and Kalinka assists her. At first Mega Man didn't wanted to race, but Shade Man and Slash Man persuade him to do so by saying that Dr. Wily is going to enter the race. Other robots in the race include Auto, Guts Man, Ice Man, Bass, Quick Man, Shadow Man, Napalm Man and Spring Man.

A powerful alien robot is after the evil Dr. Wily to destroy him, and he defeats anything that tries to stop him, including Bass and the Wily Numbers from Mega Man 2, 3 and 7 (excluding Shadow Man and Shade Man) in Wily's fortress. Wily and Shade Man escape the base in a Hogale, but despite the efforts of his robots, the ship is destroyed by the alien robot, along with Wily. However, the Wily in the Hogale is actually a decoy. The real Wily escaped from his base with Shadow Man and went to Dr. Light's laboratory to ask for help. When the alien robot arrived, Mega Man (with the Super Adapter) and Dr. Light's robots managed to harm him, but suddenly hands appear around his body and he explodes, and nine robots appear from his body, the Stardroids led by Terra. Mega Man and Dr. Light's other robots are defeated by them and the laboratory is destroyed.

Moon of Darkness (暗黒の月, Ankoku no Tsuki) is the continuation of White Nightmare.

The Stardroids spread around the world, attacking and defeating several robots, including the eight bosses from Mega Man 5 and Mega Man 6. Terra, in particular, is shown to be able to defeat over 100 robots without effort. Mega Man, Elec Man, Cut Man and Rush go after the Stardroids to stop them while Light and his other robots, along Wily and Shadow Man, stay in the ruined laboratory. Light's lab is suddenly attacked by Venus and Jupiter, and somewhere else, Mega Man and the others face Mercury, Saturn and Uranus. Terra summons Dark Moon, which flies to the sky and covers the Earth into darkness. Both groups have a rough battle against the Stardroids, and when Venus attempts to attack Light and Wily, Roll jumps in the front to protect them, but before Venus can do any harm, he is suddenly destroyed by a mysterious robot called Duo.

Toward a Bright Tomorrow (光る明日へ, Hikaru Ashita e) is the only story from volume 3 and the conclusion of Mega Man Gigamix, continuing where Moon of Darkness left off.

After defeating Venus, Duo fights against Jupiter, and he retreats. Meanwhile, Dr. Cossack's seven robots appear to help Mega Man's group, but for some reason they are out of control and attacks everyone present, and Uranus is destroyed when the seven attack him at the same time, which makes the other Stardroids retreat. When the seven Cossack Numbers harm Mega Man, they look confused and remove seven crystals from their bodies. Dr. Cossack appears with a helicopter and takes them to Dr. Light's lab, also taking the remains of the Mega Man 5 robots with him. The three doctors and their robots work together inside Big Eddie, repairing injured and broken robots. The Stradroids talk about their defeat partners and Terra takes Saturn's power, teleporting inside Big Eddie to attack. Terra teleports Duo to the other six Stardroids, where he is defeated by their combined attacks. Mega Man is fatally wounded, and Terra attacks everyone before leaving. When Shadow Man regains conscioussness, he sees that the robots from Mega Man 2, 3 and 7 that were in Wily's base appeared and are assisting them. In other place, Proto Man decides to fight against the Stardroids, despite being alone and injured. While Light and Wily are repairing Mega Man, Cossack explains to the robots about Duo and the seven Energy Elements that were with his robots. Bass snatches four Energy Crystals for himself and goes after the Stardroids with Treble Boost, and the remaining three crystal are given for Mega Man, Shadow Man and Ring Man. They use one of Wily's remaining skull rockets from the Mega Man Megamix story R Destruction Order to send the three to space, with Star Man protecting it with his barrier.

In space, Bass tries to attack Saturn, but all of his attacks are taken by his Black Hole. Angry, Bass takes away his four energy crystals and throws them at Saturn, blasting them afterwards, causing a powerful explosion that destroys Saturn. Ring Man has a tough battle against Pluto, but he manages to defeat him. Mercury, Mars and Neptune attack Shadow Man, but as the three are too much for him he retreats with a kawarimi, hiding into one abandoned station. Mega Man destroys Jupiter and goes after Terra. Inside the station Shadow Man finds Proto Man injured, and the three Stardroids appear. Shadow Man stabs Neptune and Mercury and throws himself in Earth's direction with them, apparently burning them when entering the atmosphere. Quick Man appears and rescues Shadow Man with the Mecha Dragon, but Mercury suddenly appears and punches through Shadow Man, taking his energy crystal. Mercury is finally destroyed by Quick Man, which appears to slice Mercury continuously at high speed, leaving him unable to regenerate himself. Proto Man stops a missile from Mars' head with his own buster, exploding both of them. Mega Man defeats Terra, and Sunstar (Sungod) emerges from Dark Moon for the final battle.

White Nightmare, Moon of Darkness and Toward a Bright Tomorrow: 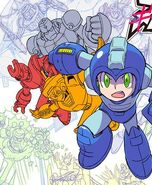 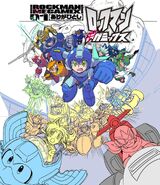 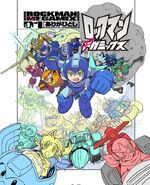 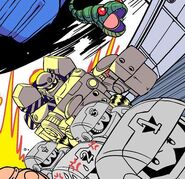 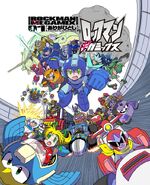 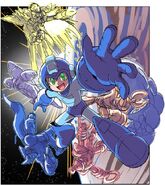 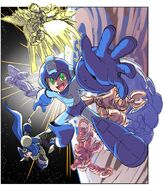 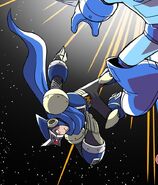 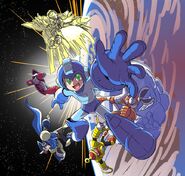 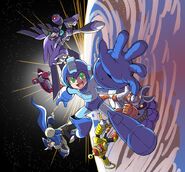 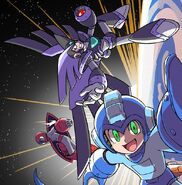 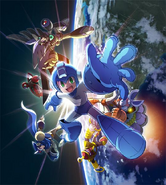 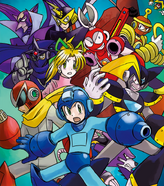 Bookmarks artwork
Add a photo to this gallery

Retrieved from "https://megaman.fandom.com/wiki/Mega_Man_Gigamix?oldid=312307"
Community content is available under CC-BY-SA unless otherwise noted.