Mega Man IV follows the general pattern of previous Game Boy titles, combining content from existing NES titles with unique content and features. As with the previous Game Boy entries, the Robot Masters are taken from two different NES titles, with the first four taken from Mega Man 4, while the latter four come from Mega Man 5. Also following this pattern, the first four Robot Masters must be defeated before the second set of four can be accessed. Beat also appears, able to be called for assistance once Mega Man has obtained the B, E, A, and T plates found in the levels of the first four Robot Masters. Stages can be revisited after the Robot Master has been defeated, allowing Mega Man to collect items found in the stage, including key items such as plates.

Mega Man IV introduces elements from the NES series of games which previously had not been seen on the Game Boy. Most prominently, this includes the boss rematches.

Additionally, Mega Man IV adds a number of new features not seen in any previous titles, Game Boy or NES. The stage select screens have been changed from the typical grid layout to a top-down rotating view, with the bottom portion of the screen reserved for showing stylized artwork depicting the selected Robot Master and their stage. Also unlike Mega Man III where the stages of the first four Robot Master were inaccessible once the last four were unlocked, this game fixes that issue through the use of the B Button to switch between both Stage Select Screens. Several new collectable items have been added, specifically Weapon (W) Tanks, Super (S) Tanks, and Mini Energy Tanks, four of the latter combining to form one traditional Energy Tank. Mega Man IV also includes the Energy Balancer. The Super Mega Buster now has a small amount of kickback when fully charged, pushing Mega Man a small distance in the direction opposite where he is aiming. While Mega Man's health is automatically restored between stages, Special Weapon energy is not, though it can be done at Dr. Light's Laboratory between stages in exchange for P Chips.

Perhaps the most noticeable new feature in the game is the introduction of P Chips, the earliest version of what would later become Screws in Mega Man 7. Appearing as cylindrical capsules bearing a flashing letter P, P Chips can be found throughout the game, either placed in the level or randomly dropped when an enemy is destroyed. P Chips have no immediate function when collected, but are used after completion of a level, when Mega Man is given the opportunity to travel to Dr. Light's Lab. There, P Chips can be used by Dr. Light to replicate items of Mega Man's choosing, including 1-UPs, various Tanks, the Energy Balancer, and an immediate recharge of all of Mega Man's special weapons.

This game is currently available for download on the 3DS Nintendo eShop.

In the year 20XX, a few months after Mega Man III, scientists all over the world have gathered in the annual World Robot Expo (世界ロボット博覧会, World Robot Expo), where they show their latest creations, robots developed for world peace. Dr. Light took part in the expo alongside Rock, Rush, and Beat. A variety of industrial robots were presented, but suddenly a dubious UFO appeared in the sky. Dr. Wily reveals himself and announces that he will be using the robots from the exposition to help him in his quest for world domination, using a radio wave to control the robots. Rock and Rush aren't affected due to their circuits having a strong sense of justice, but Beat loses four of his parts in the commotion. Dr. Light quickly returns to his laboratory to change Rock into the combat robot Mega Man. Meanwhile, Dr. Wily scatters the controlled robots to cause havoc in the city. Ready for battle, Mega Man must stand up against the expo's newly developed, high-performance robots and stop Dr. Wily, and if possible also find the parts Beat dropped so he can assist him.[2]

Mega Man manages to defeat the first four Robot Masters and make his way to Wily's fortress, where he encounters a new Mega Man Killer named Ballade, and although he defeats him, Ballade promptly leaves, opening the way up to where four more Robot Masters lay in waiting. However, after Mega Man defeated them, he made his way to where Ballade was waiting and defeated him for a second time, acquiring the Ballade Cracker, which he used to blast his way out of Wily's crumbling fortress. Mega Man made his way to the Wily Battleship and defeated Wily, but was trapped in the fortress when Wily activated a self-destruct mechanism. However, Ballade had a sense of self-sacrifice at the last minute and saved Mega Man in the end.

Mega Man IV has been well-received critically. Major gaming magazines Nintendo Power and Game Players have called the graphics and gameplay "exceptional" and "terrific", although the former was disappointed by its few surprises.[3][4] Electronic Gaming Monthly abridged, "Mega Man...again. Oh well, Capcom has a way of creating the Mega Man series over and over again while still being fun to play. New bosses and weapons spice up the game while the levels are still challenging with their confusing twists and turns. The blurring is still a reoccurring problem when Mega Man is on the move, but it doesn't detract from the absolute fun Mega Man always delivers."[5]

Mega Man IV was re-released on April 13, 2001 for the Nintendo Power cartridge service in Japan alongside its four Game Boy counterparts.[6] The 5 games that comprise this subseries were to be released on a Game Boy Advance compilation in 2004, but was cancelled.[7] The boss Ballade would later appear as part of a downloadable content stage for Mega Man 10 in 2010.[8] On July 18, 2013, it was confirmed that Mega Man IV is planned for release on the 3DS Virtual Console[9] which came out in October 23, 2013 in Japan and on May 15, 2014 in North America.[10] 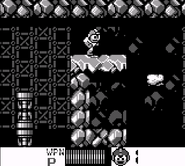 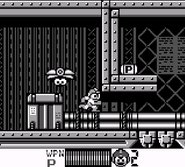 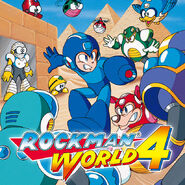