Mega Man #1 is the first issue in the Mega Man comic book series by Archie Comics, released in May 2011.

The future looks bright when brilliant and benevolent Dr. Light unveils his latest creations: the Robot Masters! But when the nefarious Dr. Wily steals them for his own sinister purposes, there is no one left to stop him. No one – except Mega Man! Don’t miss the first issue of this brand new ongoing series!

Let the Games Begin! - Part One: Trouble Get!

The story begins with Mega Man trying to infiltrate Wily's robot factory. He doesn't want to fight, but he must do so to stop Dr. Wily. Mega Man uses the Super Arm to open the door and throws it at the Big Eyes, destroying them. Inside Wily Castle, Mega Man is attacked by the Yellow Devil and they prepare to fight, Mega Man thinking how things came to the current situation.

The story then starts from the beginning, with Rock and Roll helping Dr. Light prepare for his speech. Dr. Wily appears backstage, demanding that Dr. Light allow Wily to give the speech alongside him. Dr. Light declines, causing Wily to react a bit more hostile. As Dr. Light heads to the stage to begin his speech, Wily begins to plot. Later that night, when Rock and Roll get Dr. Light to bed, Wily enters the lab secretly. He then takes the six Robot Masters: Cut Man, Guts Man, Ice Man, Bomb Man, Fire Man and Elec Man.

In the morning the group sees the news, hearing how Dr. Light's Robot Masters are attacking the city, followed by a broadcast by Dr. Wily, demanding that everyone surrender to him immediately. Feeling hopeless, Dr. Light sulks in regret. Rock, feeling like he has to do something, tells Dr. Light that he wants to become a battle robot. Reluctant but proud, Dr. Light starts to convert Rock into a fighting robot. Upon hearing the name the Mega Buster, Rock's new weapon, he decides to name himself Mega Man.

Dr. Light finishes the upgrade process of Rock into a super fighting robot, but he has an awful appearance. Mega Man than gives the address of the comics mail before Dr. Light starts fixing his appearance.

In May 2012, this issue was reprinted for the Free Comic Book Day with a colored version of the Sketch Variant. The issue includes bonus features and a preview of The New Crusaders.

"Let the Games Begin!" - Don’t miss the first classic issue of the hit new MEGA MAN comic series! The future looks bright when brilliant and benevolent Dr. Light unveils his latest creations: the Robot Masters! But when the nefarious Dr. Wily steals them for his own sinister purposes, there is no one left to stop him. No one – except Mega Man! Plus bonus features and a preview of the all-new series: THE NEW CRUSADERS! 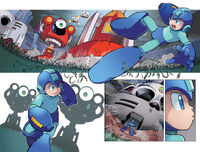