Mega Man #46 is the forty-sixth issue in the Mega Man comic book series by Archie Comics, released in February 2015.

DING DING DING! Get ready for the fight of the century with: Mega Man versus Break Man! 'The Ultimate Betrayal' Part Two: This is it, the day has finally arrived-it's the epic-beyond-epic duel you've been waiting for as brother battles brother and the Blue Bomber brings the ruckus to the Prodigal Son! Everything has been building to this battle of two siblings-and the fate of the world is at stake! The Mega Man 3 game adaptation reaches a fever pitch in this exciting installment, featuring cover art from Patrick 'SPAZ' Spaziante and a special 'brother versus brother' variant by acclaimed artist Justin Harder!

Dr. Wily is continuing to work on a device to allow him to bypass Gamma's security protocols, also vainly bragging that his genius will find a way to prevail and that he'll eventually reign supreme. After checking the output, he estimates that he'll only need a few more hours of uninterrupted work before he achieves total synchronization with Gamma. Doc Robot, via Air Shooter, then arrives and calls out to Dr. Wily, with Wily yelling at him and telling him that he's busy, with Doc Robot, after sarcastically stating that he noticed, tells Dr. Wily that Mega Man had arrived. Dr. Wily is shocked, and asks how he could have tracked his fortress down, as no one was even supposed to know about the island's location, let alone the location of the fortress. Doc Robot guesses that Break Man most likely gave Mega Man the location in order to have a final battle with the Blue Bomber.

Meanwhile, outside the castle gates, Break Man and Mega Man stare each other down. Mega Man walks forward, telling Rush to stay back, making clear he intends for Rush to stay out of the fight, as the fight is strictly between the two brothers. Mega Man then requests that Break Man address something that bothered him before they start fighting: Although he fought Mega Man for no reason, kept Mega Man at bay while Dr. Wily blew up Light Labs, and shot Roll, he also supplied Dr. Light with the key to immunizing him and other robots from Ra Moon's power, helped Mega Man fight Ra Moon's forces, and divulged the location of Wily's current hideout, and then ponders whether he is indeed Mega Man's long-lost brother Blues and that he is working for Dr. Wily, before asking what Break Man's deal was, whether he wants to help him or fight him. Break Man then points his Proto Buster at Mega Man, and demands to know what he is, whether he is Dr. Light's assistant, his weapon, or his son with increasing venom in his voice while memories surge of his past. Mega Man then tells him that he's all of these things while getting his Mega Buster ready, and Break Man attacks, angrily asking "then what am I supposed to be?!".

The two start fighting, and Break Man has advantage due to his shield, Mega Man wondering what it is made of. Mega Man knows that the longer he takes, the more time Wily will have to take control over Gamma, so he thinks in using the weapons he obtained from the eight Robot Masters he defeated, equipping Gemini Laser. However, he changes back shortly afterwards, realizing that he would need the weapons to storm the castle, and decides to make it a buster to buster battle.

Meanwhile, in Light Labs, Dr. Light and Roll finish giving Auto a proper repair, Light apologizing for the rushed patch job he got earlier, and Roll asks if he really is okay, as Dr. Wily literally tore him up. Auto tells them to not worry, noting to Light that getting Mega Man ready for the battle was more important, and to Roll that he doesn't simulate emotions in the same way as advanced robots like her do. Auto asks what they should do next, but without the lab, all they can do is sit, wait, hope, and pray. Roll doesn't like it, but there is nothing they can do at the time. Inside Wily Castle 3, Dr. Wily and Doc Robot use a Met to watch Break Man's battle, remarking that he is out to win and that almost excuses him giving the castle's location. However, considering that he is close to victory and that Light might send backup, Wily doesn't want to take any chances and orders Doc Robot to activate all defenses and prepare to stop Mega Man if he manages to get inside.

Back to the battle, Break Man asks why Mega Man fights so hard for Dr. Light, as he created him and can also unmake him on a whim, and he sends Mega Man to his battles. Mega Man answers that's because he is his father. Break Man disagrees, calling Light a mechanic and Mega Man his creation, and that they are robots that don't have families, but functions. Mega Man sees that Break Man doesn't believe on that, but Break Man yells that he must believe it. Mega Man remembers the conversation he had with Dr. Light about Blues some hours ago. The Mega Buster was upgraded, and Mega Man asks if he really needs to destroy Blues. Light doesn't know what drives him and asks to save Blues if he can, but he must be sure to return home, as he could not stand to lose both of his sons. Back to the battle, Mega Man promises that he won't lose either of them, and after some attacks, manages to take Break Man down with a well timed charge shot.

Break Man asks Mega Man to finish him, as that's how it must end, and Mega Man says that he is wrong, holding out his hand to help him up and saying that's how it must end. Break Man disagrees, believing that it can't work as Mega Man stole his function, but Mega Man tells him to stop being stupid and that he is giving him a function: be his big brother. Break Man extends his hand, but then slaps Mega Man's. Mega Man asks what's wrong with him, and why he doesn't return, and Break Man simply says that's "It's who I am". Break Man blows the floor below Mega Man (who barely dodges) and warns him that the outer defenses are too strong, but he can get inside easier by the sewers. Mega Man asks if he isn't coming back home, and that they can fix him. Break Man says he isn't returning yet, that he doesn't need to be fixed, and before teleporting out, he remarks that Rock gave a "nice shot".

Mega Man silently sits with Rush and uses an E-Tank to recover. Following his brother's advice, Mega Man and Rush infiltrate the sewer system of the base, and fought the opposition in the form of Penpens and Kamegoro Maker. While fighting, he reflected on the events and vowed that after this day, there won't be any more fighting against other robots, heartbreaks or betrayals. After leaving the sewers and passing by some Hammer Joes, they are interrupted by Yellow Devil mk. 2. 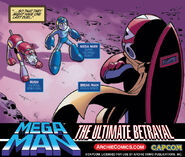 Retrieved from "https://megaman.fandom.com/wiki/Mega_Man_Issue_46_(Archie_Comics)?oldid=286904"
Community content is available under CC-BY-SA unless otherwise noted.