Mega Man #50 is the fiftieth issue in the Mega Man comic book series by Archie Comics, released in June 2015. It contains the fourth part of the Worlds Unite crossover. As a milestone issue, it was released with five variant covers.

Celebrate 50 issues of Mega Man with the latest chapter in the globe-smashing SONIC/MEGA MAN crossover event! "Worlds Unite" Part Four: Act One comes to its mind-blowing conclusion! Sigma's plan reaches its first stage, and the worlds of Sonic and Mega Man have fused! It’s definitely going to take more than one hero to stop the threat from the future—maybe even ten! Sonic, Mega Man, X, Sticks, the Freedom Fighters, Robot Masters and Maverick Hunters—UNITE! PLUS: Stick around for a special bonus anniversary story as Mega Man and X meet for the first time! Featuring a wrap-around cover from the legendary Patrick "SPAZ" Spaziante! PLUS 5 variant covers from Edwin Huang, Irvin Rodriguez, Patrick Thomas Parnell, Roger & Idalia Robinson and part 4 of the epic 12-part connecting variant cover series by artist Ben Bates!

At the hidden lab on the Lost Hex, the Maverick mastermind Sigma, alongside the kidnapped scientists Dr. Eggman and Dr. Wily, witnessed the activation of the Unity Engines giving power to the Master Engine, with Sigma mentioning the humming of the device and asking the doctor what it means as the energy is entering him. Wily then whispers to Eggman that they may have done their work too well, but Eggman says that their true plan hadn't started yet. Sigma then gloated that the Master Engine's power is from the two worlds coming together as one, and explains that with it he will be able to command the Genesis Portals to consume all worlds in existence.

As the worlds of Mega Man and Sonic start merging together, the Roboticized Masters Sonic Man and M'egga Man start their secondary objective is activated, attacking each other to neutralize the other target. Amy Rose and Tails, alongside Flash Man and Hard Man, witness this, and also deduced their connection to their original identities of Sonic the Hedgehog and Mega Man (with Amy Rose wondering what Eggman did to him, and Flash Man expressing suspicion of Dr. Wily's involvement in Mega Man being modified due to the mad scientist doing something similar in the past). Elsewhere, the New Freedom Fighters find Snake Man and Spark Man nearby, with the cybernetic member Bunnie Rabbot asking Sally Acorn whether they should attack the robots or retreat. Sally Acorn, however, is unsure what to do, as while they are robots similar to the one they were fighting, they appear to have been previously fighting against the Sonic robot. Elsewhere, Antoine D'Coolette appeared in front of Break Man and Bubble Man, with Bubble Man telling the other Robot Masters to attack the "giant animal things" before they attack anyone else, with Break Man telling the other Robot Masters not to antagonize them. Part of a nearby building broke apart, endangering civilians, with Sally ordering Bunnie and Gemerl to ignore the robots for now and save those in need, which they proceeded to do by grabbing the woman and the slab with four people on it respectively. United by their mutual goal of aiding the citizens, the two sides soon join forces and are met by the third party of the Maverick Hunters and Team Sticks.

In the federal prison, as Chemical Plant Zone mixes in, causing chaos as many prisoners start escaping or are endangered. Xander Payne knew it would happen, and remembering what he learned with Dr. Kouin, he discovers that the tachyons exposed to his cybernetic eye during his time travel escape have granted him the ability to create Genesis Portals. Deciding this is where his destiny lies, he travels through the portal.

Back at the battle between M'egga Man and Sonic Man, the two continue fighting and decide to deal a mighty blow to each other with their strongest weapons, only for it to undo the robotization process on the both and reveal the mad scientist's coding that pins Sigma as the cause of their problems. At the Lost Hex, the doctors and Sigma each have their own realization. The doctors learn they're in trouble as Mega Man and Sonic were to free each other in the lair and attack Sigma, while Sigma learns of their double-cross from the de-robotization, as the powerful attack should have them destroy each other. The docs flee while Sigma sends half of the Deadly Six in pursuit.

At the fused planet, the confused Mega Man and Sonic watch a G.U.N. carrier merging with the government building and exploding, apparently killing all inside, including Mayor Dorado and Team Dark. Thanks to Drs. Wily and Eggman, the two blue heroes know Sigma is the responsible for the chaos, and as the Mega Man characters lost all memory of the Worlds Collide crossover, Sonic explains the events to them, with Mega Man's skepticism eased when Sonic is able to refer to Roll and Dr. Light as proof. With the threat revealed, all parties unite to take down Sigma. However, Sigma stands at the ready, having been creating an army with his old Mavericks to take them down.

Mega Man is in a training section, and after shooting several targets, ends up exhausted, commenting that he really needs a recalibration. Roll then tells Mega Man that he's already been through a lot that day, and checks his Mega Buster. X appears and is impressed with Mega Man's conviction to be ready to stop Sigma. After Roll is done with the Mega Buster, Mega Man is able to hit all targets. Starting another section, Mega Man and X train together. X comments on Mega Man not being built for combat, to which Mega Man says is due to his decision to fight Wily, who stole Dr. Light's robots and used them in an attempt to conquer the world. While he doesn't mind helping others, it seems the fighting never ends. X says that he can sympathize, only wanting to live in peace but being in constant war, explaining the origin of the Reploids, Mavericks, and Maverick Hunters.

X recalls the Day of Sigma, when Sigma and several other Hunters became Mavericks. Seeing the chaos and realizing after Zero bluntly pointed it out to him that there is no way for a pacific solution, X decided to fight against Sigma's uprising. Noting how Mega Man and Roll were looking to him, he thinks he got a little dramatic. Surprised, Mega Man asks if he went to battle without being weaponized, but X notes that he was equipped with the X-Buster Dr. Light created him with. At one point he lost direction and considered stopping to fight, but his friends reminded him that it was for the sake of everyone else, and is humbled with Mega Man's choice. Roll and Mega Man note that he said he was created by Dr. Light, and X realizes he slipped it, not wanting to pollute the time-stream. He then admits he considered telling Dr. Light not to build him to avoid the wars Reploids would bring. Mega Man tells X not to, believing that the future is safer with someone there to fight for everyone, and who knows what else could happen, like one Dr. Wily's inventions appearing to attack others, and tells him that his "big brother" doesn't want him talking like that. X's spirits are renewed and they finish the training as Zero and Break Man call them over to the war room.

The Sonic Boom counterpart of Sonic the Hedgehog and Knuckles the Echidna congratulate Mega Man for the 50th issue. Knuckles tries to figure out how long he has been around, but is unable to calculate. Sonic says that by the time he figures it out, Mega Man will be in his 100th issue. 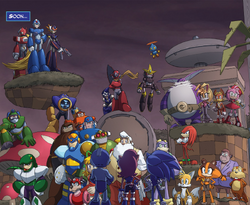 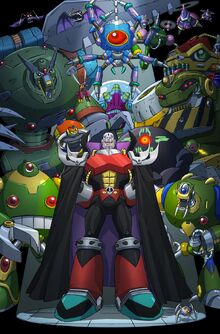 The Choice - Page #1
Add a photo to this gallery

Retrieved from "https://megaman.fandom.com/wiki/Mega_Man_Issue_50_(Archie_Comics)?oldid=256696"
Community content is available under CC-BY-SA unless otherwise noted.