Mega Man #54 is the fifty-fourth issue in the Mega Man comic book series by Archie Comics.

MEGA MAN's long lost brother RETURNS in "Red Shift": Break Man answers the call of... a ghost?! How is it possible that Dr. Wily is STILL alive?! And what haunting secret will he use to keep Break Man under his control? It's up to Blues to do some soul-searching! Will he remain broken, or will he finally become a hero like his brother? Featuring cover art by long-time Mega Man artist Patrick “Spaz” Spaziante and a Proto Man variant cover by comics superstar Brent McCarthy![1]

Taking place some time before Mega Man #53, Blues has removed his Break Man helmet and was pondering his purpose, specifically that he initially thought he was Blues, the son of Dr. Light, yet had no purposes, then he thought he was Break Man, who had a purpose, revenge, but his anger was misplaced. He then decided maybe Mega Man was right and it was time to head home. However, he noticed Shadow Man lurking from behind a tree via the reflection in his helmet, and proceeded to fire at him. Shadow Man rushed out of the tree just as it exploded and threw a Shadow Blade at Blues, with the latter countering by raising his shield. However, Shadow Man leaped over him while Blues was trying to fire at him and grabbed him by the scarf, placing a knife at his throat, telling him he's not here to hurt him.

Blues then points his buster at Shadow Man's face and demands to know why else would he be there stalking him. Blues accepts his fate, but tells Shadow Man that before he faces destruction, he might as well tell Shadow Man that he did not betray Wily, and in fact, he was already dead when he got there. Shadow Man then released him and explained he knew, and that he actually came over to collect him under Wily's orders. Blues is in disbelief that Wily is still alive as he saw he was dead. Shadow Man then interrupts him and tells him to save it, as Wily will explain everything once they meet up, and he's currently programming in the teleportation coordinates. As Blues is picking up his Break Man helmet, he then asks who else knows. Shadow Man then answers that, aside from themselves, no one else.

They then teleport back to the X Corporation's base, where Wily greets Break Man and bids him welcome to his new base of operations, before correcting himself by revealing that it's technically the X Foundation's base of operations, though he'll be running the show soon. Shadow Man then points out that's only the case if everything goes according to plan, and then whispers to Wily he should use discretion. Break Man then expresses shock that he's present and unharmed. Wily then reminds him that he's the reason he nearly got killed due to failing to destroy Mega Man back at Light Labs, and thus ruining his plans again. Wily then revealed that, not being one to give up in the face of adversary, he's already formulated his next plan, alongside his backup plan and the backup plan for that backup plan, confident that he'll at least grind Mega Man down if not destroy him outright.

Break Man then acknowledges that Wily's certainly ambitious, while Wily adds that he's vengeful, something he knows Break Man can sympathize with. He also decided he'll pass on revenge for Thomas Light since he has already embarrassed him thoroughly, and that he'll instead target the other person he desired revenge against: Mikhail Cossack, due to being one of the few people to be suspicious against Wily. Break Man does not understand what Wily is getting at, with Wily remarking he doesn't need to understand and just follow his directives. He then specifically orders Break Man to abduct Kalinka Cossack, Dr. Cossack's daughter, to make up for his failure earlier. After a pause, Break Man then gets enraged and he suddenly grabs Wily by his lab coat and demands to know if Wily's crazy, with Shadow Man taking out a Shadow Blade in defense.

Break Man says that when Wily started, all he wanted was recognition, but now he is blowing up labs and kidnapping children. He brought Mega Man upon himself, barely survived piloting Gamma, and also almost caused Ra Moon to destroy them all. Break Man asks who else has to suffer for his ego, and drops Wily in the table. He continues by agreeing with him that Dr. Light made his mistakes, but they have more than made him pay for them, and what Wily is doing now is just plain wrong. Not wanting to be part of another of Wily's insane mistakes, Break Man says they are through and suggests Wily to also quit while he is behind and avoid other mistake that might not survive. Wily says Break Man certainly won't survive, but Break Man thinks the threat is empty as he fixed his core. However, Wily evilly reveals that he actually replaced his core. As Blues had left Dr. Light, Wily wanted to be sure he would not do same to him before investing in upgrading him, so he replaced his unstable solar core by a deadly nuclear core, which is also unstable. If he leaves, Wily won't maintain his systems, and if his core gives out, he will explode and take many lives with him instead of just collapsing.

Without a choice, Blues goes to Saint Petersburg, Russia. Kalinka is playing with her friends in school when she sees a funny bird robot that calls her attention. Leaving the school grounds, she asks Blues if that is his robot, who informs that he is just taking it to a test flight. Kalinka mentions her father is also working on a bird robot, so it interested her, and during the conversation Blues tricks her to put a teleport harness on her arm, taking her away.

Back in Wily's hideout, Kalinka is locked in a room with Reggae and some toys. Wily congratulates him and says he will be needed to do some errands as Shadow Man is busy overseeing the construction of his castle and maintaining his cover at his observatory work. Knowing that Dr. Cossack might be worried, Wily prepares to call him. Break Man sees Kalinka scared and crying, hoping that a knight will rescue her as she is a princess.

Later, in Geo Works International, Philippines, Vesper Woman is bugging Quake Woman to go with her and leaves. Shortly after Break Man appears and says Quake Woman is making progress, as he can clearly tell she is not happy to see him due to what happened the last time they met. Break Man thinks he should not have come, but Quake Woman convinces him to stay and hear what he has to say. After he explains his feelings and what he went through, Quake Woman suggests him to return to his home. Vesper Woman returns and teases Quake Woman by saying she didn't want to go with her to stay alone with her boyfriend. Quake Woman introduces the new robot to Break Man and mentions that Dr. Noele Lalinde built her in hope of restoring her emotions. Seeing that Dr. Lalinde would go so far to help her, he wonders if she could help him and asks to see the doctor.

Blues talks with Dr. Lalinde and explains about his dangerous nuclear core. After a short examination, she explains that his core is a danger only to himself as the casing is securely sealed and there is no risk of detonation as he is, but if he needed to fight and got a direct hit, it might be dangerous, and should put his shield to good use. Still, the core is unstable and he will eventually shutdown, but he is not a bomb. Quake Woman is worried that he might be dying, but he says he was doing that for years. Angry, Blues realizes Wily lied to him and made him kidnap Kalinka, but as he is drawing out Mega Man, that means all the attention will be on him, including Wily's, so no one will notice what he will be doing. Lalinde says that although she can't fix him, she knows someone who can. Blues says he don't has the right to ask anything for Dr. Light, which Lalinde says he doesn't need to as he loves him. Blues notes that only now he realizes it, but he wants to earn it for himself, and asks Lalinde to not tell Dr. Light that he was in her lab nor what she found about his core so he won't get worried. Lalinde thinks he has a misplaced, chivalrous martyr complex, and is indeed his father's son. Looking to his reflex in the helmet's visor, Blues says he has not yet earned the right to be his son, and breaks part of the helmet. Placing it on his head, he notes that one day he may be Blues again, but for now, he is just the first of his line, a prototype to the Robot Masters, "Proto Man".

Mega Man, Roll, and Blues are at a cliffside, with Roll asking if Blues is ever worried for the future. Blues denies that's the case, acknowledging that as long as a Mega Man is present to set right what went wrong, they'll always be together as the future doesn't stand a chance. As he is saying this, clouds form the images of Dr. Wily, Ra Moon, Sunstar, King, Bass, Sigma, and Lumine.

Cover process for the main and variant covers by Patrick Spaziante and Brent McCarthy. 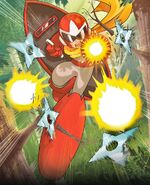 Page four, pencilled.
Add a photo to this gallery

Page #5
Add a photo to this gallery

Retrieved from "https://megaman.fandom.com/wiki/Mega_Man_Issue_54_(Archie_Comics)?oldid=308721"
Community content is available under CC-BY-SA unless otherwise noted.