Mega Man #55 is the fifty-fifth issue of the Mega Man comic book series by Archie Comics, and the final issue before the series went on hiatus.[1] Due to the hiatus, remaining issues from subscriptions are transferred to Sonic Universe, unless the reader wants to change it to other series from Archie Comics.[2]

THE MEGA-EPIC, MEGA-MOMENTOUS LAST ISSUE OF MEGA MAN BEFORE HIATUS IS HERE! “Everlasting Peace”: When an experiment at the Chronos Institute goes awry, Dr. Light is sent on a journey through time and space! Join us as we follow Mega Man across the ages and learn what it really means to be “Mega Man”! What legacy will the Blue Bomber leave and what will Dr. Light gain from this epic journey? Find out as we take a historic glimpse into the legendary adventures of Mega Man featuring the worlds of Mega Man, Mega Man X and even further beyond for the FIRST TIME EVER with the worlds of Mega Man Zero, Mega Man ZX and Mega Man Legends! Featuring cover art by the legendary Patrick “Spaz” Spaziante and a really rocking “ROCK MAN” variant cover by long-time Mega Man artist Ryan Jampole![4]

One week before Mega Man #53, at the Chronos Institute, Mega Man and Time Man employ the power of Time Slow to allow Dr. Light and Dr. Shou Kouin to adjust the flow of tachyons on the Time Skimmer while Roll, Rush, and Flash Man look on. A surge of energy hits Dr. Light, whose mind is opened to events of the future, starting with the conflict between Mega Man and Dr. Cossack's Robot Masters (Mega Man 4). Dr. Light also sees a robot that looks similar to another Copy Robot fighting against Mega Man, with visions of the Mega Man Killers, the Genesis Unit and the Wily Tower in the background (Mega Man: The Wily Wars and Mega Man II) and later sees what appears to be Proto Man controlling a wave of Robot Masters against Mega Man, not believing it was him doing so (Mega Man 5).

Dr. Light also sees Mega Man fight against what seemed to be alien robots with an appearance of a worried looking Roll and an evil looking Ra Moon (Mega Man V). He then watches as Mega Man contends with a force of Robot Masters with "foreign designs", sent against him by a villain that appears to be Mr. X (Mega Man 6). He sees Mega Man and Rush battle with Bass and Treble while also finding out that Dr. Wily still lived and eight more Robot Masters would get in Rock's way (Mega Man 7). Dr. Light wonders if the battles ever end and asks for Wily's means for this as he sees Mega Man, Proto Man and Duo fight against eight more Robot Masters (Mega Man 8). He sees another Robot Master control his own army against Mega Man, Proto Man and Bass and wonders whether Xander Payne was right on his perspective of robots (Mega Man & Bass).

Dr. Light later sees his own creations and wonders why they look so sad, while a countdown reaches zero (Mega Man 9). He also sees eight other Robot Masters fight against Mega Man, Proto Man, Bass, Rush, Tango and Beat who appear to have been driven mad and wonders what could corrupt their programming and make them behave so wildly (Mega Man 10). Mega Man shouts for Dr. Light to hold on as he feels his mind strain as he sees Wily shake hands with an older version of Wily. He wonders how far ahead he was seeing as he soon witnesses Mega Man be transformed into Quint and sees himself work on X while Wily encases a red robot of his own.

Dr. Light sees X stand amongst more of his kind (Maverick Hunters and Dr. Cain), shocked at the fact they were more advanced than any Robot Master he has ever seen (Mega Man X series). He sees X, Zero and Axl fight against strong opposition, still wondering if the battles will ever end (Elf Wars). His mind peers even further into the future, witnessing a time when new heroes will contend with the consequences of their world's past mistakes (Mega Man Zero series). He later sees more persons and can't tell if they are humans or robots (Mega Man ZX series). Dr. Light later sees a vision of where the world is in flooded ruins and both man and machine live happily together and appear to have become one (Mega Man Legends series).

Dr. Kouin brings the paramedics to Dr. Light's aid just as Flash Man's Time Stopper wore off and Light came to. The paramedics ensure that he is well and Dr. Light, barely remembering what he saw, refuses to believe that he will set humanity on a doomed course since life will always be filled with adversity but there will still be a Mega Man to protect everyone. Rock asks Dr. Light if he is sure he is okay and Dr. Light replies that he is thanks to him. 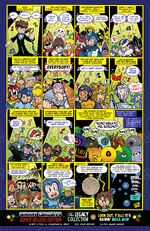 Everyone gathers to sing We'll Meet Again as a farewell, including several versions of Mega Man, some villains, and the Devil robots in the chorus ("Bumo arigatō, Mr. Robumo"). In the end Mega Man thanks all readers and Mega Man Volnutt complains that he is still stuck in the Moon.