The first Mega Man Killer that was created by Dr. Wily, Enker, fights against Mega Man in the Wily Castle. Despite being a powerful foe, Mega Man is able to defeat him. In some sources related to the game, Enker is designated as a "Mega Man Hunter" instead of a Mega Man Killer.

Inside the Wily Station, Mega Man faces the second Mega Man Killer, Punk. Like Enker before him, he is a strong opponent, but is defeated.

The third and final Mega Man Killer, Ballade, is introduced. Being confident in his power, he challenges Mega Man twice, but is defeated in both battles. Realizing his mistake, in the end he sacrifices his life to help Mega Man escape the Wily Battleship before it explodes.

The Mega Man Killers are the bosses from the three DLC Special Stages.

The Mega Man Killers first appeared in issue 20, with Dr. Wily, the Genesis Unit and a defeated Time Man inside the Chronos Institute. However, when Mega Man came, Dr. Wily dispatched the Genesis Unit to take care of him, which Enker obviously dislikes, since his group was made for destroying Mega Man, not them. Wily tells Enker to not sass him, and that the Mega Man Killers will be the final line of defense.

The Mega Man Killers made an appearance in the Sonic/Mega Man Worlds Collide crossover in Mega Man Issue 27. The Killers acted as guards and fought Mega Man, Sonic, Tails, and Rush. During the fight, Punk accidentally destroyed Enker by ripping him in half, and Punk was destroyed by Mega Man. However, when Sonic spin-dashes into Ballade, while at the time the Killer was preparing to launch a Ballade Cracker, this causes it to fire accidentally...into Tails, injuring him and putting him out of the fight as Rush escorts him out to safety. It was also implied that the Mega Man Killers, or at least Ballade, were time-cloned from a time period before they met Mega Man, due to Ballade expressing confusion regarding his sacrificing himself to save Mega Man. 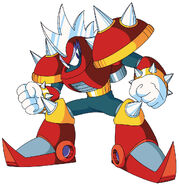 The Mega Man Killers and Quint in Mega Man V.

The Mega Man Killers, as they would have appeared in Rockman Online.