Mega Man Maniax, known as Rockman Maniax (ロックマンマニアックス, Rokkuman Maniakkusu) in Japan, is a manga based on the Mega Man series, originally serialized by Hitoshi Ariga in the May 1997 to March 1998 issues of Comic BomBom under the title Rockman Chronicles (ロックマンクロニクル, Rokkuman Kuronikuru). Most of the manga is essentially essays by Ariga and a few pages of columnized gag shorts, with numerous projects requiring reader participation. Some of the shorts were included in the first reprints of Mega Man Megamix, and on July 11, 2011, Rockman Maniax was released by Wedge Holdings, including all the serialized works, as well as uncollected short stories and setting documents.[1] It was later reprinted by Fukkan between July 22 and August 20, 2015, as a new edition in two-part volumes, one focused on early works and four-panel manga, and the other on short stories, settings, and interviews.

The Mega Man Maniax shorts have a variety of content, such as essays and gag comics. Readers could also participate during its original publication, including sending time attacks, suggesting which robot Wily should introduce, and submitting characters to Dr. Auto's Laboratory.

Mega Man's Soccer (ロックマンズサッカー４コマ劇場, Mega Man's Soccer) is a large series of many small, comedic comic strips based on Mega Man's Soccer, written during 1994 in Comic BomBom and included in Rockman 4Koma Dai Koushin, the 2003 releases of Mega Man Megamix and the Rockman Maniax compilations. Below are the sections for the comics:

Short stories based on the five Game Boy games.

Natsuyasumida yo Rockman (夏休みだよロックマン, Natsuyasumida yo Rockman lit. "Rockman's Summer Vacation") has Mega Man and the Robot Masters going in a summer vacation to have fun in a beach, except for some small problems. Ice Man overheats and had to stay on the water most of the time, while Elec Man learns that it isn't a good idea for him to go in the water, and Dust Man gets busy cleaning the mess from the other robots. Dr. Wily used Air Man to cool himself, and when he learns that everyone went to the beach and he wasn't invited, he rushes to the area despite being already night. However, his rushed work caused the Wily Machine 4 to explode, creating fireworks for everyone in the beach to admire.

The Evil Genius Dr. Wily's Robots 101 (悪の天才Dr.ワイリーのロボット入門, Aku no Tensai Dr. Wairī no Robotto Nyūmon) has Dr. Wily explaining about his robots, introducing several ways to use them for world domination. This short was included in the 2003 Rockman Megamix release, in Rockman Maniax, and in Comic BomBom Special #96: Saishinban Rockman Daihyakka.

For Dr. Wily, the first step toward world domination is having robots able to cause damage, as harmless robots are useless. He notes that missiles and laser beams don't necessarily define a robot's ability to deal damage. Using Pickelman and Bunby Heli as examples, he shows that even peaceful construction robots can be turned into a combat robot just by adjusting their AI processors, with Pickelman throwing his pickaxe as a weapon and Bunby Heli swooping down on and colliding with targets.

Next, Wily notes that the attacks used by the robots must be varied to have the upper hand in battle, keeping the enemy guessing what they can do. He starts with basic examples: Bombombomb, Press, Petit Snakey, Pakatto 24, Subeil, and Count Bomb.

Afterwards Wily notes to don't understimate minor robots as they are tough and do a great job slowing down Mega Man, giving him enough time to carry out his plans and focus on his research, considering them valuable members of his team. He them shows more advanced examples: Adhering Suzy, Mole, Pole, Taketento, Mizzile, and Ben K. Wily notes that there are many other powerful minor robots, but there isn't enough time to introduce them all one by one, and sometimes it's difficult to figure out how best to use them in his plans. Whether they are his own creations or not, he cares for all of them equally. Two group images of all original minor robots from the Game Boy games are shown before he continues, saying that he does his best even if it is just for the Game Boy, as complacency only leads to regret.

Wily then introduces the evolutionary process by series of two robots: The Metall and Joe models. Identifying the weakness of the robots and making appropriate modifications to establish an entire series of that robot type is the first step toward making real progress, wenting through many upgrades and cost reductions. Wily also notes to not be afraid to make mistakes, as one can only make progress by learning from his mistakes.

With the Metall, Wily added feet to make it mobile (Neo Metall), them propellers to be able to fly (Metall DX). He also tried to enlarge it (Giant Metall and Metall Daddy) and shrink it (Metall Mommy and Baby Metalls), made several variations, like Metall EX (an upgrade), Metall Swim (underwater combat), Space Metall (space travel), and Metall Sniper (experimental upgrade), and used it as the AI for machinery (Metall Cannon and Metall K-1000).

Changes to Sniper Joe include integrating the shield on its body (Hammer Joe), reducing weight (Skeleton Joe), powering it up (Crystal Joe and Piriparee), and taking advantage of its humanoid form to make it act as a pilot, be it of land (Sniper Armor), aerial (Apache Joe), or marine (Rider Joe) machines, and also to control other devices (Cannon Joe).

Wily proceeds to talk about developing large-scale enemies, which can be quite useful when placed strategically in front of boss chambers and ladders. Examples presented are Big Eye, Jumbig, Bikky, Power Muscler and Power Slam. Though each of them is quite powerful in their own, they are still minor enemy characters, and sometimes Mega Man will simply run past them, but they are still useful to slow him down, specially when well placed.

By developing mini-bosses strong enough to slow down Mega Man, one of them may even be able to defeat him, posing a seious threat that can't be ignored by him. Wily showcases Friender, Big Snakey, Tama, Whopper, Moby, Kabatoncue, Escaroo, Octoper OA, Metall Potton, Gorilla Tank, Gamarn and Gamadayu, T. Khamen, Hyoey and Tyhorn.

After giving a good understanding of how to strategically place various minor robots, Wily says it's time to teach about the boss robots, revealing secrets he never released to the public before, and he asks to not tell Mega Man about it. He gives details about Fire Man, Heat Man, Cut Man, Quick Man, Elec Man, Spark Man, Air Man and Gravity Man. Wily says there are more bosses, but that's it for now.

Lastly, Wily talks about powerful robots suitable for the final battle, mainly the Yellow Devil System (Yellow Devil, Yellow Devil MK-II and Dark Moon) and the Mega Man Killer Numbers (Enker, Quint, Punk and Ballade). They are some of his most powerful robots, who are the final lines of defense at his fortresses. Wily notes how modifications and the evolution of technology make each robot from the Yellow Devil System series much more powerful than the one that came before, and the Mega Man Killers, as the name implies, are combat robots created for the sole purpose of destroying Mega Man. He also notes that Quint is a special case and may not technically be a "Mega Man Killer", suggesting if he can be considered a "Special Variation Number.001".

Wily concludes by asking if the reader liked his introductory course on the proper use of robots for the purpose of world domination. There are many other robots he wished to introduce, but he may do so later. He says he will never give up on his dream to take over the world, and hopes readers will continue to support his cause by sending in ideas for new and better robots.

Mega Gandhara (メガガンダーラ, Mega Gandhara) is a short story featuring the Genesis Unit that was included in the 2003 Rockman Megamix release and in volume 2 of the 2015 Rockman Maniax.

Wily created three powerful robots, Buster Rod G, Mega Water S and Hyper Storm H, to go after Mega Man and destroy him, but they went out without knowing where he is and got lost, and as they didn't remember where Wily's lab was, they decide to continue with their mission, searching Mega Man until they find him, their long journey presented as a board game with many negative panels that send back to the start and causes the loss of turns. Six months later, they finally find Mega Man and celebrate, with Mega Man not understanding what's up with them and Roll taking him away from the trio. As they forgot that they were also ordered to destroy Mega Man, they considered their mission a success and tried to return to Wily, only finding him one year later. They inform Wily of their success of finding Mega Man, but Wily forgot the Genesis Unit, asking who they were. 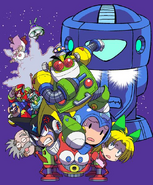 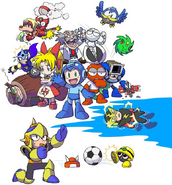